The 37-year-old silenced one and all as he finally laid hands on a maiden Grand Slam trophy. 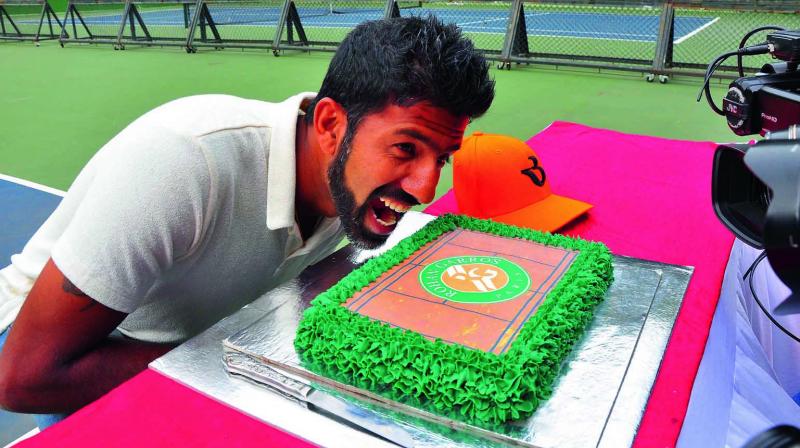 Rohan Bopanna strikes a pose with his victory cake at the KSLTA in Bengaluru. (Photo: Satish B.)

Bengaluru: Mission accomplished! That’s the look clearly etched on Rohan Bopanna’s face as the Kodava lad walked into the KSLTA amongst celebrations which were long overdue.

The 37-year-old silenced one and all as he finally laid hands on a maiden Grand Slam trophy, clinching the mixed doubles title at the French Open with Gabriela Dabrowski on Thursday.

And the magnitude of the victory is such that two days later, the champion is still coping with the feeling of being a Grand Slam winner.

“The feeling is still sinking in over the last two days. All I can say is that I am very proud,” said Bopanna.

“As an athlete, in any sport, you want to reach the highest level and for me also when I started playing and I picked up my racquet winning a Grand Slam was my dream. It’s been so many years of sacrifices, discipline, commitment from not only my side, but my coaches’, family and friends. Everyone has been a huge part of this journey.

“It’s not just been about me. Even though you are the one playing for yourself, the country is watching, supporting you. There have been times where I’ve faced hard losses and people have criticised me but then again I look at the positive side that somebody is thinking about you, you just have to go there and keep fighting and believing,” said Bopanna.

The last time he came so close to laying hands on the trophy was back in 2010 at the US Open, where he and his partner Aisam ul-Haq Qureshi lost in the finals to the Bryan brothers.

It’s been proved over time that every mistake makes you better and years of losses has shaped the champion that he is today.

‘Learnt from experiences’
“From 2010 to 2017 the losses have made me a completely different player. I have adapted to various different styles of plays as I have had several partners. I have had partners who’ve won Grand Slams and I have learnt from their experiences.

“As I said this year I’m playing my best tennis, since I have played with more partners and I have been able to mould myself according to the situation. I have matured more as a player and I know my strengths and what I can bring into a partnership.

“When I stepped onto the court on Thursday there was no pressure. I was very comfortable as a player. The fact that this was a big final was not on my mind. I was ready for it. That was the key step.”