This means Maria Sharapova will not be ranked high enough for direct entry into the U.S. Open. 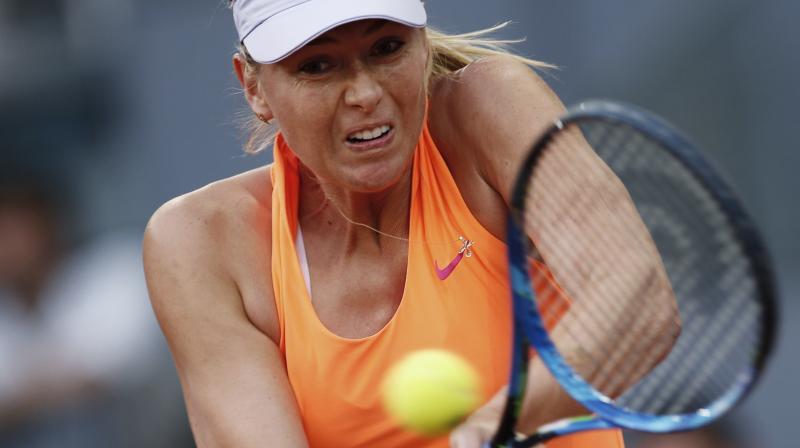 The Russian's low ranking meant she was only guaranteed a place in the Wimbledon qualifying event if she wanted to secure a place in the July 3-16 grasscourt major.(Photo: AP)

London: Former world number one Maria Sharapova will miss the grasscourt season, including this month's Wimbledon qualifying tournament, after failing to recover from a left-thigh injury she suffered during last month's Italian Open.

"After an additional scan, the muscle tear that I sustained in Rome will unfortunately not allow me to compete in the grass court tournaments I was scheduled to play," Sharapova, who is on a comeback trail after serving a 15-month doping ban, said on her official Facebook page.

Sharapova opted not to apply for a wildcard into the main Wimbledon draw after her request for an invite into Roland Garros, where she is a twice former champion, was snubbed by French Open officials.

The Russian's low ranking meant she was only guaranteed a place in the Wimbledon qualifying event if she wanted to secure a place in the July 3-16 grasscourt major.

However, the 2004 Wimbledon champion was granted a wildcard for the grasscourt warm-up tournament in Birmingham, England, which she will also miss.

"I want to thank the Lawn Tennis Association for their amazing support on my return and providing me with a Birmingham wildcard, a tournament which I hope many of you will be able to attend," added the 178th-ranked Sharapova.

"I look forward to meeting you there next year. I will continue to work on my recovery and my next scheduled tournament is in Stanford." The Stanford tournament begins at the end of July.

The five-times grand slam winner, who received wildcards to play in Stuttgart, Madrid and Rome after being left without a ranking when her doping ban ended, retired injured in her second round match at the Italian Open. She was wearing a bandage on her thigh at the time.

Missing the whole grasscourt season means the 30-year-old Russian will not be ranked high enough for direct entry into the U.S. Open, where officials will have to decide whether to court controversy by offering a wildcard.