Nadal's four hour and 48-minute stunner on Court One had knock-on effect of pushing Novak Djokovic's last-16 clash back to Tuesday. 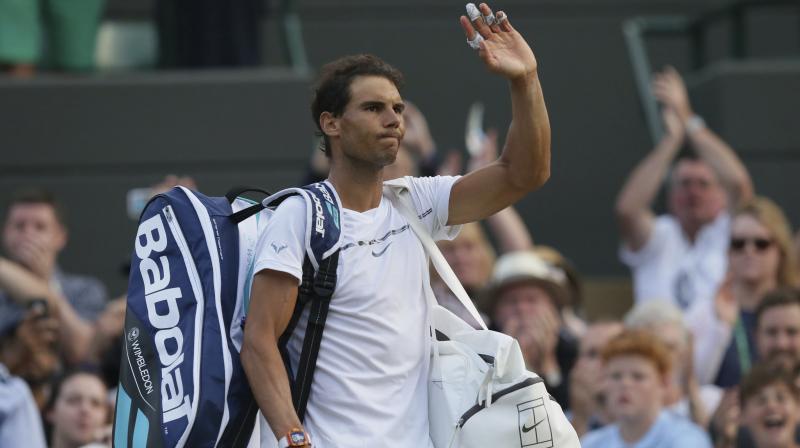 Spain's Rafael Nadal leaves the court after losing to Luxembourg's Gilles Muller in their Men's Singles Match on day seven at the Wimbledon Tennis Championships. (Photo:AP)

London: Rafael Nadal's bittersweet relationship with Wimbledon endured another twist today when he was knocked out in a five-set, fourth round epic by Luxembourg journeyman Gilles Muller.

The four hour and 48-minute stunner on Court One had the knock-on effect of pushing Novak Djokovic's last-16 clash against France's Adrian Mannarino back to tomorrow.

Djokovic had been the last match scheduled on the court but officials chose to postpone the tie instead of shifting it to Centre Court where it could, if necessary, have been completed under lights.

Just weeks after winning his 10th French Open title, Nadal was condemned to his fifth exit before the quarter- finals in his last five visits to Wimbledon. "It was not my best match against a very uncomfortable opponent," said world number two Nadal, the 2008 and 2010 champion. "Well done to him. He played great, especially in the fifth set but I fought to the last ball."

"Tired! It was a long match. I did really well in the first two sets then Rafa stepped it up and in the end it was just a big battle," said Muller, who won on a fifth match point, more than an hour and a half after his first.

In a pulsating final set, which stretched to 95 minutes, Nadal saved two match points in the 10th game and two more in the 20th. In between, Muller had to fight off a break point in the 13th game and four more in the 19th. Nadal was always chasing the score and he finally cracked in the 28th game of the decider when he went long with a return.

"I said, 'just give it a shot, go 100 percent', and it's a great feeling to be winning that match," added Muller whose only other win over the great Spaniard also came at Wimbledon, 12 years ago.

Defending champion Murray reached a 10th successive Wimbledon quarter-final with a 7-6 (7/1), 6-4, 6-4 win over France's Benoit Paire. World number one Murray will face Sam Querrey for a place in the semi-finals.

"I thought I played well. Maybe a couple of sloppy service games in the first set but that was by far the best I'd hit the ball so far in the tournament. So I'm really pleased with that," said Murray.

Only Federer and Jimmy Connors (11 each) have reached more consecutive Wimbledon quarter-finals than Murray. Murray's win meant that with Johanna Konta also making

the last-eight in the women's tournament, it is the first time since 1973 that Britain has two players in the quarter-finals. Federer reached his 50th Grand Slam quarter-final and 15th at Wimbledon with a 6-4, 6-2, 6-4 win over Grigor Dimitrov.