Sports   Tennis  14 Jul 2017  Wimbledon 2017: Andy Murray urged to sit out of US Open after struggling with hip issues
Sports, Tennis

Wimbledon 2017: Andy Murray urged to sit out of US Open after struggling with hip issues 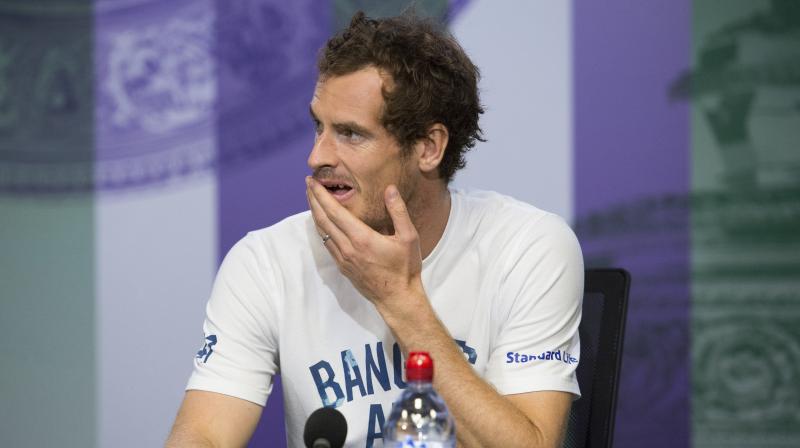 London: World number one Andy Murray, who suffered a shocking exit at the Wimbledon at Wednesday after struggling with hip issues in the latter stages of his quarter-final loss against American Sam Querrey, has been urged to miss next month's US Open, which starts August 28 if his damaged hip will stop him being a serious contender for that title.

And his brother Jamie has claimed the world number one, who has now passed the age of 30, could play a more limited schedule in future.

On Thursday, Murray saw a hip specialist to discuss treatment for his nagging hip injury.

Former British number one Greg Rusedski has insisted that Murray doesn't need to rush and all he needs is to go away and get himself healthy, even if that means missing the US Open.

"He needs to go away and get himself healthy. Don't rush it. Don't start up until he's ready - even if that means missing the US Open. Be healthy, be smart if you want to continue your career ­because for him, after everything he's accomplished, he doesn't want to be one of those guys who just turns up at Majors with no chance of winning them," mirror.co.uk quoted Rusedski as saying.

"He's the world No.1. He doesn't want to [just] take part in Majors - he wants to be ­winning them. So he needs to be sure he takes that time. Last year was a Herculean effort to get to world No.1. But you need rest and recuperation and his body just hasn't had enough of it," he added.

In 2013, Murray underwent surgery on his back to clear up a longstanding injury and was then out of the game for three months. And it is understood that he is reluctant to go under the knife again.

"It is your brother - you don't like to seeing him in pain obviously," said Jamie Murray said.

"You could tell he was not going to be able to get through the match. Even though it was sad to see him like that the last 45 minutes to an hour of the match, he did his best.

"I am sure it is cumulative. It has been a huge build-up for him over the last seven to 10 years with his training that he done and the matches he has played: the conditions he has faced and what he has put his body through," he added.

"At some point he is going to have to manage his workload. Federer has done an amazing job of that," said Jamie.

"He didn't play for like six months last year and came back in Australian playing amazing and then skipped the clay-court season. He is coming in fresh and looking forward to playing. He has got a great chance to win again. I am sure that guys, not just Andy, will probably look at that and learn from that," he added.

Asserting that age is only a number, former champion Boris Becker, however, added that Murray needs to look after his body.

"I had my struggles with certain injuries, especially with my right ankle, and I am paying a heavy price today. He has got to think long-term, not worry about making the US Open - if he is moving there like he did at Wimbledon, then he won't win it anyway," said Becker.