19-time grand slam champion Roger Federer booked a place in the last four for the 14th time in 15 appearances. 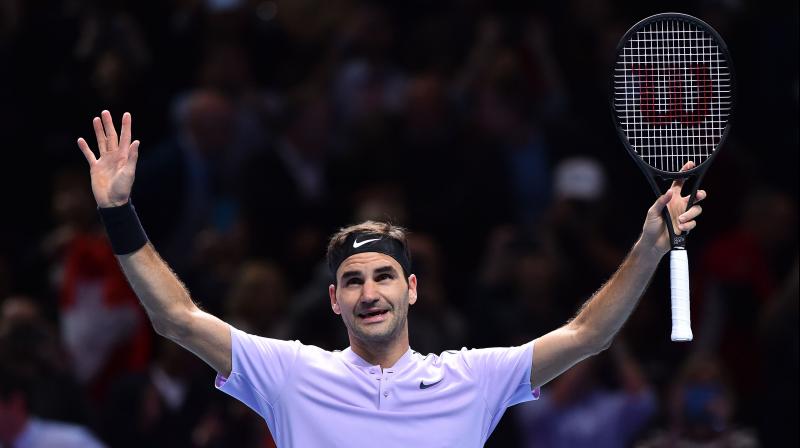 The 36-year-old six-time champion may have been giving away 16 years to the youngster fancied to be the game’s next major force but Federer proved in a dominant third set that, for the moment, he still remains a cut above his young pursuers. (Photo: AFP)

London: Roger Federer marched into the semi-finals at the ATP Finals once again on Tuesday but he made hard work of the task before finally prevailing 7-6(6) 5-7 6-1 in a high-quality battle of the generations with Germany’s Alexander Zverev.

The 36-year-old six-time champion may have been giving away 16 years to the youngster fancied to be the game’s next major force but Federer proved in a dominant third set that, for the moment, he still remains a cut above his young pursuers.

The triumph in two hours and 11 minutes ensured the 19-time grand slam champion booked a place in the last four for the 14th time in 15 appearances and with the tournament still only three days old.

It also meant that Zverev and Jack Sock will now meet on Thursday to decide the other qualifier from the Boris Becker group.

Sock earlier lived up to his childhood nickname of “Showtime” by producing a dramatic comeback triumph 5-7 6-2 7-6(4) over the erratic Marin Cilic, who is now eliminated after two straight defeats. World number two Federer looks even more of an overwhelming favourite for a seventh crown in the absence of Rafael Nadal, who has pulled out injured from the tournament.

“It sounds great,” Federer told the O2 Arena crowd after being told of his record of 14 semi-final appearances.

He had high praise for 20-year-old Zverev, too, after being tested for two fierce sets before finally dismantling the increasingly weary-looking world number three.

“I‘m very excited for his future. He’s a wonderful guy and a great, great player.”

With no classic Nadal clash on the horizon, the duel between Federer and Zverev, who had shared the spoils in their previous four meetings, was the most eagerly anticipated of the week.

It did not disappoint, with Federer immediately forced to save three break points to rescue the opening game and Zverev also digging deep to save one in the next.

Zverev’s immaculate serving kept Federer at bay despite the master testing the apprentice with the variety and mixed pace of his shotmaking.

At 6-5 down, the German saved the second of two set points in the flukiest fashion, his backhand limping off the top of the net for an outright winner. In a tight tiebreak, Federer came back from a shaky start at 4-0 down and rescued a set point of his own before cashing in on Zverev errors and testing the youngster’s patience until it cracked in a long rally.

When Federer cruised to a 2-0 lead in the second set for the loss of just a point, it seemed a quick kill was on the cards but two double faults in a poor service game saw Zverev back in the contest. Looking increasingly irritated as his first serve percentage dipped to an alarming 43 percent, the misfiring Federer was broken again at 5-6 as Zverev levelled the match.

Yet the German’s own serve, hitherto a huge weapon, also began to malfunction in the final set as Federer found a new gear. The toll of being pulled around the court by the Swiss’s variety in pace and angles began to tell on Zverev.

It evidently felt satisfying for Federer to beat one of the game’s new comets. Asked if he could remember his first ATP Finals, he smiled: “It’s so long ago I hardly remember it!”