Confident that I can compete at top level: Prajnesh 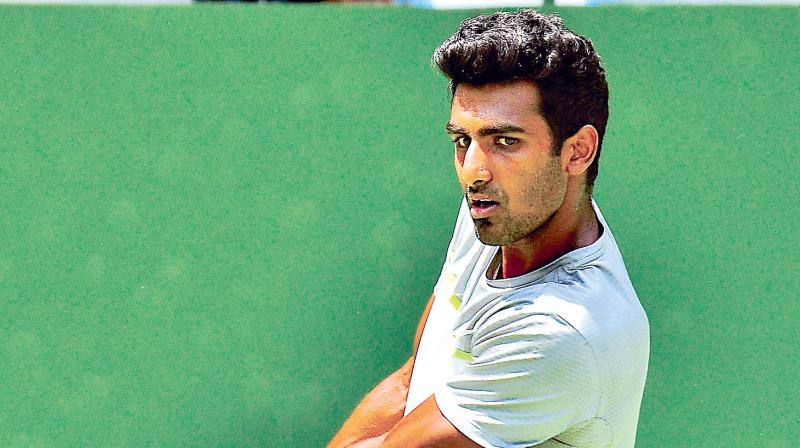 Bengaluru: Back in December, Prajnesh Gunneswaran faced Denis Istomin in the Asia-Pacific Wildcard playoff for the Australia Open. The Indian went down 6-2, 1-6, 11-9 to the Uzbek who went on to win the event and thereon to stun Novak Djokovic a month later in the first Grand Slam of the year.

As far as results go, it was a case of so near yet so far for Prajnesh. But it was one of those moments when the ball dropped for the left-hander.

It was a moment that he knew, finally, that he could belong. “I was down 4-0. I couldn’t come back into the first set because I had lost two service breaks. Once I broke back, I thought I could beat him. I started competing. The match got close. Serving 5-4 in the third, I had three match points but I couldn’t put it away. You will lose matches like this to any player but getting to that position means I am good enough to beat him,” revealed Prajnesh.

It was a validation for all the hard work and toil the left hander had put in. A nod that his decision to solider on, despite being ravaged by injury for straight seasons, was the right one.

“I wasn’t really thinking ‘am I good enough to be a tennis player or not ?’ (during the time out with injury). I didn’t know. (Playing full season in 2016) was new for me. I was happy to be competing and finding out what I am capable of. That experience is something I needed. I am older than most guys but I have played a lot less. So I have a lot of catching up to do. Maybe, I can play tennis. But playing tennis and winning a tennis match are two different things,” stressed the 27-year-old,

“It has given me confidence. I have been able to play, not get injured and beat players ranked higher. I came close to beating a lot of good players too. It gives me the belief that I am at that level or can be,” continued the Chennai-born lad who has one ITF Futures title already in his kitty this year.

Now, as fate would have it, India are set to host Uzbekistan in the second round Asia/Oceania Group-I tie here in April.

Maybe there is a Prajnesh vs Istonim part two on the cards. A match that has the potential to be more psychologically layered than others at store. Of that, time will tell, but if so, the world number 342 will come in with a lot more confidence.

“I would say (that was) a psychological boost in general. Now that I know I am good enough to play against guys like that, the next time I step on to the court, I’ll go there with belief that I can get the match close and turn it my way,” he stated adding that it would be great achievement and privilege to represent the country.

“We have very good chance to beat them. Yuki (Bhambri) is playing well right now and Ramkumar (Ramanathan) is always a fighter, so in five sets he is not easy to play against. He has a good serve as well. In doubles, we always have a chance. We definitely have a chance,” he signed off, bullish about India’s chances.