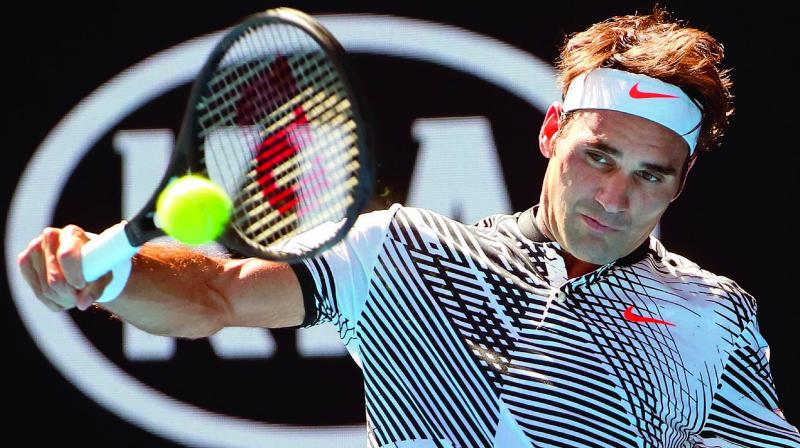 Melbourne: Roger Federer didn’t have things all his own way as he got past spirited American qualifier Noah Rubin to reach the Australian Open third round in a tough three-setter on Wednes-day. The 17-time Grand Slam champion, seeded 17, fought back from a break down in the final set to win 7-5, 6-3, 7-6 (7/3) and will next face long-time rival Tomas Berdych.

Federer, 35, had his service broken for the first time in the final set and the 200th-ranked Rubin was serving to take it into a fourth set before the Swiss legend clawed back to force a tiebreaker. His match-big experience and composure was enough to pull him through and take the match in 2hr 4min on Rod Laver Arena.

“I have played out here many, many times, that’s my advantage maybe,” Federer said of his first meeting with the American. “I did see a bit of Noah going into this match. He’s been around for a couple of years now.”

Azarenka’s baby
Victoria Azarenka’s new baby, Leo, is already learning about tennis. The 2012 and 2013 Melbourne champion tweeted a picture of the one-month-old watching Roger Federer play at the Australian Open. “Hey @rogerfederer Leo learning from the best,” Azarenka wrote. Hopefully Leo wasn’t listening too closely as, according to at least one observer, Federer let fly with some unusually strong language during his match with Noah Rubin.

Taking the cake
Angelique Kerber said she was getting used to celebrating her birthday in Melbourne as it is on January 18, the first week of the Australian Open. Kerber, who was serenaded by fans as she turned 29 on Wednesday, has contested the last 10 editions of the tournament and said her 18th birthday was the last she celebrated at home. “I celebrated my 18th birthday at home, so that was a big party. But the rest, I was always here. It’s nice,” she said.