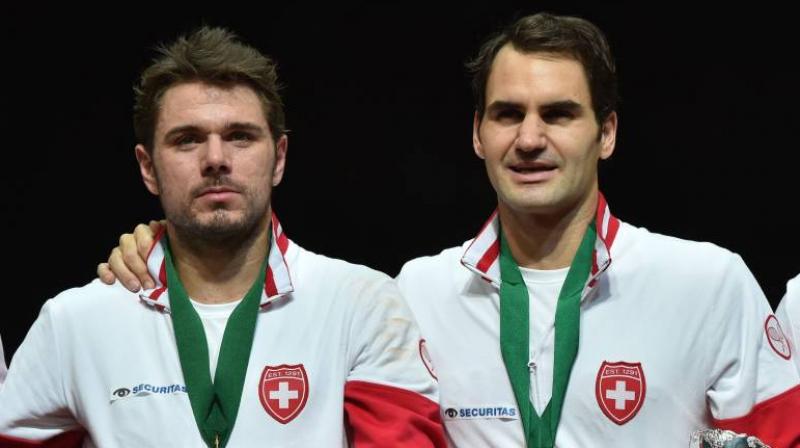 Roger Federer is poised to win his 90th career title in the final, keeping him third behind Jimmy Connors (109) and Ivan Lendl (94) for the most titles in the Open era. (Photo: AFP)

Indian Wells: Roger Federer might soon have to reset his goals for the year, seeing how well things are going for him.

Having won his record 18th Grand Slam title at the Australian Open in January, Federer will pursue a record-tying fifth BNP Paribas Open title after beating Jack Sock 6-1, 7-6 (4) Saturday to reach the final.

He takes on Stan Wawrinka in an all-Swiss title match after Wawrinka eased past Pablo Carreno Busta 6-3, 6-3.

Federer was sidelined by various injuries for much of last year, forcing him to skip Indian Wells. Heading into this year, his plan was to play as far as the Miami event next week and then see how he felt.

Now, Federer is poised to win his 90th career title in the final, keeping him third behind Jimmy Connors (109) and Ivan Lendl (94) for the most titles in the Open era.

"It's not a goal of mine per se to play until I reach 100," he said. "Could be. It's a nice goal to have. But that stuff can change. Ask me again in three to six months how I'm feeling, if I won any more or not."

Federer is 4-2 in finals at Indian Wells with his last title coming in 2012. He owns a 19-3 edge over Wawrinka, including 14-0 on hard courts, and has won their last three meetings, including in the Australian Open semifinals in January.

Despite playing on home soil, Sock was the underdog against Federer, who received loud cheers throughout the match.

"Anywhere Roger plays he's going to be the favorite," Sock said. "I don't care who he's playing and in what country."

Federer raced through the first set in 21 minutes, firing five of his eight aces in the match and breaking Sock twice.

"First one got away from me pretty quick," Sock said. "He's been doing that to players pretty consistently this year, the Rafa match and some other ones he's played."

Federer hasn't lost a set or his serve in four matches, saving one break point along the way and beating rival Rafael Nadal in the fourth round.

Sock settled down in the second set and the 24-year-old American saved his only break point in the seventh game.

"The second set was more like what I expected the first set to be before the match," Federer said. "It was hard to break and return well off Jack's heavy serve."

Federer hit a ball that came off the net and struck Sock in the neck in the 10th game.

"Didn't expect it to come off that hot," Sock said. "Usually it kind of pops up. Just something you laugh at and go to the next point."

Sock led 3-1 in the tiebreaker before Federer won six of the final seven points, closing out the victory on Sock's netted backhand.

"In the second set, I had to rely a lot on my second serve," Federer said. "I'm happy it was there because I didn't serve particularly well in that second set. Things got a bit more complicated, but it was definitely a good feeling to get through in two sets and to be back in another finals here."

Wawrinka breezed through his semi after needing third-set tiebreakers to win his previous two matches. He advanced to his first Indian Wells final, having lost in last year's semis.

He dispatched Carreno Busta while never facing a break point in the 64-minute match. The Spaniard fell to 0-3 in his career against the Swiss.

No. 21 Carreno Busta was the lowest seed to reach the semifinals at the desert tournament since 2014. It was the biggest semifinal of his career, having failed in 16 previous tries to reach that round in an ATP Masters 1000 event.

Carreno Busta beat Dusan Lajovic and No. 27 Pablo Cuevas in third-set tiebreakers to reach his third semi of the year. He saved two match points against Cuevas in the quarterfinals.

Wawrinka's serve was too much for Carreno Busta. The Swiss won 80 percent of his first-serve points and 76 percent on his second serve while taking the final four games of the match.

"So far the season has been good, even tough," Wawrinka said. "I had an injury (knee), and I had to take some time off and do some hard work at home to get back fit and ready."