Osaka went on to reach the third round of the US Open after stunning Kerber. 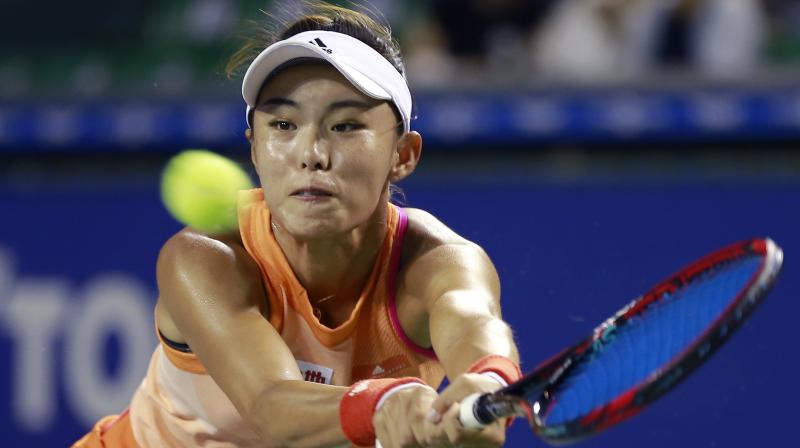 Wang Qiang of China returns a shot to Kristina Mladenovic of France during their first round match of the Pan Pacific Open tennis tournament in Tokyo, Monday. (Photo: AP)

Tokyo: Former world number one Angelique Kerber thrashed Japan’s Naomi Osaka 6-3, 6-4 at the Pan Pacific Open women’s tennis tournament on Monday to avenge a humiliating loss at the US Open.

Frenchwoman Kristina Mladenovic suffered an epic Tokyo meltdown, meanwhile, as she was pulverised by China’s Wang Qiang, who inflicted the dreaded “double bagel” on the eighth seed to win 6-0, 6-0 and reach the second round.

Kerber, seeded seventh, crashed to a shock 6-3, 6-1 first-round defeat by Osaka in New York last month as defending champion but a repeat never looked like happening as the German quickly took control.

Kerber, who has slipped back to 14th in the world since winning last year’s Australian and US Open titles, ripped forehands past her teenage opponent seemingly at will in the first set.

Osaka’s game unravelled completely in the second, allowing Kerber a welcome opportunity to work her way back to form after a poor run of results and seal victory in an hour and 23 minutes. Osaka went on to reach the third round of the US Open after stunning Kerber.

But the world number 44 almost appeared to be tanking at times at the venue for the 2020 Tokyo Olympics, such was her lack of gusto, and committed 38 unforced errors in a performance she will want to forget in a hurry.