'We welcome them to join the political discussions': Djokovic on Kermode ouster

Nadal stressed the decision to make a change at the top of the ATP was so big that everyone should have been consulted. 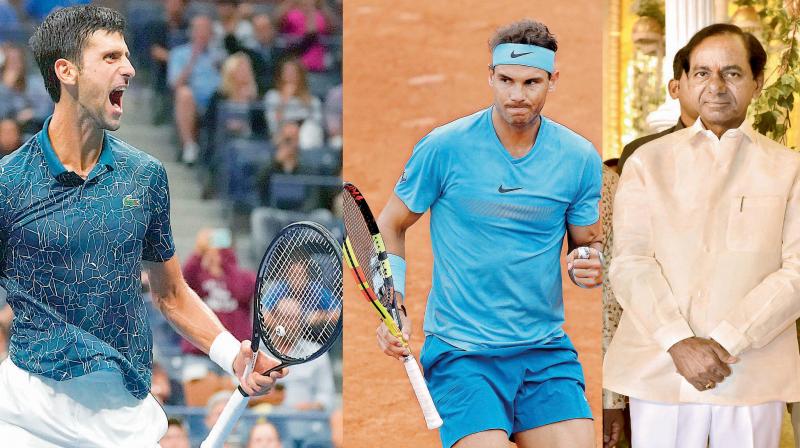 Djokovic, however, maintains he would welcome the input of the Swiss and Spanish legends. (Photo: File)

Miami: Novak Djokovic played down a reported rift with Roger Federer and Rafael Nadal, saying he welcomed their views on the controversial ousting of ATP Chairman Chris Kermode.

Federer and Nadal ripped top-ranked Djokovic, current president of the ATP Player Council, for failing to contact them over the decision to terminate Englishman Kermode, whose reign began in 2014 and concludes at year's end after a vote at Indian Wells earlier this month.

Serbian star Djokovic vociferously pushed for change despite many within the game strongly advocating for Kermode to remain in charge.

Federer said Wednesday he was not "chasing" Djokovic for an explanation despite claiming at Indian Wells it was "hard to understand" why Djokovic turned down a request to discuss the situation.

Djokovic, however, maintains he would welcome the input of the Swiss and Spanish legends.

"We welcome them as well as anyone else who wants to join the political discussions," Djokovic said ahead of the ATP Miami Open, where he is due to begin play on Friday.

"The player council is only part of the structure. We are not part of the board or deciding anything. We are in consultation and collaboration with player board representatives.

"Federer and Nadal have been icons of our sport for so many years and their opinions are extremely important to everyone. If they want to be active and part of it, either officially or unofficially, I think it's only positive for us.

"I saw Roger today. We were cutting the ribbon at the opening of the center court. We had a small chat but there was no time to talk about the political stuff. Hopefully we will have time in the next few days to go through some things."

Nadal stressed the decision to make a change at the top of the ATP was so big that everyone should have been consulted, raising the chance of a major fall-out between the three stars.

"I have not noticed anything from their side or from mine," Djokovic said.

"It's not necessary for people to create any tensions or divisions between us. On the contrary, I have a good relationship with both of them. We always respected each other. We are rivals of course so it's hard to be friends.

"We need an open dialogue and for people to have different opinions. That's what a democratic society is. We all try and be part of that." Djokovic said many players were frustrated at the current system.

"It's frustrating for me personally and other players who have been part of the structure because it has failed us many times," he said.

"And many times when top players wanted to be involved and be heard they felt like everything they have said was not really followed through in a way it was supposed to be."

Political conversations will continue over the next few months as Kermode's successor is found, but for now Djokovic, who suffered an early exit in California, will aim to transfer his energy into landing a seventh Miami title.

Djokovic, 31, enjoyed a stellar 2018, winning Wimbledon and the US Open before taking his major tally to 15 by reigning in Australia at the start of 2019.

"I haven't had too many single matches as I lost early in Indian Wells," Djokovic said.

"But Miami is a special place for me because I won my first big title here. That opened a lot of doors for me."

Federer, meanwhile, is chasing his 101st career title after narrowly losing to Austrian Dominic Thiem in the Indian Wells final last weekend. At 37, the Swiss is firmly in the twilight of his amazing career but has no intention to hang up his racket just yet.

"I'm happy to be at 100 titles. It's exciting to have won that many," said Federer, who debuts Saturday.

"It was a pity I couldn't get to 101 last week but I will keep plugging away and hopefully give myself more opportunities. The most important thing is to be healthy and happy playing and that's exactly how I feel."