Nadal knows all too well how that feels. He has missed six Grand Slam events in the 13 years since he began winning such titles. 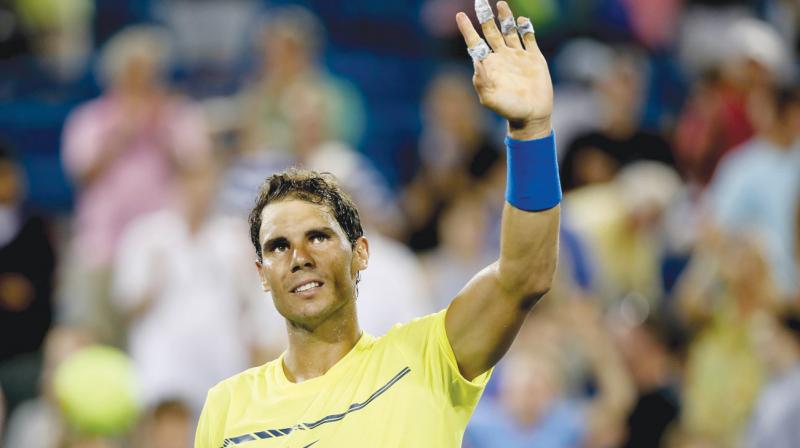 Rafael Nadal will overtake Andy Murray as world no. 1 in the latest ATP rankings, to be released on Monday.

Cincinnati: Once and future world number one Rafael Nadal has some advice for men’s tennis stars in danger of missing the US Open due to injury — accept it and keep going.

The 31-year-old Spaniard defeated France’s Richard Gasquet 6-3, 6-4 on Wednesday to reach the third round at the ATP Cincinnati Masters, the last major US Open tuneup with the year’s last major starting August 28 in New York.

Nadal, a 15-time Grand Slam winner nagged by knee injuries for years, will overtake Andy Murray atop the rankings on Monday, the British star being sidelined by a hip injury.

Nadal was assured the top spot for the first time since July 2014 when 19-time Grand Slam winner Roger Federer withdrew from Cincinnati with a back injury.

“I worked a lot to give me another chance and here I am,” Nadal said.

“Just to be back to that position makes me happy and of course is going to be an emotional moment for me.”

Serbian 12-time Grand Slam champion Novak Djokovic will miss the remainder of the year with an elbow injury while and Swiss 2016 US Open champion Stan Wawrinka is out with a knee injury and Kei Nishikori will miss the rest of 2017 with a torn right wrist tendon.

Add Marin Cilic out with an adductor injury and Milos Raonic withdrawing with a left wrist injury and seven of the world’s top 10 are absent this week.

Nadal knows all too well how that feels. He has missed six Grand Slam events in the 13 years since he began winning such titles.

“I have been in that position more than all these players that are out now,” Nadal said. “I know how tough it is. I am very sorry for all of them and I wish all of them a fast and good recovery.

“But at the same time I tell you Roger didn’t have a lot of these things during his career. Novak the same. Andy the same. Stan, I don’t think he had a lot of issues.

“I’m the only one of these top players that missed a lot of important tournaments in my career. More than nobody else, I know how tough it is.

“But the only thing that you can do when these kind of things happen is accept and keep going.”

‘We’re not 20 anymore’
Nadal dismisses the notion that the season has become too long and grueling. “The season didn’t change for the last 20 years, so we cannot think about that now,” Nadal said. Is something that happens because we’re not 20 years old anymore. We’re over 30, most of us, so it’s something that can happen.”

Nadal says it has been special having Federer turning back the clock, winning the Australian Open and Wimbledon, at the same time he is doing the same, winning the French Open and proving doubters wrong.

“It’s something that probably is special because a lot of people thought that we will not be able to be back to where we are now,” Nadal said. “But we’ve been in that position for a lot of years. Is special, yes, but is nothing new.”

Nadal had not won a major crown since 2014 at Roland Garros until he hoisted the trophy once again on Paris clay in June. And Federer, 36, went more than four years from Wimbledon 2012 to Melbourne this year without a Slam title.

“I do my way and Roger did his way,” Nadal said. “Everybody is different. I always say the same. I am going to keep playing while what I’m doing makes me happy. I’m a very lucky man that I can choose when I want to stop.

“If I’m happy and especially if I’m healthy, I keep going because I love this sport. I love the competition. When I arrive at the days I lose one of these things, I’m going to do nothing.”