Nagal, who is currently ranked 130 in the ATP rankings, is presently training at IIT-Madras premises here ahead of the 2020 season. 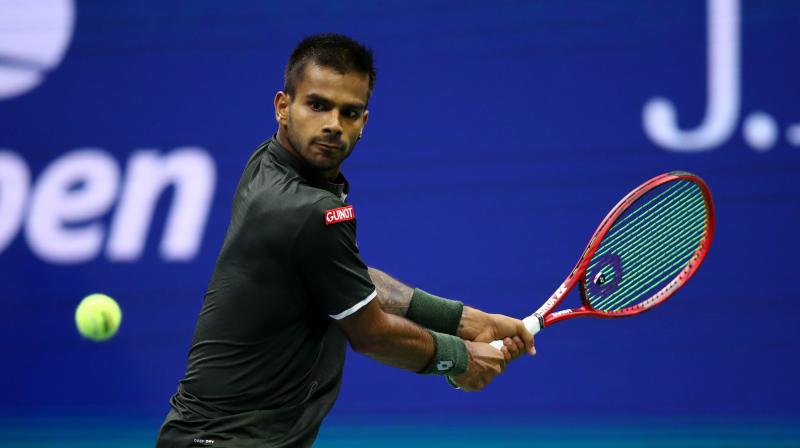 Indian tennis player Sumit Nagal on Friday said he was aiming to break into the top 100 of the ATP rankings and then look at being in the 80s in the quest for an Olympics spot. (Photo: AFP)

Chennai: Indian tennis player Sumit Nagal on Friday said he was aiming to break into the top 100 of the ATP rankings and then look at being in the 80s in the quest for an Olympics spot.

"Like I said first it is the top 100 then look for the top 80 and look for the Olympics spot. I think it is around 80-85 to make it to the Olympics," he told reporters here on the sidelines of an event organised by Aspire High Performance Tennis Programme.

Nagal, who is currently ranked 130 in the ATP rankings, after having a good season during which he qualified for the US Open main draw and also took a set off the legendary Roger Federer, is presently training at the Aspire Foundation centre at IIT-Madras premises here ahead of the 2020 season.

The Indian made it to the semi-final or better of eight ATP Challengers this year, going through to the finals twice and winning the title in Buenos Aires.

He had wins over former world no 17 Albert Ramos-Vinolas and former world no 24 Martin Klizan and made it to the main draw of an ATP 500 (at Hamburg) for the first time in his career.

Asked what Federer had told him after the match in New York, the 22-year-old Nagal said he (Federer) didn't say much but did say nice things (about him) in the media.

"That day he didn't say much. He wished me the best. I heard him he said nice things about me in the media," he added.

After a good year during which he jumped to 130 after being ranked 340 at the end of 2018, Nagal said the biggest factor this season was staying injury-free and having new issues with his body.

"The biggest factor this season was staying injury-free. In my last 4-5 years, every year I have played seven to eight months. For the first time in the last five years, I had played without getting injured. I tore my ankle in the summer. Other than that body has been fine. No new injuries or no big issues with my body," he added. Nagal said he would look to play more ATP Tour events this year but for that, he would have to first improve his rankings.

"I think mostly the aim is to play the ATP Tour this year. I want to improve my ranking. I am still in a spot where I will mostly be in the qualifiers of the ATP 250 events, so the focus is to improve my ranking," he added. Asked what was the reason behind his training in Chennai, the reason was the sultry conditions which are pretty similar to Melbourne in January where he would play Australian Open qualifiers.

"It is because it is halfway to Australia. Plus the weather is nice and warm .. something we are looking at before Melbourne.."