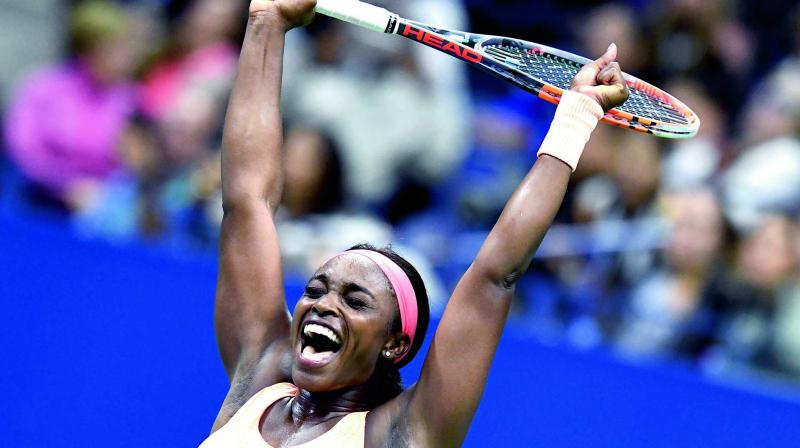 Jakupovic was serving for the first set and Williams was on the back foot before the qualifier wilted under the pressure and 43rd-ranked Williams booked a second-round matchup against Spanish 24th seed Carla Suarez Navarro. (Photo: AFP)

Miami: Venus Williams displayed the mental strength that has made her a seven-time Grand Slam singles champion on Thursday, holding off a spirited challenge by Slovenian Dalila Jakupovic at the WTA Miami Open.

The 38-year-old American, a quarter-finalist at Indian Wells last week, turned back Jakupovic 7-5, 6-3 in 78 minutes to reach

Jakupovic was serving for the first set and Williams was on the back foot before the qualifier wilted under the pressure and 43rd-ranked Williams booked a second-round matchup against Spanish 24th seed Carla Suarez Navarro.

after a rough start. Jakupovic was serving for the first set and Williams was on the back foot before the qualifier wilted under the pressure and 43rd-ranked Williams booked a second-round matchup against Spanish 24th seed Carla Suarez Navarro.

Tenth seed Serena Williams, a 23-time Grand Slam singles champion and younger sister of Venus, will open in the second round against Sweden's Rebecca Peterson, who eliminated German qualifier Laura Siegemund 6-1, 5-7, 7-5. Venus credits her mother, Oracene Price, with instilling the character and desire to match the tennis skills developed by their father and long-time coach Richard Williams.

"Growing up in my home, we weren't allowed to be weak, so it just wasn't an option," Venus Williams said. "The only option was to be strong. You had a choice of being strong or being strong, so we were strong." Williams, a three time Miami Open champion, is the oldest player in the women's singles draw but has no problem striving for more titles. "I don't think there is really any sacrifices," she said. "I think it's really only pluses, especially if you're able to execute on your dream. That's really what anyone and everyone wants.

"One of the challenges is that it's really a lifestyle and there is never any moment where you're not trying to get better or that you forget about tennis. "You just feel intense pressure to get better and to work." Three consecutive breaks saw 80th-ranked Jakupovic ease into an early 3-2 lead with Williams struggling on serve, and she served for the first set at 5-4 before Williams answered to claim a set that saw seven service breaks in all.

Williams stormed ahead 5-1 in the second set and cruised from there. Williams, in a record 20th Miami appearance, knows she faces a tougher test in Suarez Navarro even though she owns a 6-3 career edge on the Spaniard. "She's crafty, feisty, and competitive," Williams said. "She plays maybe a little more topspin than others and then some slice. So it's a little bit atypical game." Mari Osaka, the older sister of world number one Naomi Osaka, was ousted in her opening match, falling to American Whitney Osuigwe 6-2, 6-4.