“It was by far my best match of the week After my long break, I’m feeling excellent and it’s a pleasure to be back and I’m fit for Wimbledon.” 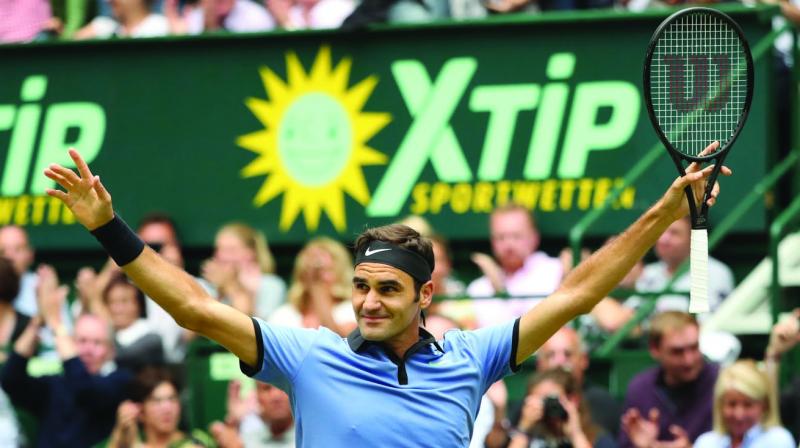 Roger Federer celebrates his victory in the final of the Gerry Weber Open against Germany’s Alexander Zverev in Halle on Sunday. (Photo: AP)

Halle: Swiss great Roger Federer thrashed Alexander Zverev to win his ninth Halle title on Sunday and admitted he’s feeling fresh ahead of his assault on an eighth Wimbledon crown next month.

The top seed lost his first match of the grass-court season last week in Stuttgart to Tommy Haas, but was in imperious form all week at Halle, culminating in Sunday’s 6-1, 6-3 final victory over home favourite Zverev.

Federer will head into Wimbledon, which starts on July 3, as favourite to win an outright record eighth title and surpass the mark of seven he currently shares with Pete Sampras.

“I was doubting myself a little bit, I must admit, because losing in the opening round for the first time in 15 years on grass was always going to shake me a little bit and it did,” admitted Federer.

“So I’m happy to react right away and let that be forgotten and actually move on and remind myself I actually can play well on grass. “It’s a boost for me personally, with my confidence, knowing that my body is in good shape. Mentally, I’m fresh again and I’ve gotten used to match play.”

Rome Masters champion Zverev, 20, had won all three of his previous finals this season, but was blown away by a vintage performance from 18-time major champion Federer in only 53 minutes on Sunday.

“It was by far my best match of the week. After my long break, I’m feeling excellent and it’s a pleasure to be back and I’m fit for Wimbledon.”

The 35-year-old, who skipped the entire clay-court season, has still only lost two matches this year en route to four titles, including the Australian Open in January.

“My goal was to keep myself 100 percent for the grass season,” he added.

“I’m like on ‘Cloud Nine’ right now after the ninth win here in Halle. It’s a wonderful feeling to win here again because I’m not sure if I’ll ever get a chance to win this again so it’s important to enjoy it,” said Federer after wrapping up his 92nd ATP Tour title of his career, which moves him to within two of second-placed Ivan Lendl on the all-time list.

Still able to
fight: Kvitova
Birmingham: Petra Kvitova said that coming back from a set down to win her first title since suffering a career-threatening injury on Sunday has given her added confidence ahead of Wimbledon starting next Monday.

The Czech beat Australian Ashleigh Barty 4-6, 6-3, 6-2 in the final of the grass-court event in Birmingham.

It was just the two-time Wimbledon champion’s second tournament since recovering from severe injuries to her left playing hand suffered while fighting off a knife-wielding burglar at her home in December.

“I think it was nice to lose the first set, and that I had to fight for the second and for the third,” said Kvitova. “I think that will give me some extra confidence that I am still able to fight. So I think that’s important.

The 27-year-old will head into the third Grand Slam tournament of the season as one of the favourites for the title, with reigning champion Serena Williams taking time out from the sport to give birth to her first child, and last year’s runner-up Angelique Kerber having a difficult season.

Kvitova lifted the Wimbledon trophy in 2011 and 2014, but she insisted that despite Sunday’s success, she is not yet back to her best form. Kvitova, who was supposed to play next in Eastbourne pulled out of the Wimbledon warm-up event with an abdominal injury, the WTA reported on Monday.