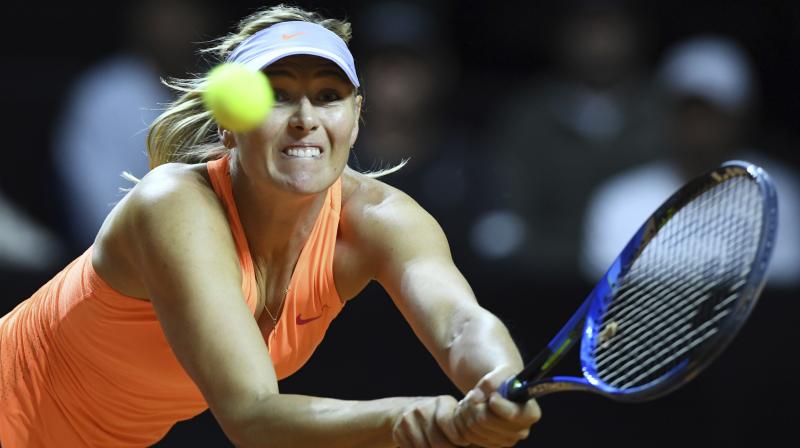 Maria Sharapova has yet to drop a set in Stuttgart. (Photo: AP)

Stuttgart: Maria Sharapova eased into the semi-finals of Stuttgart's WTA tournament after seeing off qualifier Anett Kontaveit on Friday for her third-straight win on her comeback after a 15-month doping ban.

The 30-year-old five-time Grand Slam winner has yet to drop a set in Stuttgart and powered past Estonia's Kontaveit, ranked 73rd, for a 6-3, 6-4 quarter-final win in one hour, 23 minutes.

This was another impressive display from the Russian, who hit four aces, 28 winners and just two double faults, while she converted five of her six break points.

"I served quite well and held my serve which gave me confidence, so I'm happy," said Sharapova.

"We haven't played each other before, so the first six games were just about working each other out.

"I kept myself in good shape, because once you lose it, it's hard to get it back," she added when asked about her fitness on court after 15 months out.

The former world number one will now play either France's Kristina Mladenovic or Spain's Carla Suarez Navarro in Saturday's semi-final.

Sharapova only made the main draw for Stuttgart after being given a wild card as her ranking was wiped out after testing positive for meldonium at the 2016 Australian Open.

Her rivals have heavily criticised the decision to give her wild cards in Stuttgart, Madrid and Rome with Canada's Eugenie Bouchard branding her a "cheater" on Thursday.

There has been nothing but support for the Russian from the Stuttgart crowd with a few positive banners around the indoor arena.

She has been in commanding form on clay here as Sharapova waits to learn on May 16 whether she will be granted a wild card to play next month's French Open.

The 21-year-old Kontaveit had already knocked out last year's French Open champion and fifth seed Garbine Muguruza in the second-round.

The Estonian put up a fight, breaking Sharapova's serve in the second set and matched the Russian's tally of four aces.

But Sharapova made light work of her early on, breaking Kontaveit's serve on the way to winning all of the last four games to take the first set in just 36 minutes.

The Estonian dug deep at 3-1 down in the second and had the audacity to break Sharapova in the fifth game.

But with her superb array of baseline shots, Sharapova broke her opponent straight away, then held her serve to go 5 -2 up.

The plucky Kontaveit held her serve, then broke the Russian for the second time, but Sharapova also dug deep and broke the qualifier again to take the second set.

Her bid to reach a fourth final on Sunday has been made easier as top names, such as Angelique Kerber, Muguruza, Britain's Johanna Konta and Agnieszka Radwanska, have all crashed out.

Only two of the seven top-ten players who started here – second-seed Czech Karolina Pliskova and fourth-seeded Romanian Simona Halep – have survived to the quarterfinals.