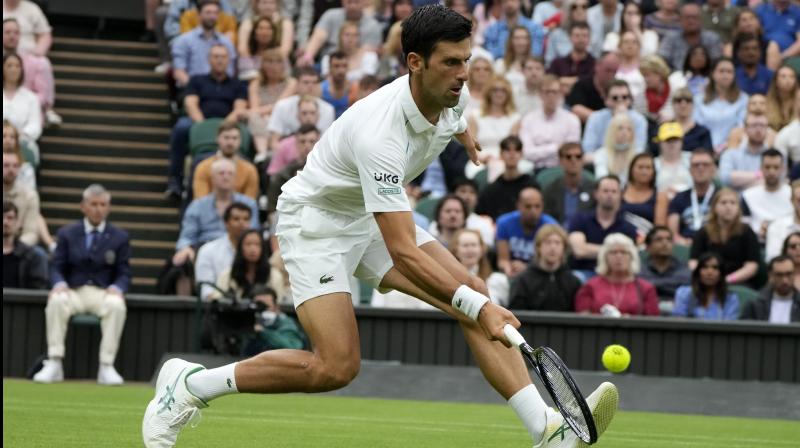 Serbia's Novak Djokovic reacts after losing a point to Britain's Jack Draper during the men's singles match of the Wimbledon in London on Monday. (Photo: AP)

London: Novak Djokovic overcame an early scare before getting his bid for a sixth Wimbledon and record-equalling 20th Grand Slam title off to a winning start on Monday while rain brought havoc to the schedule, one year after the tournament was cancelled due to the Covid-19 pandemic.

Defending champion and world number one Djokovic, looking to become just the third man in history to complete a calendar Grand Slam, claimed a 4-6, 6-1, 6-2, 6-2 win over Britain's 253rd-ranked Jack Draper.

However, the 34-year-old Serb struggled on the slippery Centre Court surface with the roof closed above it due to the rain.

Left-handed Draper, playing just his fifth match on the main tour, saved seven of seven break points in the opener to stun the top seed.

But Djokovic soon snuffed out any danger of him becoming only the third defending champion to lose in the first round, by sweeping through the remainder of the tie.

He finished with an impressive 25 aces and 47 winners as his 19-year-old opponent, who grew up just six miles (9.5km) from the All England Club, wilted.

"He's a youngster and I hadn't seen him play too much prior to Queen's and he played pretty well, won matches against high-ranked players," said Djokovic.

Next up for Djokovic will be either former runner-up Kevin Anderson or Chilean qualifier Marcelo Tomas Barrios Vera.

It was the 34-year-old Djokovic's first match on the court since his epic five-set win over Roger Federer in the 2019 final, the longest title match in tournament history and where he saved two championship points.

His match on Monday was preceded by a standing ovation for Professor Sarah Gilbert, one of the key scientists behind the Oxford Asra-Zeneca Covid-19 vaccine who was a special guest in the Royal Box.

Wimbledon looks very different with Covid-19 protocols in place and a 50% capacity until finals day, but one familiar feature was the summer rain.

Play on the outside courts started five hours late with 16 of the day's scheduled 64 matches cancelled until Tuesday.

Belarus second seed Aryna Sabalenka had the honour of being the first winner at the tournament in two years when she downed Romanian qualifier Monica Niculescu 6-1, 6-4 under the roof of Court One.

Elsewhere on Monday, Greece's Stefanos Tsitsipas, promoted to third seed in the absence of Rafael Nadal, has a tough opener against 57th-ranked Frances Tiafoe of the United States.

Tiafoe won a second-tier grass court Challenger event in Nottingham this month before making the quarter-finals at Queen's Club.

Tsitsipas, who lost a five-set final to Djokovic at the French Open two weeks ago, made the last 16 at Wimbledon in 2018.

However, he was a first-round loser two years ago and comes into Wimbledon with just 15 matches on grass in his career.

Two-time champion Andy Murray is on Centre Court against Georgia's Nikoloz Basilashvili, a semi-finalist in Halle.

Murray, now ranked at 118, is playing his first singles match at Wimbledon since 2017 after a lengthy battle with hip and groin injuries.

Petra Kvitova, the 2011 and 2014 champion, starts against former US Open winner Sloane Stephens.

Players are confined to a hotel 'bubble' in central London this year.

However, there have already been two virus-related withdrawals.

Britain's Johanna Konta was identified as a close contact of a positive coronavirus case and will have to self-isolate.

The world number 31, a semi-finalist at the tournament in 2017, had been drawn to face Katerina Siniakova of the Czech Republic.

The 30-year-old's place will be taken by 123rd-ranked lucky loser Wang Yafan of China.

On Saturday, former men's doubles champion Frederik Nielsen was forced to withdraw after also being identified as a close contact.

"This is not unexpected," said All England Club chief executive Sally Bolton.

"It's terribly sad for the players but it's something we plan for. We have protocols in place."