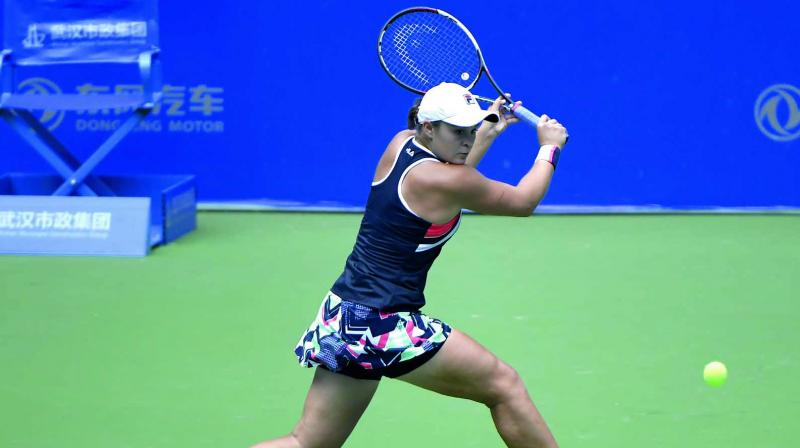 Australia’s Ashleigh Barty returns to Karolina Pliskova of the Czech Repubic in their women’s singles quarter-final of the WTA Wuhan Open tennis tournament in China on Thursday. (Photo: AFP)

Wuhan: Australia’s Ashleigh Barty pulled off a major upset against former world number one Karolina Pliskova in the quarter-finals of the Wuhan Open on Thursday, downing the number three seed 4-6, 7-6 (7/3), 7-6 (7/2).

Barty, ranked 37th in the world, failed to convert three match points in the third set but dominated the deciding tiebreak to bag her first ever win against a top-five player.

The 21-year-old Barty had already seen off Agnieszka Radwanska, seeded nine, and Johanna Konta, the fifth seed in a dream run in the humid Chinese city. “I played a really good match and I’m just happy to come through at the end,” she said.

“It was really important for me to look after my service games and obviously try and make inroads into Karolina’s games and I was able to do that,” Barty added. After Pliskova’s exit, there are now just three seeds remaining in the competition.

The Czech, who is the world number four but who spent eight weeks at number one this year, had looked strong in the earlier rounds as she breezed past China’s Zhang Shuai and Wang Qiang.

Barty will face either world number one Garbine Muguruza or Jelena Ostapenko, seeded eight, in the semifinals. In another match, Caroline Garcia beat Ekaterina Makarova 7-6 (7/3), 6-4.