Target is to compete for the whole season: Saketh Myneni

2016 being his best year on circuit as well as making his singles debut in Davis Cup, Saketh Myneni is keen to take his game to next level. 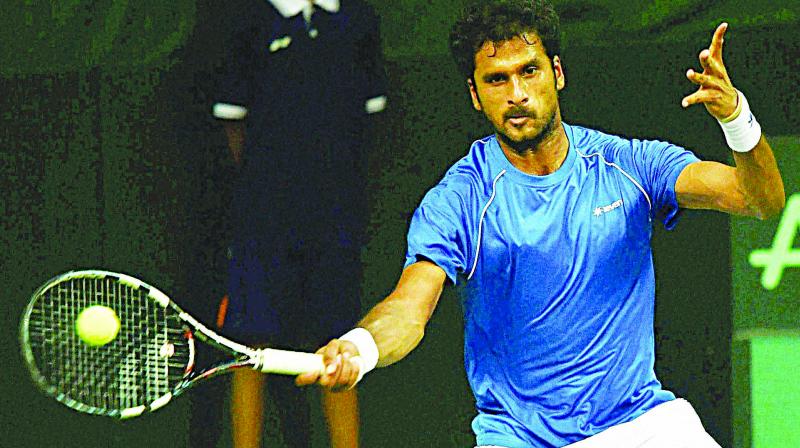 Bengaluru: Like multitudes of young men heading into college, Saketh Myneni too had a dream, admittedly, of a unique taste. The aim was always to represent the country. Tennis was his main focus throughout his time at the University of Alabama and in 2012, Myneni turned pro.

“For me, when I left India for college, my dream, which has always been the same, was to play for the country.  For that, I needed to do certain things. Start from scratch, be on tour and especially Davis Cup. “I felt college will help me get better and then I can come back, get stronger. “That was why I went to college and made sure I learned as much as I can, the infrastructure they have over there and the promotion towards the sport I felt will help me,” reveals Myneni in an interview.

Two years on his wish was fulfilled as he made his first appearance for India in the Davis Cup doubles tie against Chinese Taipei. While certainly a tick in the ‘done’ column, it will be the 2016 Davis Cup matches that the Vizag-born star will remember with more gravitas. The 29-year-old made his singles debut in the Davis Cup while cementing his place as the top-ranked Indian player. But for the strapping 6’4” Myneni, it’s all about being part of the team.

“Whatever contribution I can do, I enjoy it. Whether it is singles, double or even as water boy. I love it and take pride in doing that for the country. If I have to play one, two or three days, I’m ready. I just want to play for my country,” he stressed. With appearances in the qualifying round of all four Grand Slams, making it to the US Open main draw, reaching a career high ranking of 137, it could have been more if not for the niggles which curtailed his season early.

“I had niggles from May. I played with it because it’s the middle of the season and you don’t get enough time until the end of the year to get some time away from tennis. I took a few months off to rest my shoulder,” he explained. Still, there is little doubt that the lanky athlete will be key to India’s plans going forward, especially, if he is to build on his impressive 2016.

“It was one of the best years, playing all four Grand Slams, it’s a first time for me, and qualifying in one and losing in the final qualifying in another. “We had some good games in Davis Cup as well. it’s been a successful year in that way. I’ve been getting better and better but long way to go still, in terms of where I want to be,” he said. “The first target (going into the new season) is to be healthy and compete through the whole season. The next one is to compete in all four Grand Slams and move up the ranking. Break into the top 100 and try and stay there,” added the Zeven athlete.

Myneni, currently ranked 192, will start the new season at the Chennai Open where he has been granted a wildcard. “I won my first futures there back in 2011 when I just got back from college. Hopefully, I can justify the wild card and have a good run,” he signed off.

‘It’s about staying fit & the right schedule’
As one of the top singles players from India currently in the Tour, Saketh Myneni realises fitness is one of the key factors in the sport. While it has been a great experience, it’s not been without challenges.“The amount of physicality that has changed is huge in the last four-five years compared to the previous 10 years. It’s about staying fit and lasting the whole season.

“It’s tough when you have injuries and such to stay in the top 100 and perform,” Myneni said.“It’s very tough and a lot of work. You need a good team and the right schedule. Planning and time management, where to play and what tournaments to play, training you put in. “The main thing is to know your own body and know how much they need to do to get to the next level.” The big serving Myneni also left no illusions for the aspiring players stating that the beginning will be a slog.

“You travel a lot. Especially in the beginning you travel alone, in the Futures and all, it’s pretty lonely. Initial stages, definitely the days are very long,” he revealed. “That’s the motivation as well, isn’t it? If you want to be in the big level, then you have to be motivated enough to move up this level. Tour events are the big level and that’s where everyone wants to step into.  The loneliness could be only the first phase of tennis, you have to look at the light at the end of the tunnel.”

‘Kiwi tie will be tough challenge’
With India set to kick-start their attempt to make it to the Davis Cup World Group against New Zealand in February, India’s top singles star Saketh Myneni says there is no shortage of talent. Having lost out in the World Group playoffs three years in a row, the 29-year-old feels a strong start could well prove to be the difference.

“Definitely, we have good players here. It’s about putting it together on those three days. The singles is more important because its four points of the five. “Doubles is important going into the third day. The thing is if we get two wins in the first two days against quality players, that will really boost our chances to enter the world group. Hopefully we get to do it this year,” he remarked.

Having defeated the Kiwis laboriously last year in New Zealand, Myneni is confident of a stronger performance at home. “New Zealand is great team. It’s going to be a tough challenge. It will be nice for us to be at home. The support and conditions will be more suited for us. We can hopefully take advantage of that and win it in the first two days to gain some confidence going into the next round,” he stated.