Maria Sharapova will learn on May 16 whether she will be given a wild card for the main draw at Roland Garros. 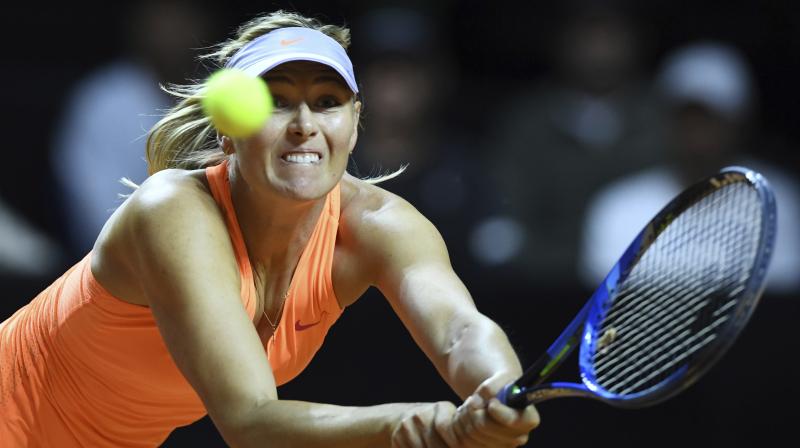 Maria Sharapova refused to blame a lack of fitness for her defeat, but says she needs match practise after her enforced break. (Photo: AP)

Stuttgart: Maria Sharapova lost in the semi-finals in Stuttgart on Saturday, her controversial comeback from a 15-month doping ban ending in defeat to one of her biggest critics.

Sharapova, a five-time Grand Slam winner and former world number one, lost 3-6, 7-5, 6-4 to Kristina Mladenovic as the Russian exited her first tournament back from a ban after testing positive for meldonium at the 2016 Australian Open.

"I'm not angry, I'd have loved to have used the opportunity when I was ahead in the second set, so I had a bit of a let down which allowed her to get back in the match, gain confidence and play well," said Sharapova.

Mladenovic has been a vocal critic of Sharapova's return to tennis and on the eve of their semi accused her of getting "extra help", having been handed wild cards to play at the Stuttgart, Madrid and Rome tournaments.

Having started her comeback with a world ranking of zero on Wednesday, due to her ban, reaching the semi-final means Sharapova has already moved up to 260th in the world.

Sharapova refused to blame a lack of fitness for her defeat, but says she needs match practise after her enforced break.

"If at the start of the week I'd said I'd be in this position, I'd be pretty happy with that," she said.

"The way I played, I was really happy with that. You are never sure what level you are going to come onto the court with, but I feel this is a great base with which I started here."

Sharapova will learn on May 16 whether she will be given a wild card for the main draw at Roland Garros and Mladenovic was complimentary of the Russian after her semi-final victory.

"She's a tough player and was very aggressive from the first ball," said Mladenovic after their titanic duel over two hours, 38 minutes.

"I was struggling early on, but just stuck in there and fought, so I am very happy that it paid off."

Sharapova made light work of Mladenovic in the first set, which lasted just 35 minutes.

But Mladenovic, ranked 19th in the world, rallied superbly at 2-0 down in the second, holding her serve and breaking Sharapova in what turned into a battle of nerves.

Mladenovic showed the first signs of cracking when what should have been a simple return spiralled harmlessly off her racquet as she served with the advantage at 5-5.

But she held her composure and went 6-5 ahead, having defended three break points, as her superbly weighted drop shot wrong-footed Sharapova.

The French player then took the second set, which lasted 64 minutes, breaking Sharapova by converting her first set point.

The deciding set followed serve until 3-3, but Sharapova had to hold her nerve, defending a break point at 40-30 down in the fourth game with a ferociously hit ace and a fist pump.

Mladenovic seized the advantage by converting her fourth break point and then came from 40-0 down in the seventh game to take a commanding 5-2 lead.

Sharapova rallied to pull it back to 5-4, but Mladenovic was not to be denied her first win over the Russian and converted her first match point.