With the latest ASUS VivoBook 14, you finally get a laptop that offers 24-hours battery life which is crucial in our fast-paced lifestyle. 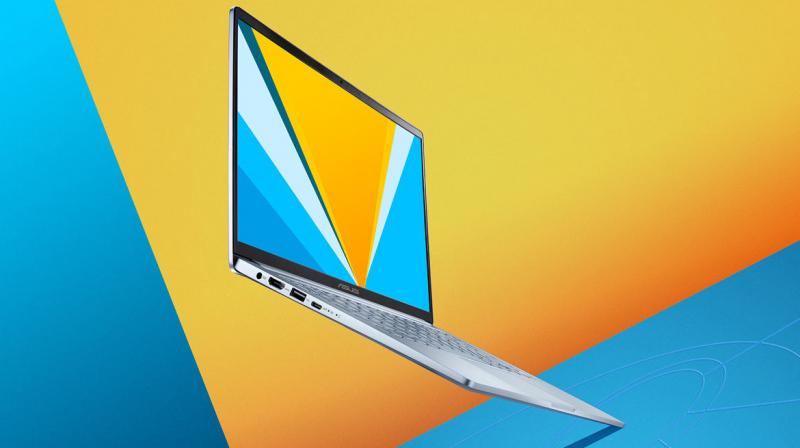 Available in a Silver Blue colourway, this laptop exudes professionalism that can also fit in in a casual environment like say, for example a coffee shop.
Rating:

In 2019, the entire dynamic of the tech industry is changing with several brands adding higher capacity batteries in their devices. Where smartphones are concerned, witnessing handsets with 5000mAh batteries across various price points are soon becoming the standard. With these high-end batteries, devices are easily lasting a couple of days without any issues.

When it comes to laptops, having a massive 24-hour battery is virtually unheard of. There are brands which offer you a 17-hour battery life but you will end up paying through your nose for it. ASUS has recently launched the VivoBook 14 (X403) with a claimed battery life of 24-hours. This budget-friendly laptop is designed for those who are constantly on the move and it features a small footprint that’s easy to tote around and all the while being extremely portable due to its lightweight nature.

If you are someone who frequently travels long distances or in and around the city, this is the laptop you should be looking at as it does not just come with a massive 72Wh battery that offers you a 24-hour battery life; but is also built to withstand impacts as it features military-grade reliability that exceeds the exhaustive MIL-STD-810G durability standard.

So, if you fit the bill, then read on to know more about the latest ASUS VivoBook 14. 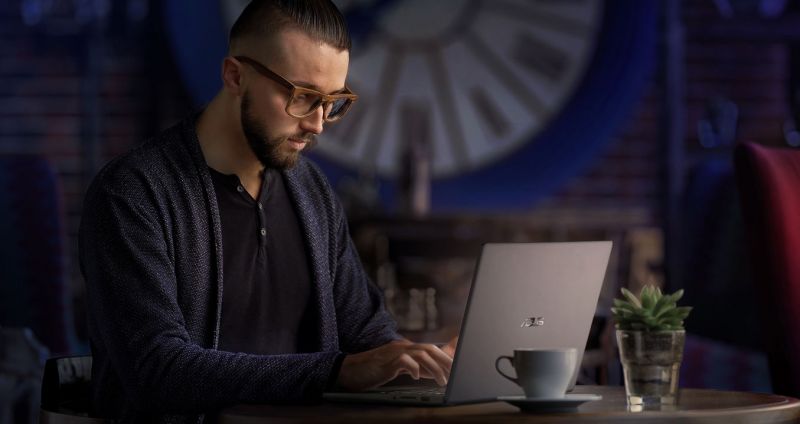 The ASUS VivoBook 14 follows the same design philosophy of the brand that we know and love. Available in a Silver Blue colourway, this laptop exudes a professionalism that can also fit in in a casual environment like say, for example, a coffee shop. While the all-metal chassis is what drives the laptop’s premium appeal, its claim to fame is its 14-inch display that’s tucked in a form factor of a 12-inch laptop. Also, as mentioned earlier, it exceeds military-grade durability standards which makes it not just pretty to look at but extremely robust as well.

The ASUS X403 comes with NanoEdge bezels, which is essentially the brand’s terminology for super-slip bezels. The brand has successfully been able to add a 14-inch Full HD display on a laptop frame that’s essentially 12-inches and that’s not it; it also features a massive 87 per cent screen-to-body ratio which is pretty impressive for a laptop. Prior to this version, we found these sort of specs only on the brand’s ZenBook range and it is great that ASUS is bringing these features down to its lower-tiered models. The top bezel comes equipped with a webcam and we are extremely thankful for this as certain brands have resorted to fitting it on the bottom bezel which makes for awkward camera angles.

Heat dissipation is taken care of by vents that are located near the hinge. This is a similar method that is used by Apple on its high-end laptops and we love the fact that ASUS has used it on this offering. 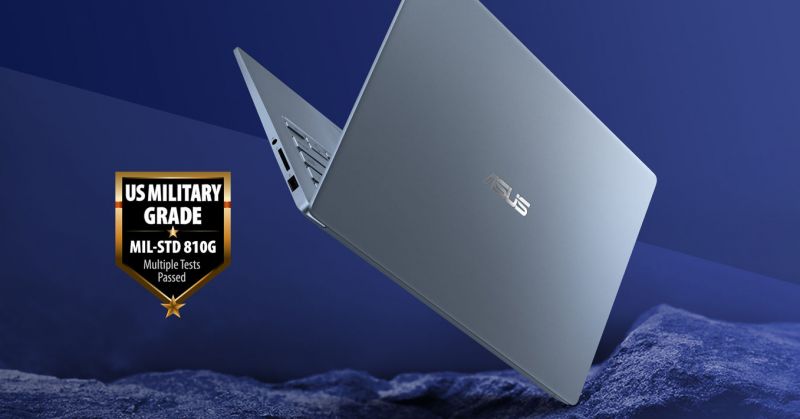 As mentioned earlier, the chassis is MIL-STD-810G certified and it features a sturdy build quality which is pretty much expected from a laptop that boasts this military-grade certification. The hinges for the lid are sturdy and there is practically no wobble. The Silver Blue finish on the X403 is resistant to smudges and scratches as it is made of anodized aluminium and this allows you to use it with confidence without needing a protective case.

Overall, the design and build quality is reminiscent of high-end ASUS laptops and it is great that the brand has brought this down to its more budget-friendly VivoBook lineup. 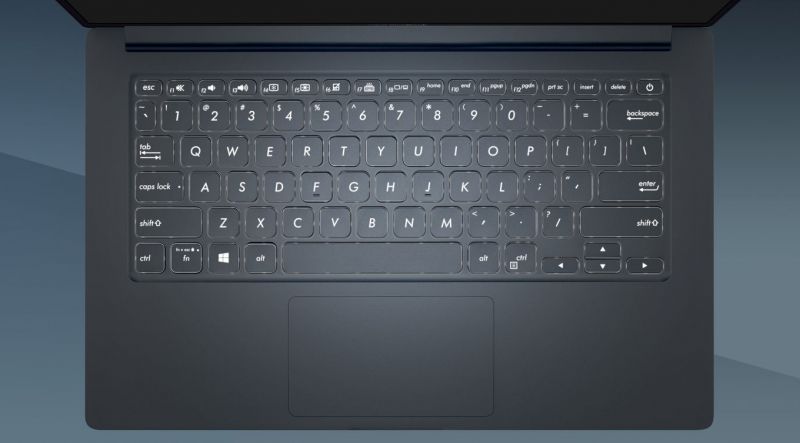 The ASUS VivoBook 14’s keyboard is backlit which has different levels of brightness that can be adjusted depending on your surroundings. We would have preferred it if the white backlight was a bit more subtle because at certain angles it tends to be a bit distracting.

Moving on, the keyboard has a 1.4mm travel which takes a bit of getting used to due to the lower than usual key spacing. Initially, we found there to be several accidental taps while writing articles but you will get used to it in a while.

The trackpad is made of premium glass material and we found it to be extremely responsive with scrolling through webpages and articles completely manageable. The trackpad also plays home to a fingerprint scanner that can be used for securely logging in to your VivoBook. 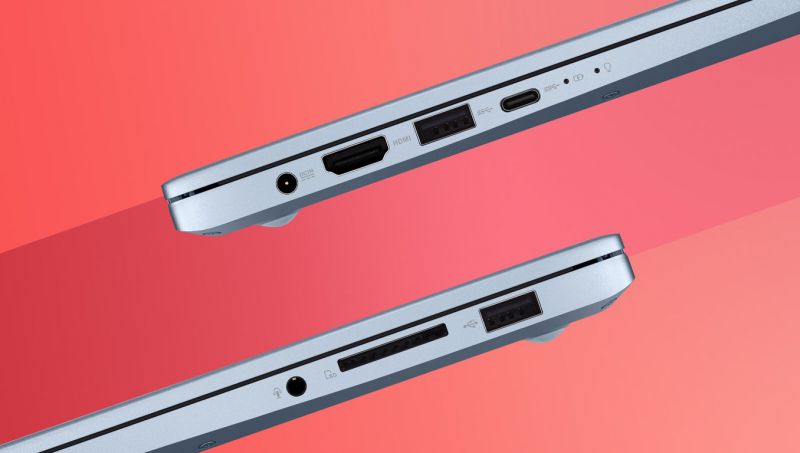 One thing that has been established here is that this is an extremely compact laptop and even though it has a small footprint, it feature-laden with all the ports and connectivity options imaginable. There are two USB Type-A ports, an HDMI port, USB Type-C port, headphone/microphone combo jack, full-size SD card slot and an AC charging port.

If we had one complaint about the laptop it would be that ASUS should have ditched this retro-style AC port in favour of an additional Type-C USB port that supports power delivery. This would not just make it futureproof; but also make it extremely convenient for the user.

ASUS have fitted a top-notch display on the VivoBook 14 and apart from its rather impressive screen-to-body ratio, the laptop boasts some practical usability features. The display features great colour reproduction that makes it a photo editor’s dream. The 178-degree viewing angles here are awesome as well and this makes it ideal for video consumption on platforms such as Netflix, Amazon Prime or YouTube.

Also, the display features what appears to be an anti-glare coating on this IPS display which makes accessing content outdoors completely doable.

As far as the display goes, the X403, out of the box is tuned well and you won’t need to adjust its brightness and contrast levels.

Since ASUS has used a Full HD display here, the text does not appear jagged as compared to laptops with lower resolutions and we found that scaling at 100 per cent to be ideal for us although Windows recommends scaling to be set at 150 per cent.

ASUS has also added a feature termed as True2Life which enhances the overall video quality. The brand claims that by using intelligent algorithms, the laptop optimises sharpness and contrast of every pixel in every frame that helps in producing vivid and realistic colours. 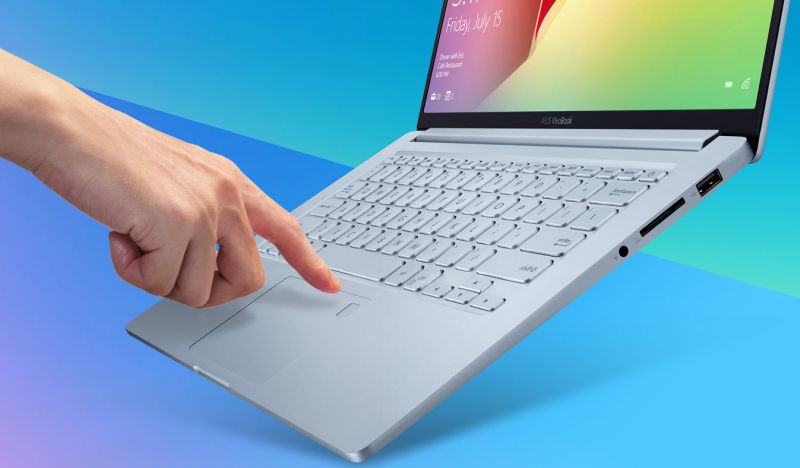 The ASUS VivoBook 14 comes with decent enough specifications and it runs on an 8th generation Intel Core i5-8265U processor that’s based on a 14nm process. This is a rather old chipset but considering the price, it doesn’t get too many complaints from us. As far as memory goes, the laptop comes with an 8GB LPDDR3 RAM that’s sufficient for carrying out various processes. Also, storage is pretty decent here and you get 512GB of ROM for the price you pay. Apart from this, the VivoBook 14 also comes with a high-end Core-i7 8565 quad-core processor that promises powerful and efficient performances on the go. Assisting this CPU, ASUS has fitted an integrated Intel UHD Graphics 620 GPU on this model which can be used for basic gaming on the lowest settings. Don’t expect to perform heavy-duty photo editing or playing high-end games here as this laptop will struggle.

Boot-time on the ASUS VivoBook 14 is fast and when undertaking tasks such as web browsing, word processing, and accessing video streaming content such as Netflix or YouTube, the laptop performs as advertised. However, when performing graphic-intensive tasks such as photo or video editing, predictably, the X403 falters. With this being said, you can perform basic Photoshop functions such as adjusting the colour or cropping an image effortlessly here. 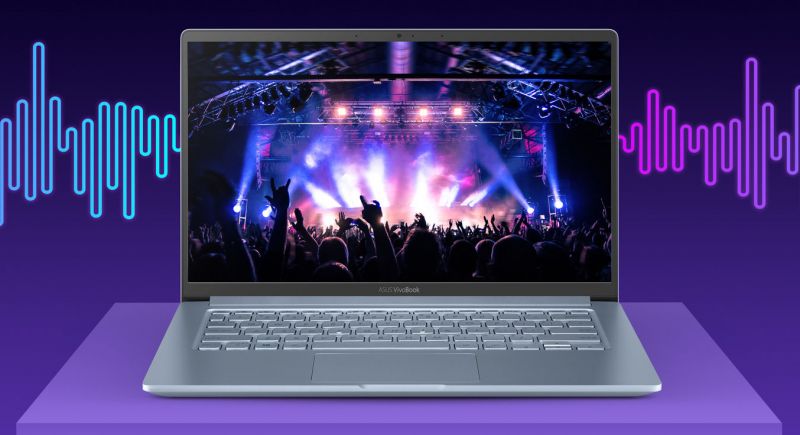 The laptop comes with two stereo speakers and it is backed by ASUS’ SonicMaster technology which is essentially a combination of hardware, software and audio tuning which helps in providing an ideal audio experience. As far as audio performance goes, the experience you get is on par of what you expect from laptop speakers and there is nothing spectacular to write home about. With that being said, the VivoBook 14 lives up to its billing when it comes to audio playback as long as you don’t expect above-average audio quality.

The ASUS VivoBook 14’s headlining feature is the 24-hour long battery life and during our testing period, we found that while running a series of processes, it managed to last approximately 22-hours. This actually astonished us as we haven’t yet witnessed a laptop that can last this long. During our testing period, we ran a few videos on Netflix, browsed the web and even wrote this entire review and the laptop still had enough juice in the tank. However, if you play back videos consecutively, the battery obviously won’t survive the stipulated 24-hours. This 24-hour claim is based on a combination of activities performed and not just by performing high-end battery-draining tasks. Instead, it is based on normal usage and a full charge can easily last two whole workdays which is honestly quite impressive.

The battery is kept alive by pairing it with a 45W charger and the 72Wh battery is easily one of the best we have witnessed on a laptop.

The ASUS VivoBook 14 (X403) is priced at Rs 54,990 in India and what it promises it delivers in spades. Seldom in today’s age will you find a laptop that provides you with a true all-day battery life and ASUS has done well to fit this massive battery in a form factor that’s extremely light and portable. The VivoBook 14 is intended for those on the go, for the frequent jet-setters and students or working professionals who don’t need to be tethered down by charging cables. So, if you are in the market looking for a laptop that can be your workhorse for basic tasks, then this option should be at the top of your list.