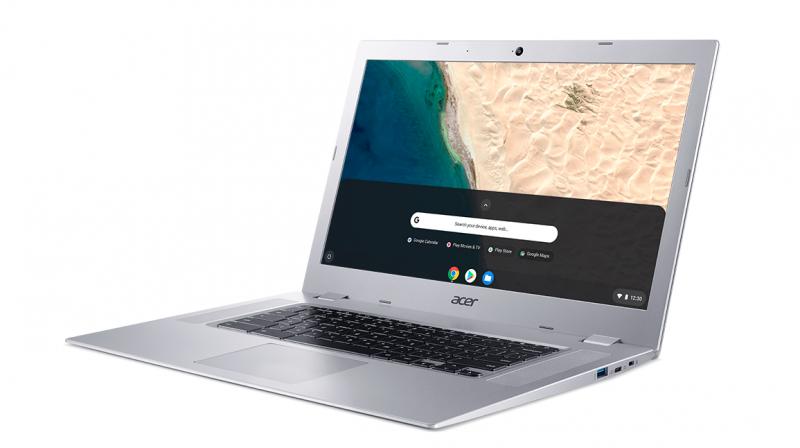 The Acer Chromebook 315 boasts a 15.6-inch IPS display and up to 10 hours of all-day battery life for web browsing, office applications, or online gaming.

Acer expanded its award-winning line of 15.6-inch Chromebooks with its first AMD-based Chromebook, the Acer Chromebook 315. Powered by 7th Gen AMD A6-9220C or A4-9120C processors with Radeon graphics, it can speed through demanding apps, while running multiple tabs and extensions, all during a battery life of up to 10 hours.

In addition to superior performance, the Acer Chromebook 315 has a Full HD 15.6-inch IPS display that is productivity-boosting for work and school. It vibrantly displays streaming video, web games and apps, and it’s available in touch-screen and non-touch configurations (CB315-2HT/CB315-2H).

The Acer Chromebook 315 is powered by 7th Gen AMD A-Series processors with Radeon graphics to provide fast and efficient computing in two configurations; either featuring the AMD A6-9220C APU or A4-9120C APU in a system-on-chip design. The new AMD A-Series processors for Chromebooks enable customers to stream video, run the latest apps, play web games and browse the Internet effortlessly for up to 10 hours1. Plus, the Acer Chromebook 315 supports millions of Android apps on Google Play for entertainment, productivity, connectivity and more.

Display and Audio for Entertainment, Productivity

The clear and vibrant 15.6-inch Full HD 1920 x 1080 display is large enough for opening browsers side-by-side, viewing streaming video in sharp detail, and playing web games. Customers can be productive with more viewing real estate and the power to run multiple tabs and apps. The IPS display lets users easily present slide shows and share content thanks to its wide 178-degree viewing angles. Even video chats can be shared. The HD webcam has a wide 88-degree field-of-view to accommodate groups. In addition, audio and video are crystal clear thanks to high dynamic range imaging and the built-in microphone.

Clear and crisp audio is the result of the Acer Chromebook 315’s two full-sized upward-facing speakers that flank the keyboard. The speakers support high-definition audio and deliver enhanced volume and audio range.

The design makes room for ample connections on the Acer Chromebook 315. There are two USB Type-C Gen 1 ports — one on each side of the device — to allow fast data transfers, charging and display output from whichever side is most convenient. It features fast WiFi 802.11ac wireless featuring 2x2 MIMO technology. Customers can connect peripherals via Bluetooth 4.2, two USB 3.0 ports and the combo headphone and speaker jack.

The Acer Chromebook 315 features a stylish IMR top cover and palm rest that are durable and light enough for moving around the home or office. It weighs 1.72 kg (3.79 pounds).

The new Acer Chromebook 315 is not only easy to use, but also easy to share with multiple users. Users simply log into their Google account to access Gmail, Google Docs, apps, extensions, bookmarks, and more. Chromebooks run on Google’s Chrome OS platform that updates automatically and uses multiple levels of security to guard against ever-changing online threats.

With the new Family Link app on Chromebooks, it’s easy for parents to set digital ground rules as their kids are exploring the Internet. Parents can set daily screen time limits, customize the list of websites and apps their children can use, and even manage their child’s Google account and remotely lock supervised accounts on the Acer Chromebook 315.