The first pair of true wireless earphones from Jays comes with a decent price and a sound signature that’s worth every Rupee. 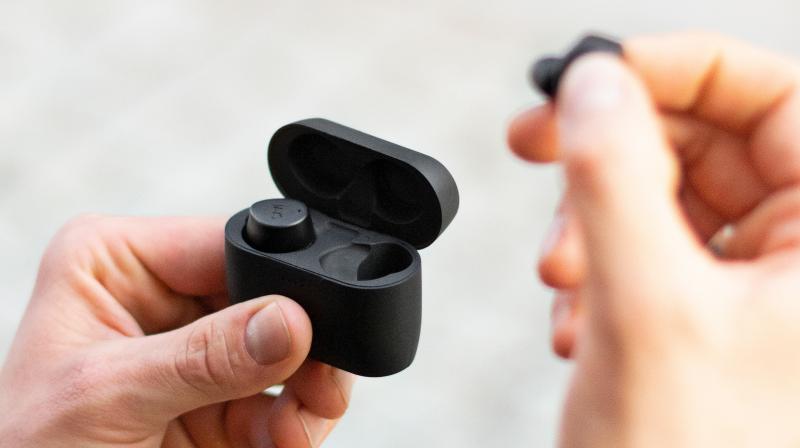 We can’t stress enough as to how much we love the design of the Jays m-Seven.
Rating:

2019 has been a great year for audio products. Whether it is headphones, wireless Bluetooth earphones or even true wireless earbuds, we have seen every major and minor brand flex their muscles and launch products that are worthy of splurging on. However, one segment that has seen a massive uptick in the audio sphere is true wireless earphones.

Samsung launched its Galaxy Buds, Apple introduced the AirPods Pro, Sony came out with the WF-1000XM3 and Sennheiser launched its Momentum True Wireless earphones. However, several audio-focused brands also stepped into the ring with their products that are worth their weight in gold such as the RHA TrueConnect and HIFIMAN with the TWS600. However, there was one brand that was noticeably absent and that is Jays.

Jays has now put the fashionable in ‘fashionably late’ with its first true wireless earphones, the m-Seven and these are easily one of the best models of the year. With the Jays m-Seven, the company has checked all the right boxes when it comes to design, audio performance and features. And as an added bonus, the brand has priced the m-Seven completely right with its retail price of Rs 8,999.

For a deep dive into what the Jays m-Seven is all about, read the full review below. 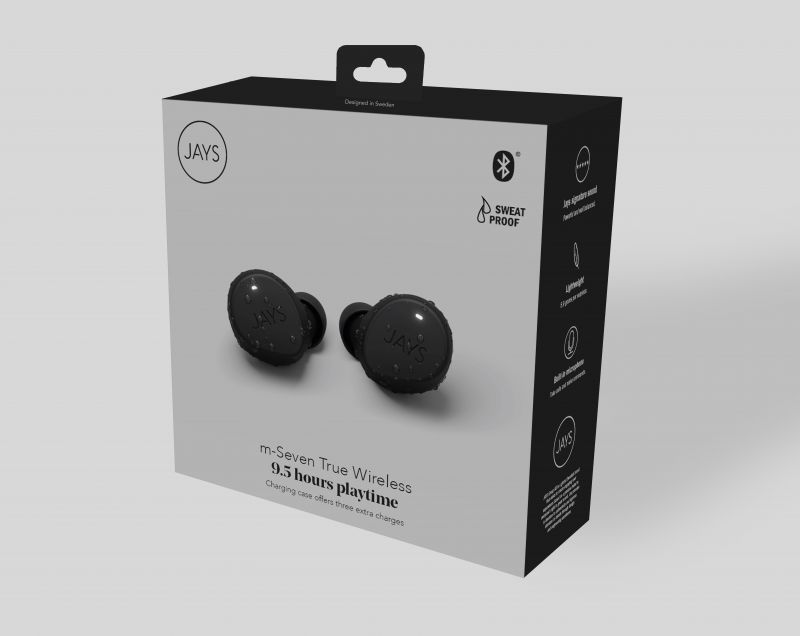 We can’t stress enough as to how much we love the design of the Jays m-Seven. Prior to this model, the only true wireless earphones that we actually found extremely comfortable was the Apple AirPods. Now, Jays have effectively stolen Apple’s crown and with the comfort level of dire importance when it comes to earbuds, Jays have done their homework and got everything right.

At first glance, you will be truly amazed at how tiny the Jays m-Seven are. Most true wireless earphones come with an added bulk in order to fit the drivers, batteries and other internals. With the m-Seven, we can see just how far technology has come in order to fit great-sounding buds in a miniature form factor that absolutely astonishing.

While the design is great, the fit is top-notch as well. This is definitely one of the most comfortable true wireless earphones which we have reviewed and this is especially important since there is no ear fatigue to concern you about even when listening to it for extended amounts of time. While these may not be the flat-style in-ear monitors such as the BEYERDYNAMIC Beat Byrds, the design is pretty ergonomic and it sits comfortably in the ear. In fact, they can be used while resting on your side as you lay down as well — which very few can claim to do.

The nozzle here is slightly angled as well and even though it’s short, it provides a snug fit in the ear canal. The Jays m-Seven comes with three sets of ear tips, one attached and two additional ones in the packaging. It is best to try all of these tips to ensure you get the perfect seal and fit which also helps with passive noise isolation to a great extent which is quite useful when in a noisy environment. 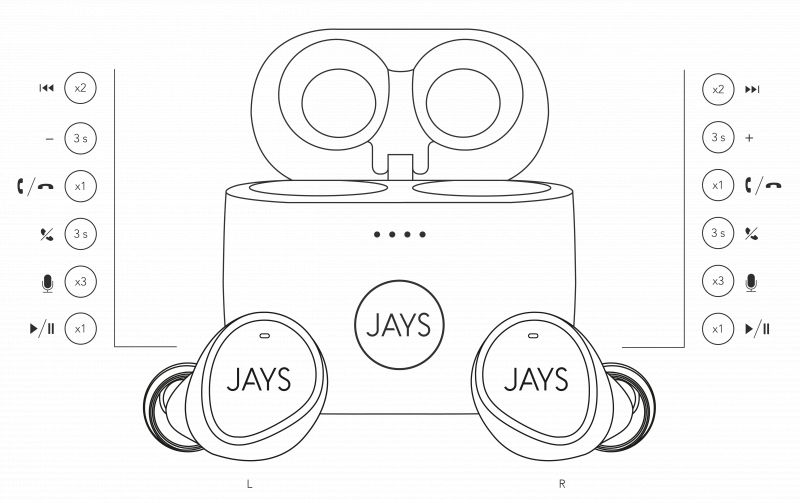 While not just being beautifully built, the Jays m-Seven also have some serious tech thrown in. The entire surface of both buds is touch-sensitive and these can be used for various functionalities. Over here we get the option for play/pause, answering calls, accessing your voice assistant and even control the volume along with navigating between tracks. There is no dedicated power off button here and that’s alright since when paused for a period of time, the buds go into sleep mode. However, to turn them back on, you will need to put them back in the case and remove them. This means that you can’t afford to leave your case away from you.

Like most true wireless earphones, the Jays m-Seven comes with its own charging case and the build quality here is brilliant as well. Like the buds, the case also features a rubberized coating which ensures that it’s scratch resistant. To make it future proof, Jays have added a USB Type-C charging port here. However, it is placed at the bottom, which is a weird design decision in our opinion. We would have preferred it if it was placed on the side or at the rear so when charging it can stand upright. With that being said, we feel that this will be a non-issue for most; but it is worth mentioning nevertheless. On the rear, there is a small button which when pressed activates the LED indicators upfront. These lights denote the amount of battery left in the case. 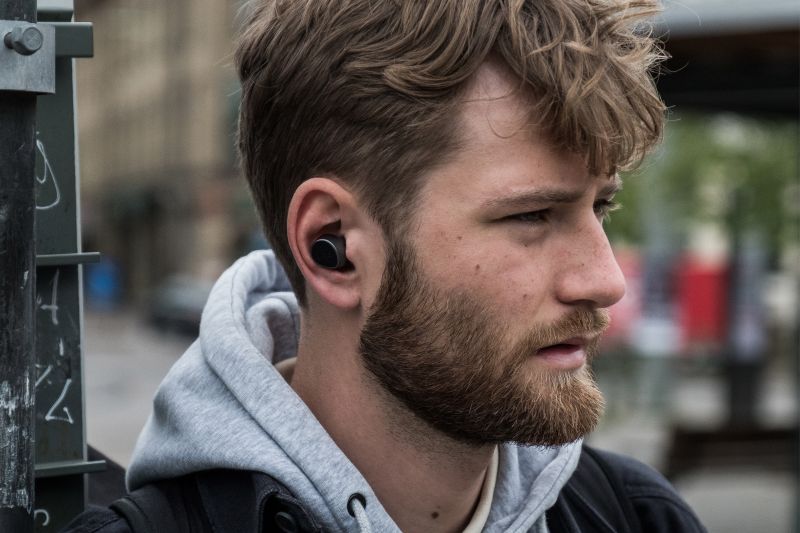 The Jays m-Seven are also not just designed well, they are also rich in features; chief of which is the extensive battery life that comes along with it. This is one feature that really puts it head and shoulders above the competition and a 9.5-hour battery life on a single charge is nothing to scoff at. Rival true wireless earbuds manage just half the amount which these offer which shows that Jays have put in a lot of work to ensure you get the best possible audio experience. Additionally, you get 38 hours total playback time in the charging case which means that during our testing, we used it for over a week without needing to top up the battery.

Another highlighted feature here is the IPX5 Ingress rating. This means that these are modelled to be sports earphones as they fall under Jays ‘M’ series which stands for Motion. These earphones can also be used for workouts during the rains which make them quite resilient.

Jays have fitted these with Bluetooth 5.0 which is rapidly becoming the standard for true wireless earphones. Setting up the earphones is straightforward and subsequent connections remain flawless. During the testing period, we did not notice any loss in connection even when the source was kept at quite a distance from the m-Seven.

Probably the only downside to these earphones is the lack of codec support. We tried locating what Bluetooth codecs these earbuds supported but to no avail. It would be great if the brand had added some popular codecs here like aptX. 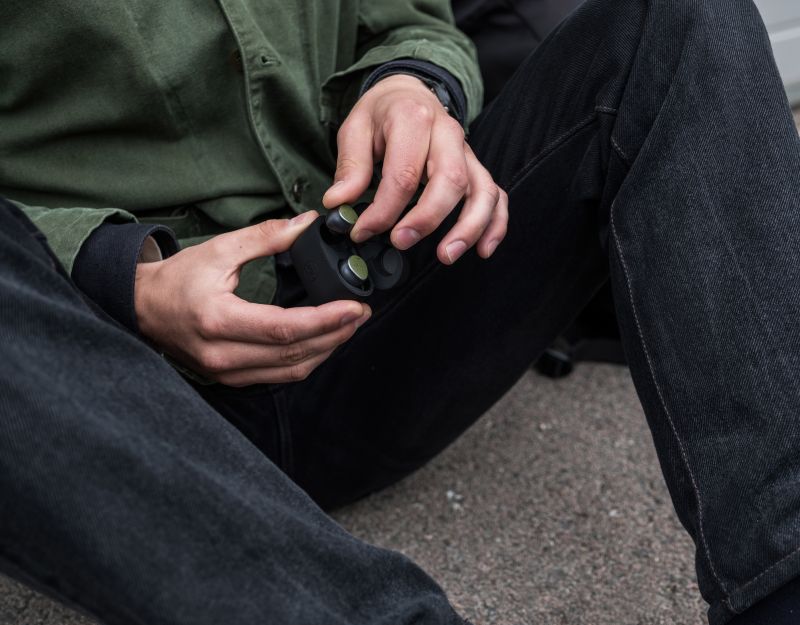 The Jays m-Seven comes with 6mm dynamic drivers and a frequency response of 20-20KHz. This may not be Jays primary intention; but, the m-Seven are great for the bassheads out there. There is a significant amount of thump in the lower-end that makes these a fun pair on in-ear monitors. However, even though the bass packs a punch and boy it does, it still manages to produce an accurate sound across the entire lower-range. The audio quality really comes alive especially with drum solos or bass guitars but without drowning out the rest. That being said, the emphasis is on the mid-bass area but still well within control for a true wireless earphone.

The midrange does get a little bit affected by this enhanced bass especially in the lower-midrange. This makes the frequency appear a bit dense but forgiving. Where the upper-midrange is concerned, the audio here is detailed and clear with vocals appearing to pop. A point that needs to be noted is that there is no distortion present here whatsoever making the m-Seven one of the best at handling the mids with ease the way only Jays know how.

The highs are where the Jays start to shine and just like the lower-end, there is a nice sparkle to the upper range ensuring there’s a brightness that’s not wanting more. Overall, these are extremely competent earphones that not just please the workout enthusiasts; but also anyone who is looking for a great sounding pair of true wireless buds. 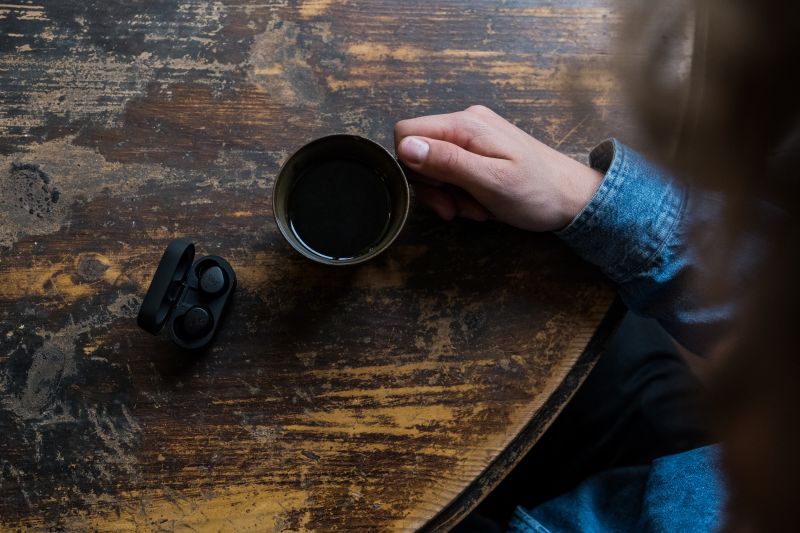 The Jays m-Seven is priced at Rs 8,999 in India but available for as low as Rs 7,999. These are one of the best, if not the best earphones in the sub-Rs 10K price range and with features aplenty, they should definitely be on your list when purchasing a pair of true wireless earphones. In the sub-Rs 10K segment, the Jays m-Seven has no rival and it has the ability to punch way above its price range.

Clubhouse might be working on 'Waves', a new feature to invite friends to chat