The Canon EOS 200D II is aimed at those upgrading from phone-cameras to their first DSLR, offering the best of both worlds. 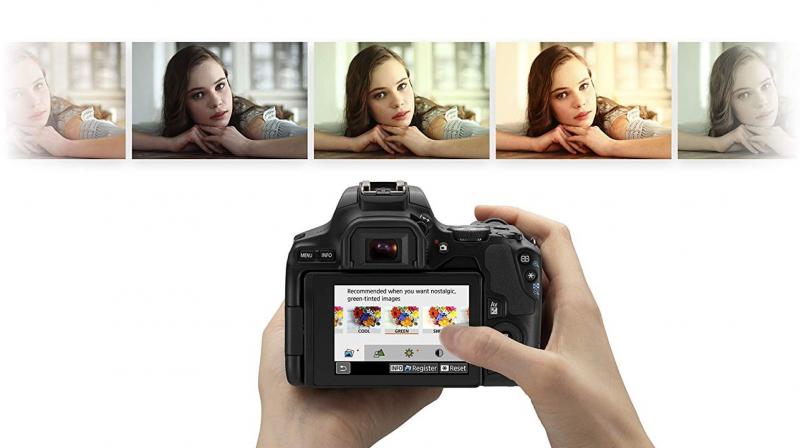 The basic body made of polycarbonate with carbon and glass fibre weighs less than 450 grams.

The tail wags the dog, now. Who would have thought that mobile phones, which offered an on-board camera (or 2 or 3) as free extras to the basic call function, would influence the design of Digital Single Lens Reflex cameras! And here's the added irony: to attract phone owners to invest in a dedicated DSLR, camera makers are touting features that came first to the phone: easy brightness adjust and bokeh blurring, the ability to add effects or change focus after shooting. Then they throw in a large, adjustable LCD screen to monitor your shot -- much as you do on a phone screen.

I have been trying out the Canon EOS 200D II DSLR and am struck by how easy the makers have made the learning curve for lay users graduating from phone cameras. This is a fully professional tool, if you want to play it that way: 30 seconds to 1/4000 sec shutter, a proprietary dual pixel system to make autofocus fool proof, 5 shots/second burst mode; a 24.1 MP sensor; 4K movie shooting and a choice of two lenses: 18-55mm and a 55-250mm zoom. If you are a beginner, you can select the Creative Assist mode and leave all the settings to the camera's own brain. Like phones, the 200D comes with multiple communication technologies: WiFi, NFC and Bluetooth so that you can send you pictures zooming to social media, second after you have snapped them.

I was also struck with how light and compact Canon has made this camera. The basic body made of polycarbonate with carbon and glass fibre weighs less than 450 grams. The standard lens adds another 250 grams, while the zoom is another 400 grams. A handy tool -- and a versatile one -- as you take your first steps to professional photography. The Canon EOS 200D II with 18-55mm lens is Rs 52,995. If you also want the 55-250mm lens it is Rs 65,995 -- but look for some discounts online.