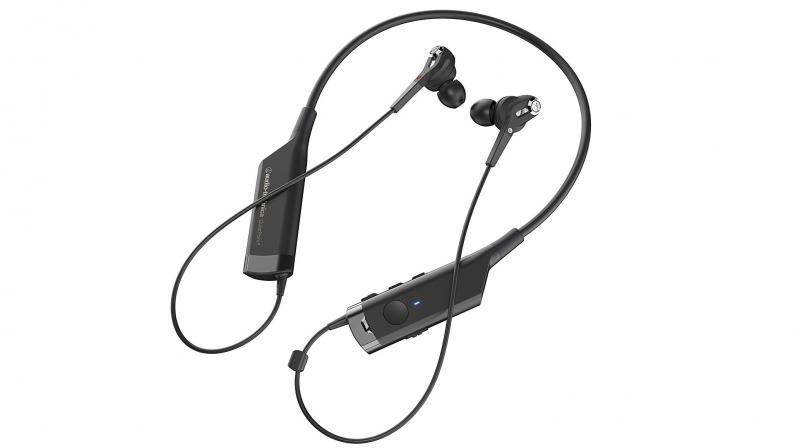 Audio Technica is known for balanced audio quality across its entire range of products and the ANC40BT is no exception.
Rating:

As we know, the world is moving towards a wireless future and smartphone manufacturers are quickly dropping the old-school 3.5mm analogue headphone jack in favour of either digital audio or completely wireless headsets. When it comes to the convenient user experience for earphones, the wireless ones dart ahead of the wired counterparts, especially outdoors. However, they are plagued by usually shorter battery life and average audio quality. Audio Technica — a renowned name in the world of audio accessories, has a pair of wireless earphones that claims to address these issues. The ATH-ANC40BT is a neckband-style wireless pair of earphones that comes with a price tag of Rs 16,990, which falls in the premium category. Therefore, does it have enough reasons to justify its high price tag? Let’s dive deeper. 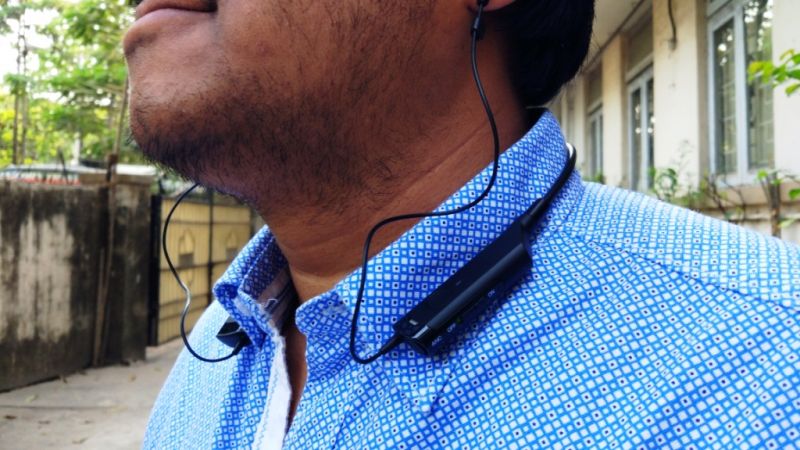 As stated, the ANC40BT is a neckband style pair of wireless earphones, which means the user has to still deal with minimal wires. The neckband consists of two weights at either end, connected by a band. 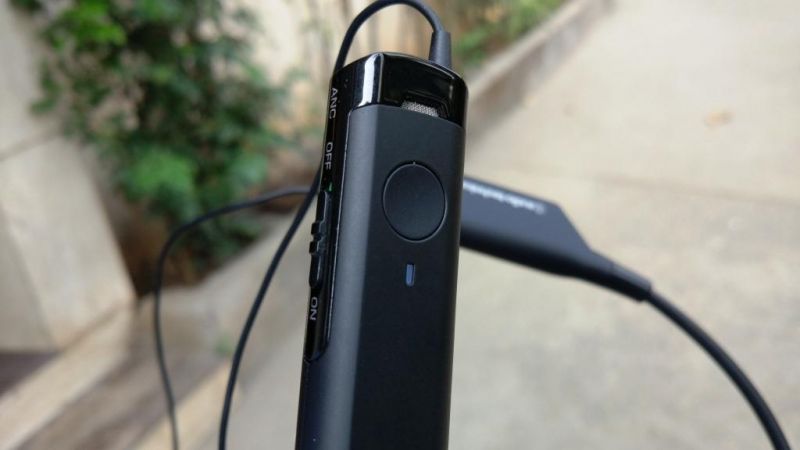 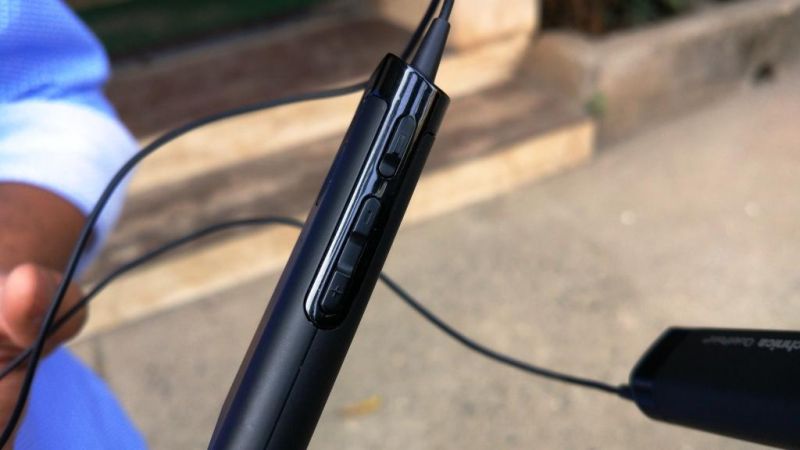 The neck weights are functional too — one of them contains the battery, whereas the other one houses all the media playback controls, the microphone and the charging port. The media playback buttons consist of a play/pause button and two volume adjustment buttons. The volume buttons also change tracks, although one has to press and hold the buttons for approximately three seconds. 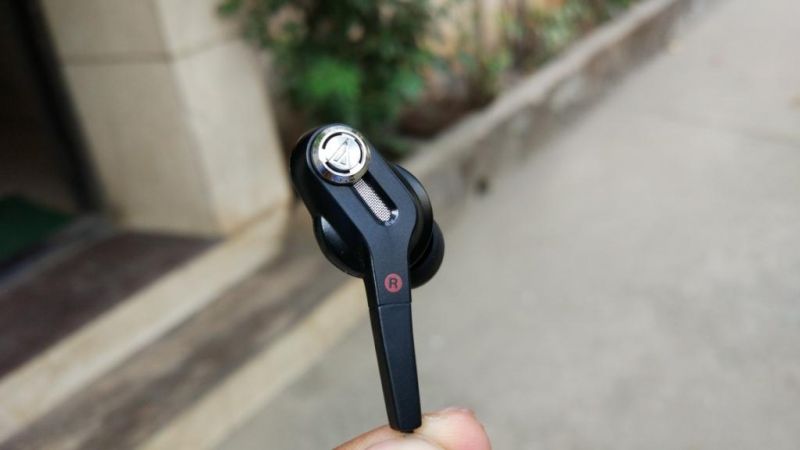 The earbuds on this baby are big — noticeably big. And that’s because they house all the bits and pieces required for noise cancellation. Yes, the ANC40BT are equipped with Audio Technica’s QuitePoint active noise cancellation technology and we will talk about it in a while. 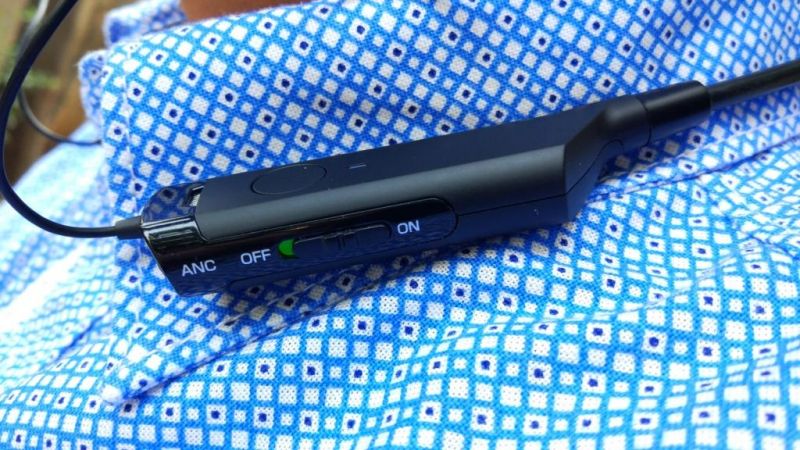 The ANC40BT can also be operated in the wired mode, i.e. if you run out of battery or need to use it with a device that doesn’t feature Bluetooth, then you can use the supplied micro USB to 3.5mm connector cable for using it as a wired headphone. Therefore, theoretically, you are never deprived of music with the ANC40BT, unless your phone's battery dies. However, in the real world, carrying additional cables along with your daily necessities isn't convenient.

The ANC40BT is pretty lightweight. The band doesn’t cause irritation on the neck when worn for extended sessions of usage. However, what irritates are the large oddly shaped earbuds, which aren't very comfortable for longer durations. The odd-rectangular shape of the earbuds doesn’t gel well with the earlobes — one has to often spend some considerable time to get the most comfortable fit. 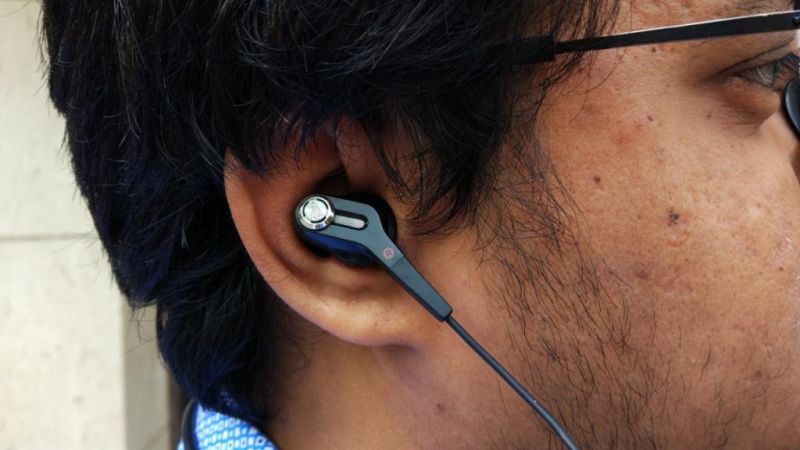 This is surprising when you consider the fact the ANC40BT comes from an audio specialist brand like Audio Technica. Additionally, as the earphones are not entirely wireless either, the wires connecting the band and earbuds occasionally cause discomfort.

Audio Technica is known for balanced audio quality across its entire range of products and the ANC40BT is no exception. Most of the frequencies in any given audio track can be easily distinguished — courtesy the notable clarity through its 13.5mm drivers. The mids and highs are well rendered, with no noticeable distortion in the higher frequencies. However, what’s lacking here is a solid bass — the low frequencies are adequate, but don’t pack that ‘thump’ one expects from a headphone in this price category. 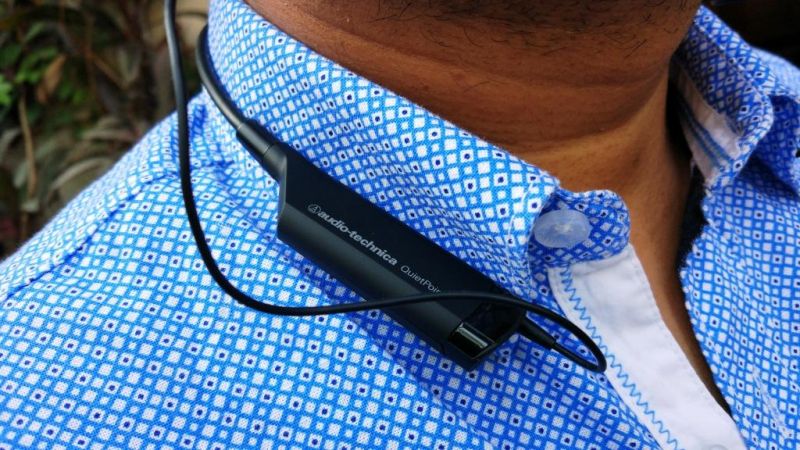 However, the noise cancellation on the ANC40BT can at most be described as above average. It works when you are travelling in a car or airplane, isolating you from the humming sounds of engines or other lower frequencies measuring up to 20dB. However, go jogging wearing it and you won’t be completely isolated — it’s possible to hear children screaming and people having loud conversations. Also, if you are riding a bike, the wind noise becomes annoying as the earphone tries to compensate for the ambient noise with an annoying disturbance. The earphone manages to dampen the lower frequencies effectively but falters highly with high-pitched frequencies. Overall, the audio performance makes it recommendable primarily for indoor use or at most while travelling in a car or aircraft.

It’s difficult to decipher the exact battery capacity, but the ANC40BT manages to last for almost four days with a consistent usage session of approximately 2-3 hours each day. Do note that this battery stamina is achieved with the noise cancellation kept switched on at all times. Dial it down and you will end up with the manufacturers' claimed battery life of maximum 13 hours. The battery can be charged via any micro USB charging cable, which is highly convenient considering the abundance of such chargers around.

Should you consider the Audio Technica ANC40BT wireless headphone if you have Rs 16,999? If the audiophile inside you craves for a balanced audio quality with a focus on clarity, then we would recommend you to go ahead with this headphone. The noise cancellation is an added advantage, however, we wish it could have been more aggressive in blocking high-pitched noise, considering Audio Technica’s lofted standards of audio tuning. Additionally, the lack of a bassy flavour could turn off bass-heavy hunters.

To sum it up, the ANC40BT excels with a focus on balanced audio quality and very good battery life. However, a slightly underwhelming noise reduction and a lower priority on bass could probably be a concern to some.