Samsung has filed a patent for AR glasses that features a display that’s automatically powered on and off by its frames. 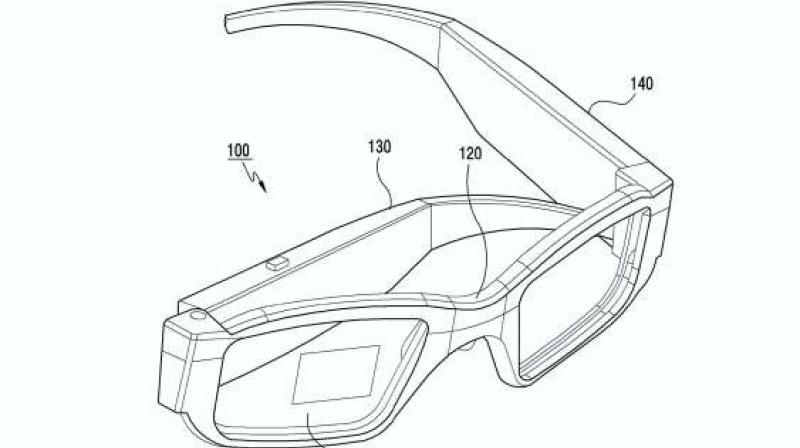 Like advanced AR glasses, Samsung’s option will display a translucent images that shows up on top of the user’s field of vision — most likely making use of waveguide technology to diffract the projection so as to convey 3D depth.

Like a wide amount of technology companies out there, Samsung too focused on building mixed reality glasses such as virtual reality instead of augmented reality. However, a new patent that has been published and discovered by patently Apple says that Samsung is actively working on its AR glasses with a breakthrough technology — frames that automatically power on and off a display.

Some AR headsets such as Microsoft’s HoloLens and Magic Leap’s One wrap fully around the wearer’s head like industrial goggles, Samsung’s option is quite different. They are more like a pair of plastic sunglasses that are similar to those from Oakley and Bose. The biggest difference between these audio glasses and Samsung’s is a small square display that would appear from in front of at least one of the wearer’s eyes with it being reflected from a prism onto the lens from a projector that’s housed near the temple.

Like advanced AR glasses, Samsung’s option will display a translucent image that shows up on top of the user’s field of vision — most likely making use of waveguide technology to diffract the projection so as to convey 3D depth. Instead of using a dedicated power button, Samsung’s AR glasses would automatically turn on the projector when one of the temple’s frames are opened. It would turn off automatically when the temple frame was closed therefore conserving the device’s battery.

As per a report by VentureBeat, “Given the normal movements of a wearer’s head, keeping the projector from jittering on and off during frame jostles would be important. To that end, Samsung suggests that magnets near the hinges would be used to maintain the “open” temple position, as well as to complete a flexible electrical circuit running from one temple’s battery through the frames to the other temple’s projector.”

The Samsung patent discusses the technology in-depth and Samsung is not limiting themselves to the specific frame shape shown in its filing or a way that the AR glasses might operate. The report states, “It presents the possibility that the frames might contain all sorts of different processors — standalone ARM chips and/or more dependent processors — with anything from short-range (Bluetooth) to long-range (cellular) wireless technology. That sort of flexibility is fairly standard in patent applications, leaving the door open as wide as possible to prevent others from using the same idea in a similar but not precisely identical device.”

While Samsung has filed a patent for its AR glasses this doesn’t necessarily mean that the company will launch it. The possibility that Samsung is looking for practical implementations for wearable waveguide technology is exciting in itself.

With Apple also expected to be debuting its own AR glasses, Samsung poses the only real threat to Apple sweeping up the market that’s waiting to be exploited.