This 4K enabled camera is equipped with a DIGIC 8 image processor and is targeted for the current Insta generation. 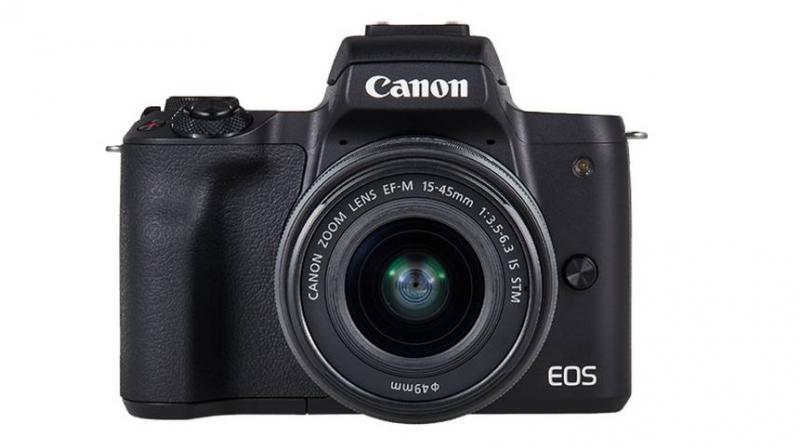 Canon has launched — the EOS M50 mirrorless 4K camera for the Indian Market. It is powered by the DIGIC 8 image processor and features 4K movie shooting ability. With an improved dual pixel CMOS AF, the EOS M50 promises to shoot ultra-high definition videos under low light conditions. With the touch and drag AF, users can select and move the AF frame via the touch panel while looking through the built-in 2.36 million dot electronic viewfinder (EVF).

The company claims that the EOS M50 is targeted for current Insta generation. The M50 claims to be a lightweight and portable camera with interchangeable lens.

The EOS M50 with the 4K movie shooting support claims to produce footage four times the resolution of full HD focusing on depth and clarity. The 4K Frame Grab function allows for high-resolution images to be extracted from footage taken, where users can store them as a still photo. With the dedicated time-lapse movie setting, the camera allows users to capture time-lapse videos in 4K as well.

Additionally, with combination IS, the company claims that users can expect reduced camera shake during movie shooting. Even when using non-IS lenses, the EOS M50’s promises to take stable video recording with its built-in five-axis stabilisation feature. Users can also shoot in a high frame rate of HD 120p to render slow-motion videos.

Powered by the DIGIC 8 image processor and an approximately 24.1MP APS-C sized CMOS sensor, the EOS M50 promises to capture clear images in low light conditions. Through the use of built-in electronic viewfinder (EVF), the company says users can capture a highly accurate image by the camera sensor and can shoot without glare interferences even under bright sunlight. With the normal ISO speed of 25,600 and expandable to 51,200, the camera promises to achieve clear shots with minimum noise for photos even in low light conditions. The EOS M50 has a newly added silent mode (applicable in scene mode) that can shutter the mutes sounds as well.

The EOS M50’s is equipped with dual pixel CMOS AF sensor to cover a larger AF area with up to 143 AF points (covering 88 per cent horizontal by 100 per cent vertical area) when a compatible lens is attached, offering high-speed AF  over a wider area. The larger AF area promises to achieve fast, accurate and smooth AF when capturing moving subjects. Additionally, the touch & drag AF feature should help users to easily switch the subject of their focus by dragging the AF frame directly on the LCD panel even while composing a shot through the camera’s EVF. It supports a continuous shooting speed of approximately 10fps in one shot AF and 7.4fps in Servo AF.

The EOS M series is equipped with a vari-angle LCD monitor that hosts navigation features. The EOS M50 has buttons and dials located on the right side of the camera for one-handed operation.

In terms of connectivity, the EOS M50 supports Bluetooth, WiFi and NFC for smart device sharing. The company is also providing a dedicated Canon Camera app for both iOS and Android platforms. The app allows users to control camera settings and in transferring of images.