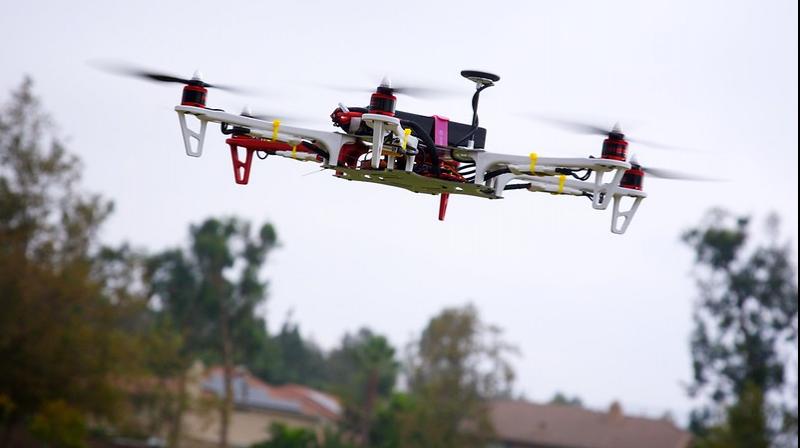 The Madrid municipal police put out a video on twitter of the drones in action. (Representative image | Flickr - Richard Unten)

Chennai: It’s almost like a scene in a futuristic movie with unfortunate Big Brother undertones, as drones buzz around telling people to get off the streets and go home, to help stop the spread of the coronavirus. But no reason to panic, as unlike the sci-fi films, these devices cannot pin one down or detain anyone, they merely urge one to take precaution.

In a country such as Spain, where in a matter of a couple of weeks, as many as 9,191 people of its 47 million population had contracted the pathogen by Monday, the government has put the nation on a near-lockdown. Since this past weekend, police in Madrid began using drones with loud speakers to drill it into the heads of the citizens still roaming about that they may be putting themselves and others at risk.

The Madrid municipal police put out a video on twitter, of the drones in action. A police officer is seen handling the drone, which plays a loud message telling people to stay home, and go outside only in absolutely unavoidable circumstances.

“We won’t hesitate to use all the measures we have at our disposal to look out for your safety and everyone’s safety,” the police wrote on Twitter, but also added a reality check, “although some of you will give us a hard time,” gizmodo reported.

People in Spain who are suspected to have been infected and try to break quarantine can be fined up to 600,000 euros and face imprisonment.

In Dubai, people have stopped indulging in their favourite pastimes of congregating at the local tea shops for a cuppa, and at the shisha bar for a drag of tobacco smoke. Despite the drop in the crowds outdoors, the number of people infected by the coronavirus in the countries of West Asia has surpassed 15,000.

Drones were spotted in Dubai, the financial capital of the United Arab Emirates, as well as in cities of Kuwait, urging people to stay home. The announcements were made in multiple languages, keeping in mind the large expat population that lives in the GCC (Gulf Cooperation Council) nations.

On state television, Kuwait’s Health Minister Basel Al-Sabah said, “I urge you by God to stay at home." The country has announced a complete lockdown, where even Friday prayers are not being held at mosques.