The Nighthawk AC3200 offers a clever Wi-Fi network for those who want to extract every bit of their Internet connection. 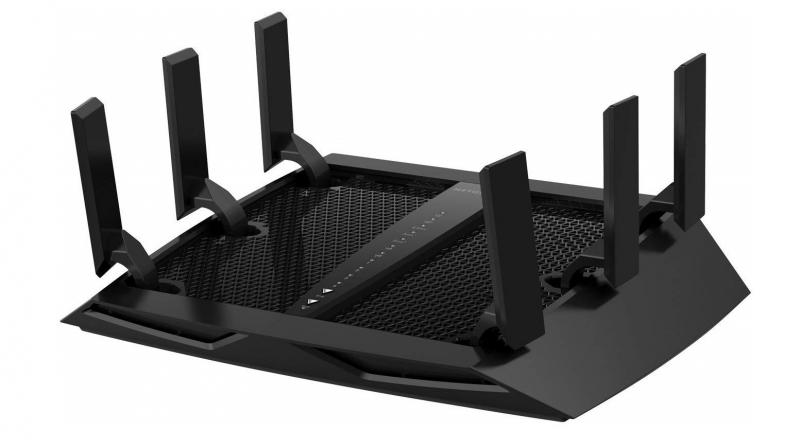 At first glance, the Nighthawk AC3200 looks like a weird and mean mini alien spaceship, or like a large bug turned turtle.
Rating:

We are living in an age where the Internet has become the backbone of our routine lives. While we have been subjected to quick Internet access on the go, it’s equally important for ensuring faster connections at homes, especially if you are well surrounded by smart appliances today. That also stands true for gamers, who require faster connection speeds for ensuring an edge in multiplayer titles.

Usually, you would go for faster broadband connections for ensuring a stronger Internet connectivity. However, all that speed and stability mainly depends on the Wi-Fi wireless router that you are using, especially when you are using multiple internet devices simultaneously on the same network. The ones that you usually find off shelves are good enough for mobile devices with basic browsing requirements where 5 - 15 people are casually using it. For power users though, a dedicated hardware is required that can deliver the maximum Internet speeds to devices around the house, without compromising on range, signal strength and bandwidth loss.

Netgear has something that fits the role too — the Nighthawk AC3200 Tri-Band Wi-Fi Router. For Rs 12,999, it offers a lot of power packed features — a triple-band network, loads of connectivity options and much more. But how much of an improvement would you get for your moolah when compared to a standard Wi-Fi router? Let’s find out.

At first glance, the Nighthawk AC3200 looks like a weird and mean mini alien spaceship, or like a large bug turned turtle — thanks to sharp lines and a unique shape which is designed for performance and a mean look. It is in fact almost as big as a personal weighing scale. The top is mostly dominated by a large heat vent and a control panel with an array of LED indicators and button in the centre.

The LED indicators show status for Internet connectivity, the three bands, network security status and more. Two main buttons on the top provide features such as disabling the Wireless network for added safety towards intruders, and a button for WPS. Towards the top edges on either side, there’s a set of three pull-out and directional antennas each, each one of them being almost 5cm tall. The antennas can be extended outwards up to an angle of 120 degrees at any angle. 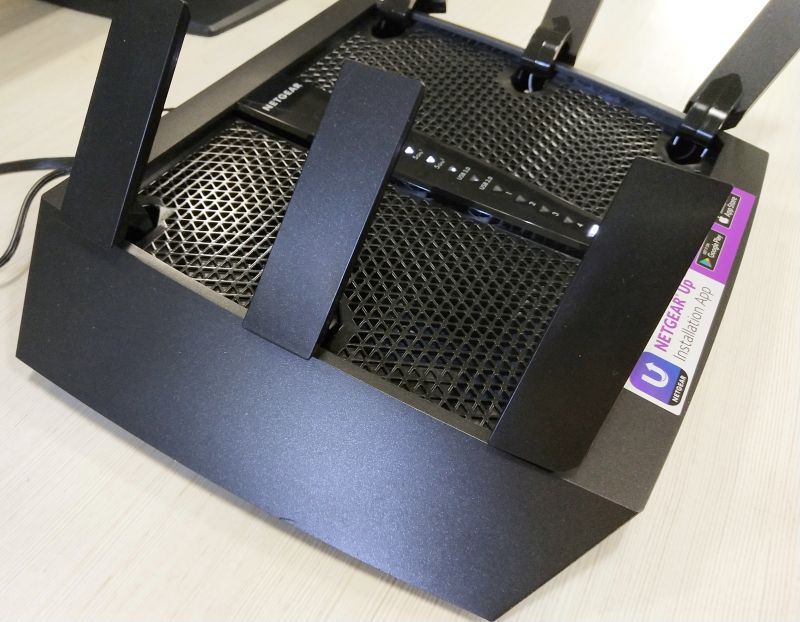 Towards the rear, we find a variety of connectivity options — 1 x Gigabit WAN port and 4 x Gigabit Ethernet ports, 1 x USB 2.0 port for connecting printers and pen drives to the local network and 1 x USB 3.0 port for plugging in high-speed external storage drives or portable hard drives for sharing data and streaming media across connected devices on the network. Forming a simple mini-NAS device, you can simply connect your hard drive to the network and stream movies via the Netgear Genie app. Lastly, a power-ON/OFF button, and if you don’t like your Wi-Fi router to dazzle with bright LED indicators especially in darker rooms, a dedicated button to turn those LEDs off is also provided. 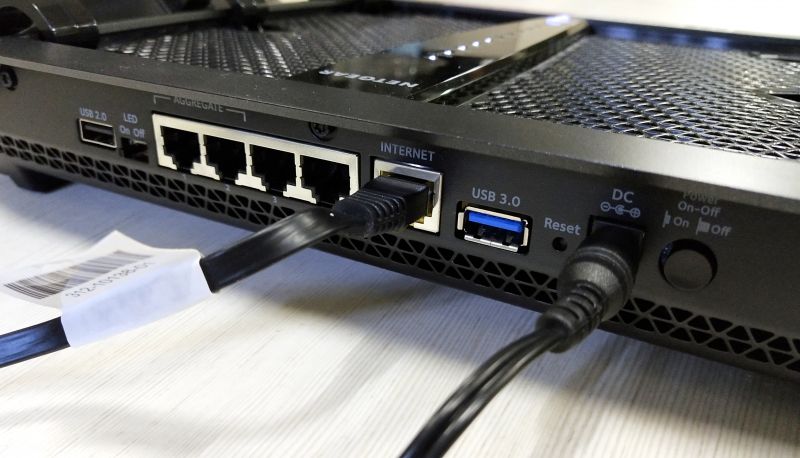 The bottom has the usual rubber pegs and a wall mounting option to help keep the router at safe distance and best visibility for action. The entire body is built solid and robust, but we did find that the antennas, especially the hinges, are very feeble and can break easily if not handled properly. However, since the router will never be touched after being configured, the problem is not as grave as it sounds.

As stated, the Nighthawk AC3200 router supports triple bands — 2 x 5GHz networks for all modern supported and compatible devices and 1 x 2.4GHz network for older ‘legacy’ devices such as older laptops and smartphones. The router also supports MU-MIMO, which can support compatible wireless adapters with up to three clients simultaneously on both the 5GHz bands. Netgear claims the tri-band router with the dual 5GHz bands are capable of throughputs of up to 1,625Mbps and up to 750Mbps on its 2.4Ghz band. Powering the onboard logic board is a speedy 1.8GHz dual-core processor and three Broadcom offload processors alongside 512MB of RAM. This hardware is specifically chosen to make sure that all clients in the network are easily managed without compromising on speed and services. 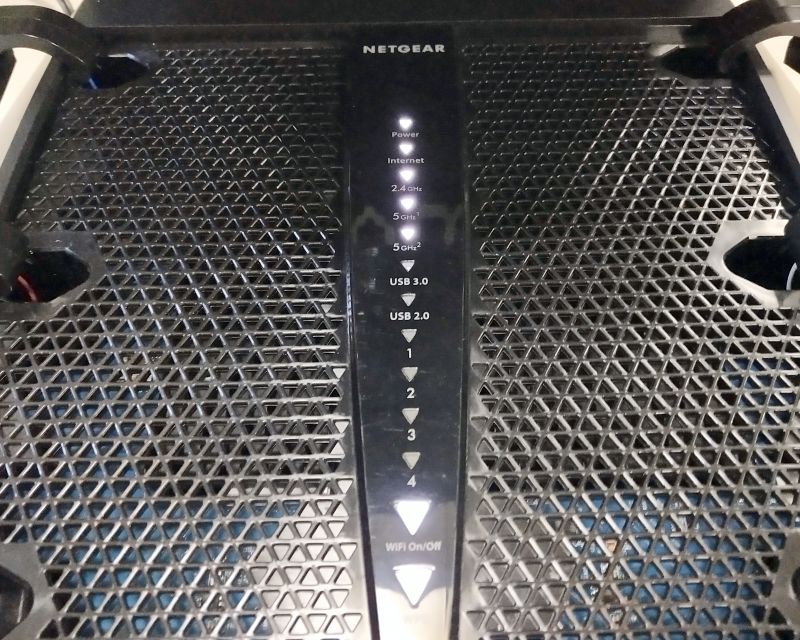 Setting up the AC3200 is pretty easy, especially using the Netgear Nighthawk app. Power users would probably use the old method of the browser route, but the app is meant for those users who don't necessarily know the networking area. Simply launch the app, create and log in to your Netgear account, let your phone search and detect the new router, set a name and password (SSID) for the network, and you're done — it’s that simple. The app will also notify if there’s a firmware update for the router and install it after the setup is complete. 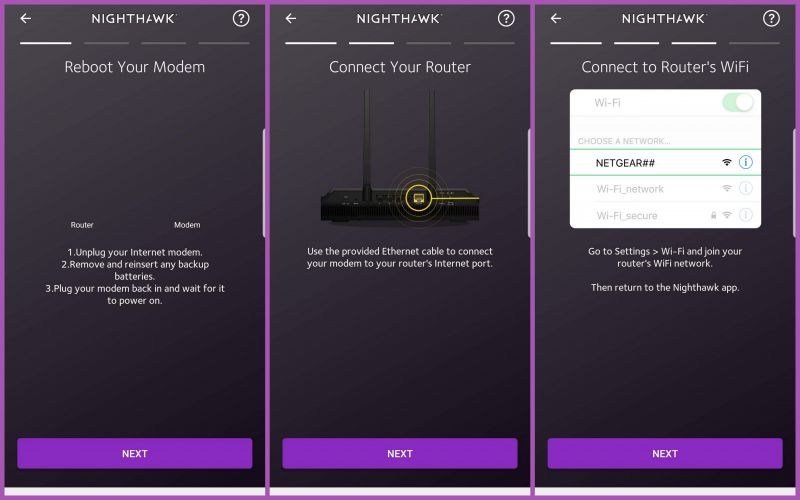 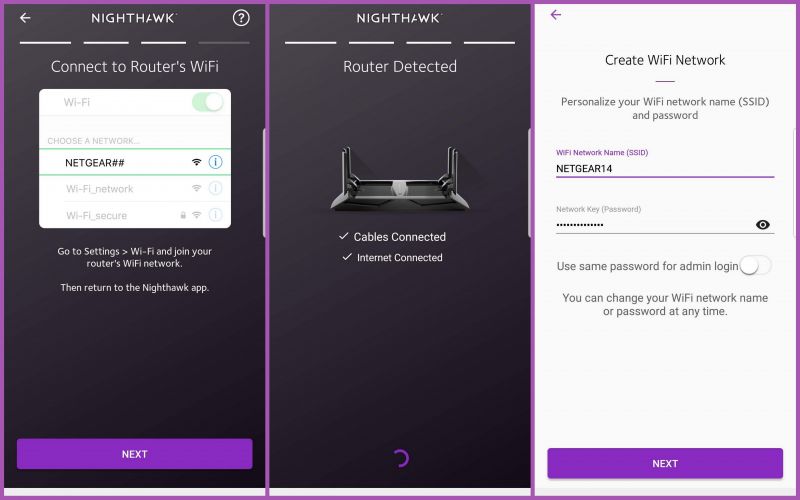 Our test location was our office itself with multiple internet connections and PCs working in tandem. While setting up, one can choose whether to keep the three bands as separate networks (SSIDs) or combine them under one single SSID with Smart Connect, following which the router’s onboard computer and AI will smartly figure out how to efficiently distribute the network across multiple connected devices.

When it comes to the wireless signal range, the router was able to deliver close to its highest speeds even up to a distance of 30 feet without any obstacles. Beyond that, the network speeds started deteriorating and it was only after 80 feet with multiple obstacles such as wooden walls, office furniture, etc that it was a bit difficult to sustain even basic Internet browsing. But that's normal.

We connected a host of devices and requested our colleagues to also latch on to the network for a test drive. While some were asked to play a few games, others were told to stream a few movies and music, simply to gauge how the network works in the given scenario and how the router can manage all the data around. To our surprise, we saw that automatic selection from the router's own defaults managed to keep most of the client's devices stutter-free. In short, the router managed to serve clients with media and gaming requirements a faster network when needed, while those who needed simply browsing were given an unrestricted, but a bit lesser attention than needed. Tweaking the router's settings from the app also allows us to manage the bandwidth with priority access to devices and clients at our preference. So if you need your media streaming devices and gaming consoles to get uninterrupted priority bandwidth, you can do that with ease.

The second app, Netgear Genie, allows you access most of the router’s special features. Through the app, you can keep a tab on all the devices connected to the network or use the router as a print server or network storage too. Sadly, you can only download files from the attached portable drives — transferring files to the external storage isn’t possible via the Genie app. The app also lets you share and transfer data to other devices on the network, provided they too use the same app. 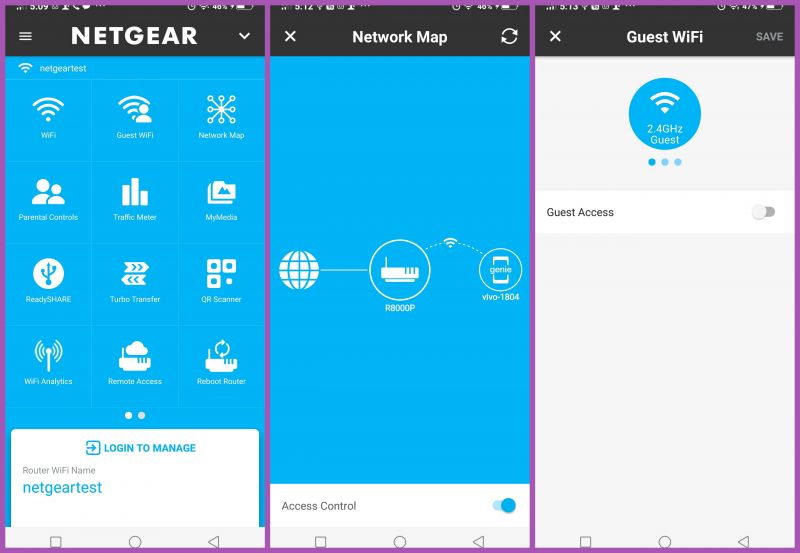 For Rs 12,999, Nighthawk AC3200 router seems steeply-priced at first glance. However, you do get a lot of features for the price, especially a super fast and robust tri-band network with intelligent resources allocation, and a networked media server and print server thrown in. While the router is best used for large homes, SMEs and startups can tap into the features and take full advantage of the services it can offer. We recommend this router for those who are looking for a wireless router that can perform well and distribute the internet intelligently and efficiently.