The new sensor collects sweat, measures its molecular constituents, such as chloride ions and glucose. 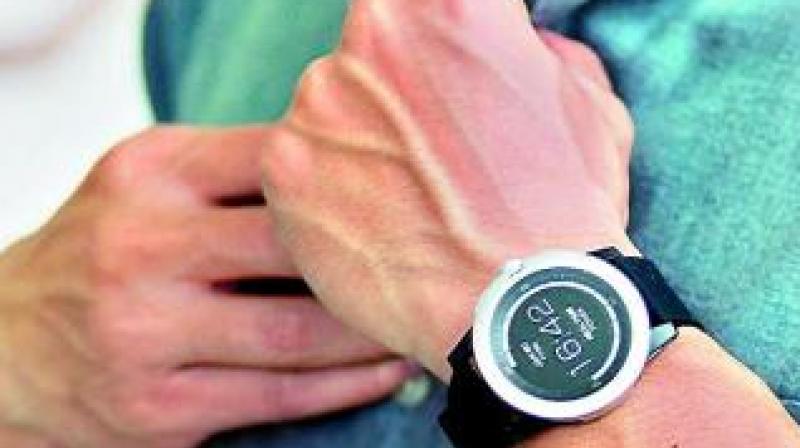 Unlike old-fashioned sweat collectors, the new device does not require patients to sit still for a long time while sweat accumulates in the collectors. (Representational image)

Stanford scientists have developed anew wristband-type wearable device that can analyse sweat to diagnose and monitor diseases like diabetes and cystic fibrosis.

The new sensor collects sweat, measures its molecular constituents, such as chloride ions and glucose and then transmits the results for analysis and diagnostics.

Unlike old-fashioned sweat collectors, the new device does not require patients to sit still for a long time while sweat accumulates in the collectors. The two-part system of flexible sensors and microprocessors sticks to the skin, stimulates the sweat glands and then detects the presence of different molecules and ions based on their electrical signals.

The more chloride in the sweat, for example, the more electrical voltage is generated at the sensor's surface. The team at Stanford University in the US used the wearable sweat sensor in separate studies to detect chloride ion levels - high levels are an indicator of cystic fibrosis - and to compare levels of glucose in sweat to that in blood.

High blood glucose levels can indicate diabetes. Conventional methods for diagnosing cystic fibrosis – a genetic disease that causes mucus to build up in the lungs, pancreas and other organs - require that patients visit a specialised centre and sit still while electrodes stimulate sweat glands in their skin to provide sweat for the test.

Children have to sit still for 30 minutes while an instrument attached to their skin collects sweat. By comparison, the wearable sweat sensor stimulates the skin to produce minute amounts of sweat, quickly evaluates the contents and beams the data by way of a cellphone to a server that can analyse the results.

People living in remote villages in developing countries, where conventional testing is unavailable, could also benefit from a portable, self-contained sweat sensor, he said.

The wearable device is robust and can be run with a smartphone, which can send measurements to a cloud and receive a result right back after review at a specialised centre.

Researchers also measured glucose levels in sweat, which correspond to blood glucose levels, making the device potentially useful for monitoring pre-diabetes and diabetes. However, the technology can also be used to measure other molecular constituents of sweat, such as sodium and potassium ions and lactate. The platform can be used to measure virtually anything found in sweat.

"Sweat is hugely amenable to wearable applications and a rich source of information," said Ronald Davis, professor at Stanford.

A wearable sweat sensor allows for frequent monitoring to see how patients respond to a treatment or if they are complying with treatment, said Carlos Milla, associate professor at Stanford.