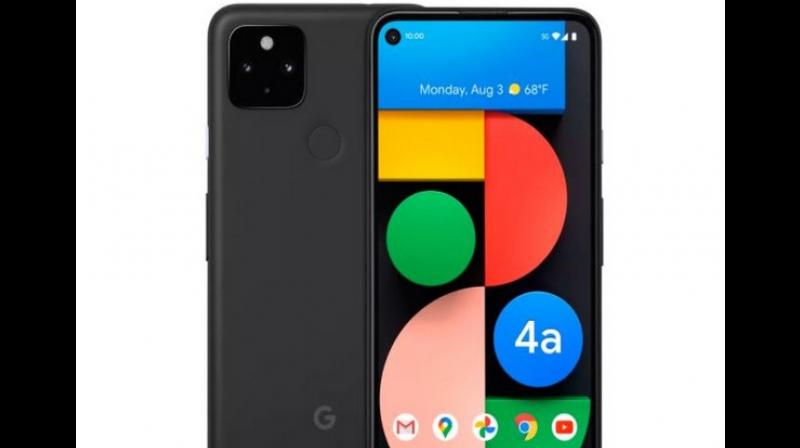 The battery has also been increased to 4,680mAh, up from 3,885mAh, which Google said will last through a full day of typical use or two days using Extreme Battery Saver mode. (ANI Photo)

Washington: American tech giant Google has officially revealed the Pixel 5A 5G, a phone it kind of announced in April to contradict rumours that it had been canceled.

According to The Verge, it comes with a small list of updated features compared to its 4A 5G predecessor, including a slightly bigger screen, a much bigger battery, and an IP67 rating for water resistance.

Though they might be few, these are some important tweaks to an already good midrange phone, and the best part is that the price has gotten smaller. In the US it will cost USD 449 (roughly Rs 33,000), which is USD 50 less than the Pixel 4A 5G's introductory price. The 5A will go on sale in the US and Japan on August 26.

The battery has also been increased to 4,680mAh, up from 3,885mAh, which Google said will last through a full day of typical use or two days using Extreme Battery Saver mode.

The 5A is also the first A-series Pixel to get an official water resistance rating. With IP67 protection, the phone will be able to withstand immersion in up to three feet of water for up to 30 minutes. That's an uncommon feature in the sub USD 500 class where IP ratings are scarce.

The Pixel 5A will continue to offer support for sub-6GHz 5G. Unlike last year, Google will not sell a mmWave-compatible version of the phone. That's no great loss -- mmWave 5G is very fast, but the range is highly limited and hard to find.

As per The Verge, unfortunately, the 5A also doesn't have support for C-band 5G frequencies, which some network services globally will start using at the end of this year to bolster their struggling 5G networks. Google has said it could add the necessary software support later but won't commit to doing so at this point.

Other specs remain unchanged from the previous model. It still uses a Snapdragon 765G chipset with 6GB of RAM and 128GB of storage. The 12.2-megapixel main and 16-megapixel ultrawide rear cameras and 8-megapixel front camera are the same.

There's a rear fingerprint scanner for biometric unlock, a headphone jack, and an 18W charger included in the box, though Google has stated that this will be the last Pixel phone to offer one.

The phone will ship with Android 11 and guarantees Google's standard three years of OS platform updates and security patch support.