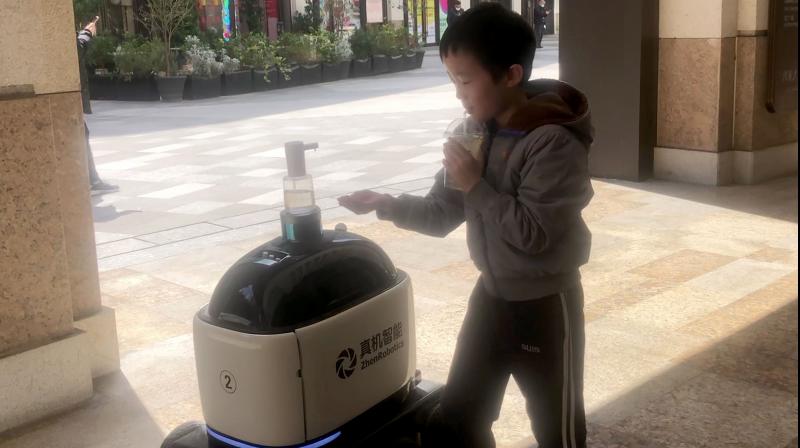 In this March 16, 2020, image made from video, a boy takes hand sanitizer from a ZhenRobotics robot as it patrols a plaza in Shanghai. (Photo | AP)

Liu, CEO of ZhenRobotics Corp., is among millions of entrepreneurs who are gradually getting back to work after China declared victory over the coronavirus that shut down the world's second-largest economy.

Unlike airlines, hotels and other industries that face a long and uncertain struggle to recover, Liu said his orders have tripled since the outbreak began.

“The epidemic made people aware of the fragility of human beings,” Liu said.

“Robots can make up for this vulnerability and provide services people can trust,” he said. “Trust in robots has been enhanced dramatically.”

Robots for use in factories and consumer industries are near the top of the ruling Communist Party's wish list for technology development.

Chinese leaders see them as a profitable export and a way to make up for a shrinking workforce as the population ages.

Beijing has spent heavily to set up robotics departments at universities and research institutes. Private sector developers can apply for research grants and other support.

ZhenRobotics, founded in 2016, does its research and development in the Chinese capital's Zhongguancun university district, a hub for tech companies. Liu said the company gets a break on rent and other official support.

Its researchers are working on technologies including machine learning, computer vision and autonomous navigation, according to Liu.

ZhenRobotics has a testing center in the southeastern province of Zhejiang, south of Shanghai. Manufacturing is in Shenzhen, adjacent to Hong Kong.

One of its robots patrols Shanghai's Taikoo Hui shopping mall. It can spot customers with bare faces and remind them to put on a mask. It gives out hand sanitizer and broadcasts anti-virus information.

The RoboPony has been used by Suning.com Group Ltd., one of China's biggest retailers, to delivery food and other necessities to households during the outbreak.

Demand for e-commerce soared after the government cut most access to cities with a total of 60 million people in late January. Hundreds of millions more in other areas were to told stay home whenever possible.

The Beijing city government gave ZhenRobotics a marketing boost by including it on an official list of “anti-epidemic new technology.”

The RoboPony, which is controlled through a mobile phone app, can carry 40 kilograms (90 pounds) and travel at up to 10 kph (6 mph). Liu declined to say what the robot costs.

After shutting down for the Lunar New Year in January, Liu went back to work Jan. 26. Other employees started to return on Jan. 30.

All but two of the 50 employees were back by March 10, Liu said. The remaining two are working from home in Hubei province, where the coronavirus emerged in December and travel curbs still are in effect.

Liu plans to step up research into disinfection by ultraviolet light and other possible hygiene-related features.

The company plans to produce 90 robots in the next six weeks, Liu said.

“We placed a large number of orders for our suppliers,” he said.