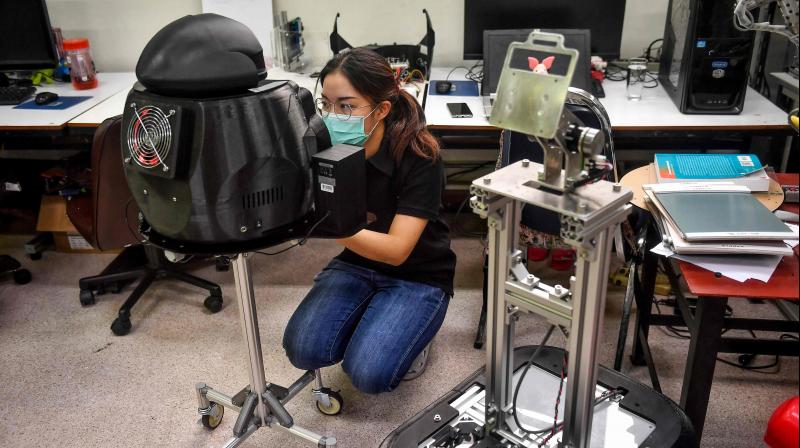 In this photo taken on March 18, 2020 engineering students configure a medical robot modified to screen and observe COVID-19 coronavirus patients at the Regional Center of Robotics Technology at Chulalongkorn University in Bangkok. (Photo | AFP)

Bangkok: Thai hospitals are deploying “ninja robots” to measure fevers and protect the health of overburdened medical workers on the frontlines of the coronavirus outbreak.

Built to monitor recovering stroke patients, the machines have been repurposed to help fight the disease, which has killed more than 11,000 people around the world.

They help staff at four hospitals in and around Bangkok to reduce their risk of infection by allowing doctors and nurses to speak to patients over a video link.

“They can stand outside the room and communicate with patients inside through the robot,” said Viboon Sangveraphunsiri of Chulalongkorn University.

Later models will be designed to bring food and medicine to patients, and could eventually be used to disinfect hospital wards, Viboon said.

His engineering team is racing to build more ninjas — known as such because of their matte black exterior—for another 10 hospitals around the country.

Thailand has more than 400 confirmed COVID-19 infections, including at least one death. More than 40 have recovered and been discharged from hospital. Authorities recently ordered the closure of bars, massage parlours and entertainment venues to help prevent new cases.

Meanwhile in Singapore, where the first two deaths due to coronavirus were reported on Friday, a new mobile application called TraceTogether was launched the same day to aid in contact tracing efforts.

The app works by sending Bluetooth signals between phones within close proximity of 2 metres to detect other users of the app. Users then send this data, which the app stores locally, to the health ministry when requested.

From this data, the ministry’s tech experts can map all the people whom a person testing positive for the SARS-CoV2 virus has been in close physical contact with.

Use of the app, which was developed by Singapore's Government Technology Agency (GovTech) and the country’s ministry of health, is voluntary. The government has not mandated the use of the app and relies on citizens to step up on their own to help with the contact tracing process.

The government also assured users that the data stored by the app would be encrypted and that it will not access any other information from the phone such as its location. “The engineering has preserved the privacy of the users from each other,” Janil Puthucheary, a senior minister of state was quoted as saying by Reuters.

Singapore been lauded globally for its quick and meticulous approach to tackling the outbreak.  Likely carriers of the contagion are also being tracked down using the police and security cameras.