Apple's Smart Battery Cases for the iPhone 11 series are here!

Apple has launched its smart battery cases for its latest iPhone 11, Pro and Pro Max models that were launched this year. 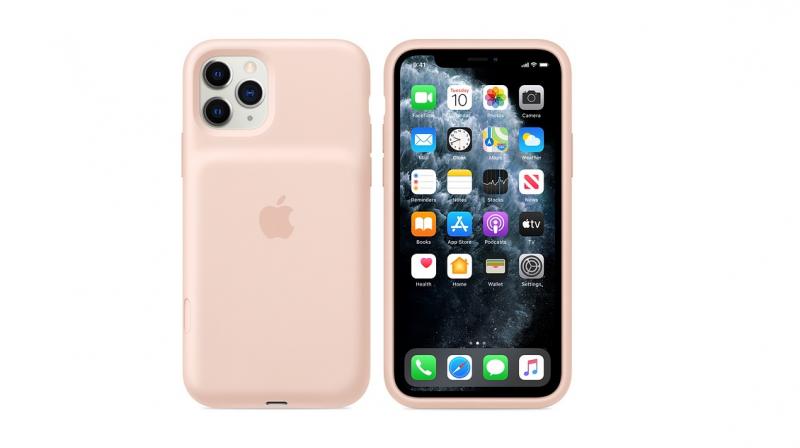 Available in colours black, white and pink sand (Unavailable for iPhone 11), it shall ship via ground to buyers within a day.

Apple has launched its smart battery cases for its latest iPhone 11, Pro, and Pro Max models that were launched this year. Equipped fully, with wireless charging support, 3 different colours, and even the broader camera opening, the case will retail for USD 129 which roughly converts to Rs 9,200 for the Indian fanatics (although, prices in India or talk of the India launch is not known yet).

However, what’s different with these is that the cases promise over 50 per cent more battery life as per Apple's tests and will also feature a separate camera button on them. Apple has explained that the 50 per cent increase claim. It has said, “Testing conducted by Apple in October 2019 using pre-production iPhone 11 Pro units and software paired with preproduction iPhone 11 Pro Smart Battery Case units and software. Video tests consisted of repeated playback of a 2-hour 23-minute movie purchased from the iTunes Store.”

It must also be noted that the latest series of iPhones, at least the Pro and above, have anyway been known to provide some of the longest battery life yet.

Meanwhile, the new button will let users directly open up the respective model’s phone. This can further be used to click pictures, after a short press or shoot QuickTake videos, after a long press.

Meanwhile, in terms of basic functionalities, the case will have a microfiber lining on the inside for the phone and silicone case with a soft finish on the outside, as per Apple, for handling. Available in colours black, white and pink sand (Unavailable for iPhone 11), it shall ship via ground to buyers within a day. 'Ground' is the keyword here, international shipping would be subject to that.

The accessories the phone is to support would include EarPods with Lightning Connector or even the Lightning Digital AV Adapter that’s sold separately. Apple has said that it shall charge faster with USB-PD compatible chargers.