Infinix Band 5 review- A rusty knife in a gunfight

The band mainly suffers for not offering a touch-enabled screen, opting for a single capacitive button instead. 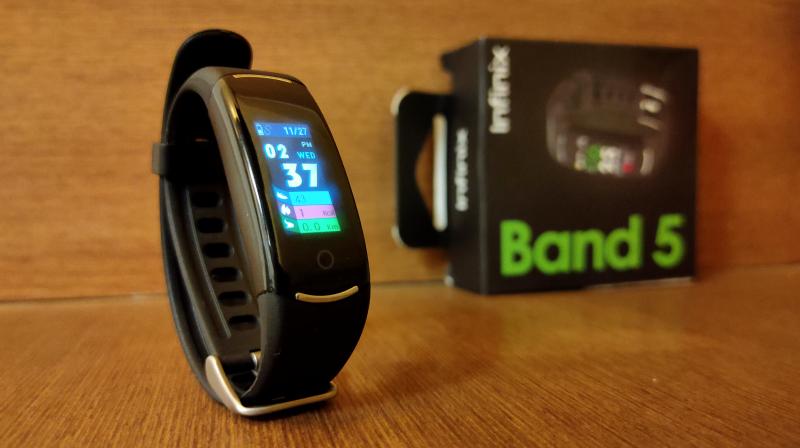 The fact that the Infinix Band 5 is priced at Rs 1,799 puts it very low on the value-for-money scale.
Rating:

Infinix is a brand we usually connect with smartphones. The company is known for its well-built affordable smartphones, most of which offer terrific value for money under the Rs 10,000 price mark. However, like most tech companies, the Hong Kong-based brand has its hands in accessories and wearables too, which brings us to today’s product for review – The Infinix Band 5.

The Infinix Band 5 is one in a recent list of many smart bands and fitness-oriented wearables that have made an impact in the last year in competitive markets like India. The band takes on dozens of competitors in the segment. Does it survive the peer-pressure and stand out? Let’s find out.

The Infinix Band 5 is a good looking device in the first glance. The 0.93-inch colour screen here is not AMOLED but an IPS unit. Mind you the screen itself isn’t touch-enabled and all navigation is done through the single capacitive button below the screen. This is marked with a small circle on it. There are silver accents above and below the screen area on the face that give it a nice touch. The band also has a proper watch buckle-style TPU strap and not the push-in style straps we see on most of the budget style fitness trackers. These straps will take a tad bit longer to fasten but ensure a good grip that does not come off accidentally unless you remove it. 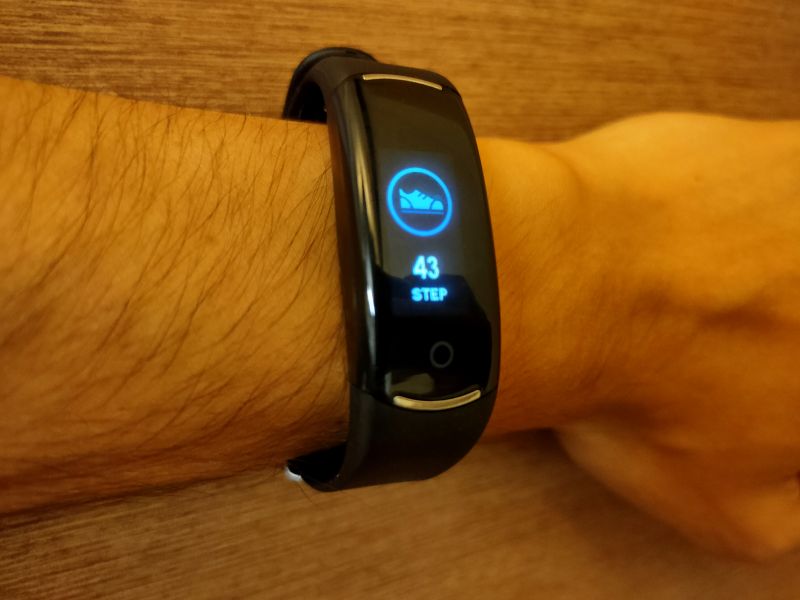 Under the device's screen is the heart-rate sensor along with the branding and model number of the device. That’s pretty much it when it comes to the design. The Infinix Band 5 charges via a male USB connector which is revealed when you pull off the top strap from the device. The negative aspect of this is the time and strength it takes to get the strap off to reveal the USB, which you think you will break almost all the time before it just opens. 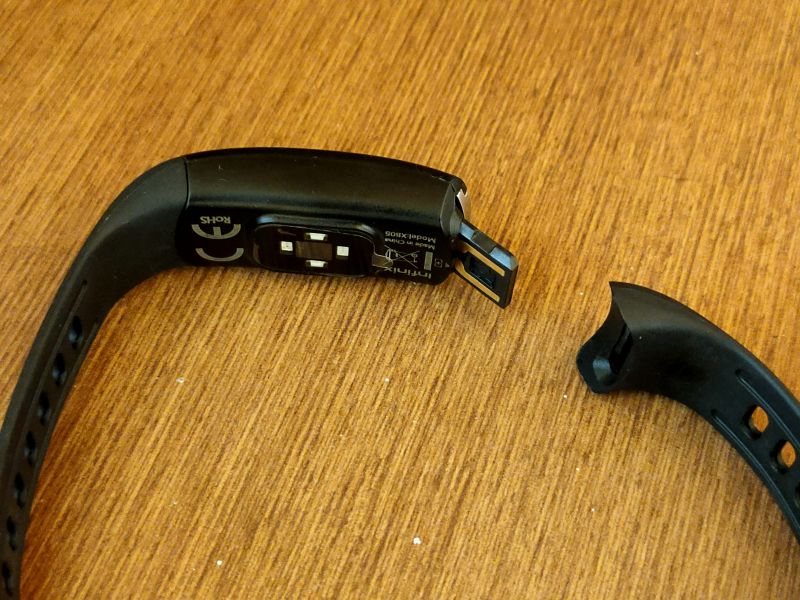 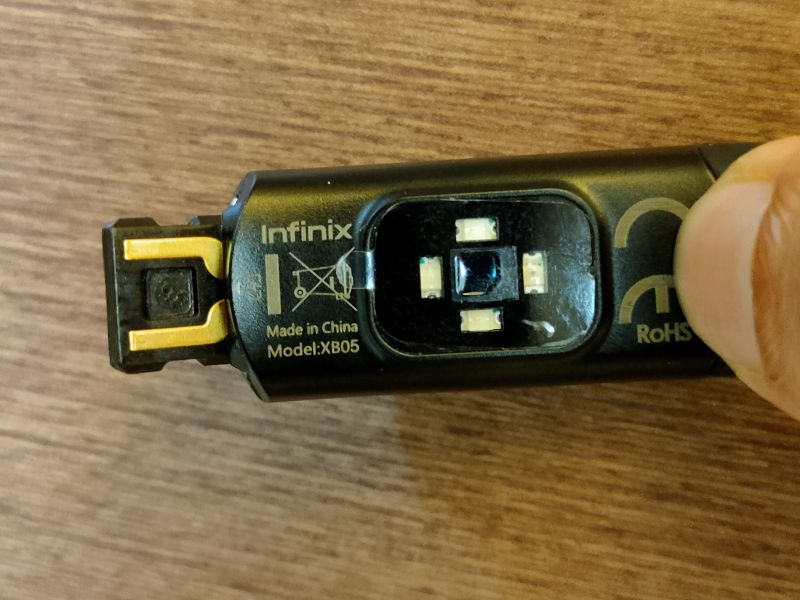 The bright side of it is the fact that you can just carry the band and go wherever since it has no magnetic charging points like the Mi Band 4. It has no separate charging dock either that needs to be carried around with the device. Also charging it is pretty easy as you can get power into its USB charging input through a power socket, a computer, a laptop, a power bank, or even reverse charge it directly from a supporting phone. This gives the USB approach an unmatched sense of freedom, from extra accessories.

The Infinix Band 5 comes with the DA14585 CPU and weighs 23 grams. The Lithium Polymer battery inside the device charges at 3.7V. The device also comes with IP67 protection which makes it resistant to elements like dust and survivable in up to one meter of water for 30 minutes.

The Infinix Band 5 has a very simple to use interface that is quite similar to what all fitness trackers have. An elongated screen brings all pages in one vertically scrollable screen. This includes your main watch dial, and pages for counting steps, distance, calories burnt, heart-rate, various training modes, a message menu, and the band’s settings.

Since the screen of the band doesn’t take touch inputs at all, the only way to navigate through the interface is by using the only button below the screen. Items can be uni-directionally cycled to through by tapping the button and selected by long-pressing the same. Once you have entered any sub-category, the only way out is to again cycle your way through multiple taps. 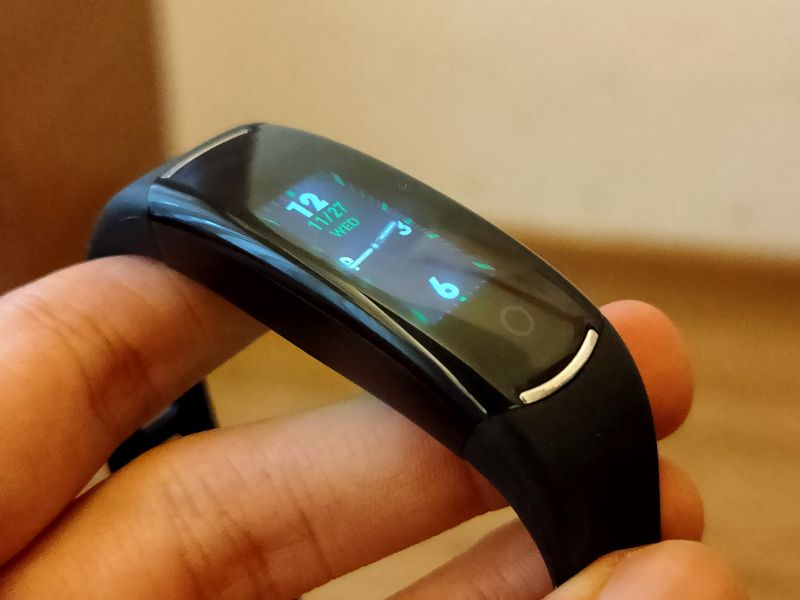 We found this to be a very out-dated way for navigation, and the approach is ridiculously tiresome in this age where even bands that do not have a colour screen have touch input. A touch-enabled screen would have enabled bi-directional navigation throughout the interface and would have also added support for gestures to say, go back or turn off the screen. The tap and press interface alone made us burn a few calories we’d say.

The Infinix Band 5 comes with all the standard features you would expect from a fitness tracker. Once you pair it with the Infinix Life 2.0 app, it counts your steps, measures your heart rate and does both pretty accurately. If you have location turned on in the companion phone, the band will also track the distance you have covered. Using these data elements along with a few basic data entries that you fill in when you first set up the companion app, the band also analyses an estimate of how many calories you have burnt in your regime. 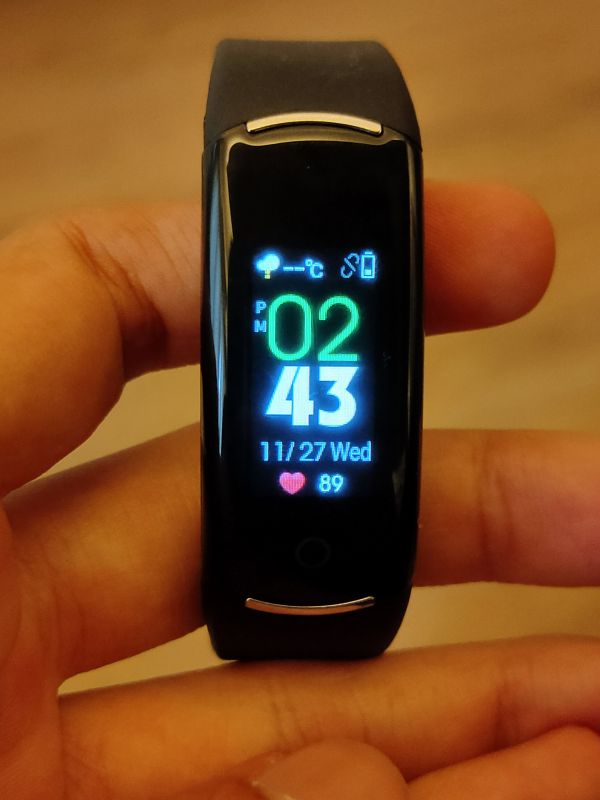 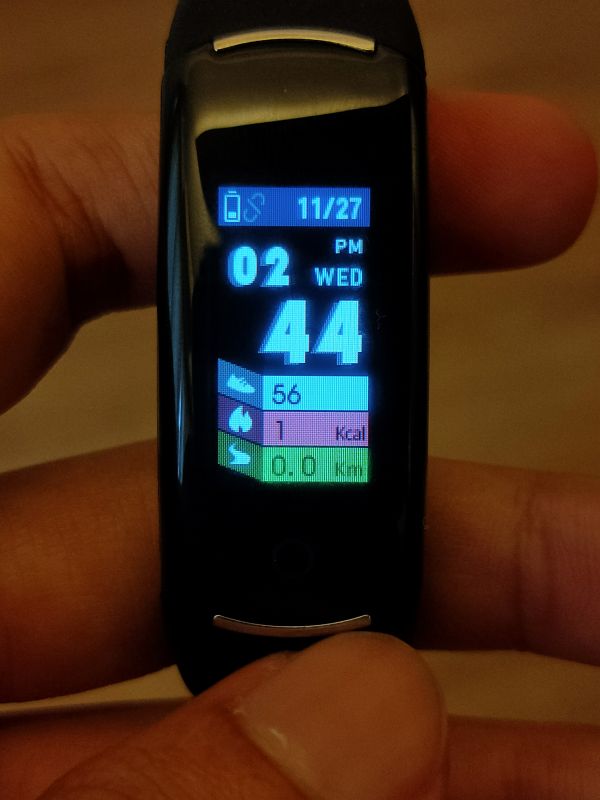 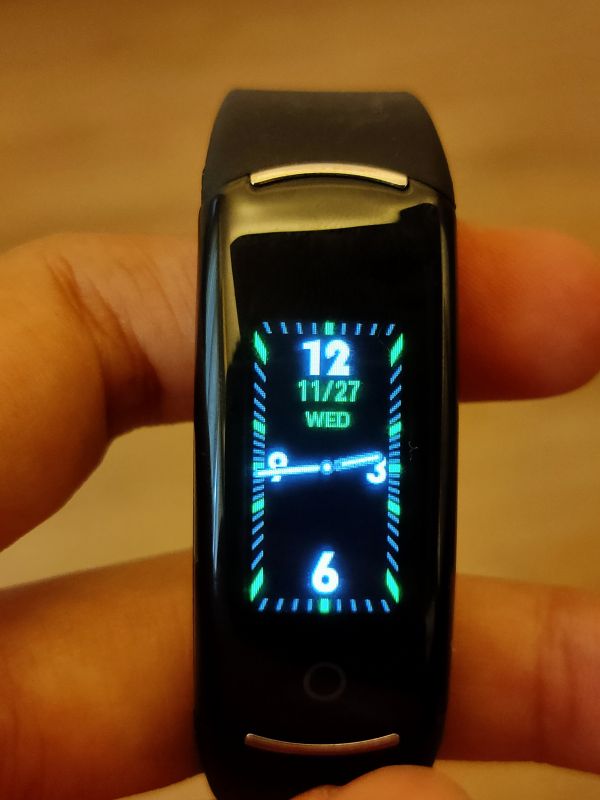 The 3 watch faces available on the Infinix Band 5.

There are some dedicated training modes for walking, running, cycling and skipping, which when enabled will track your data for each of the respective sports, including heart-rate and burn calories. A neat feature also allows you to shake the band on your hand to take a picture from the phone remotely, but this again has to be through a built-in camera app in the companion app.

Beyond this, the band doesn’t do much. You get notified for calls (which can only be denied) and texts (which cannot be replied to), but that’s about it. There is not much customising either, with the only available options being three main watch faces that you can choose from. One is an analogue one, one is digital, and a third face is also digital but shows most of the useful information right on the main screen.

The Battery life remains the only element of the Infinix Band 5 that at least counts as decent by 2019 standards. The battery life of the device is great but we believe a large fraction of the credit goes to the lack of a touch input panel. Regardless, the band can last for long, and a single charge will make it go on for 7 days on moderate use, and it has a standby time of 20 days.

The Infinix Band 5 is a disappointing device. While it isn’t that bad on the features and specifications front, the band mainly suffers for not offering one key offering compared to other bands in the segment—A touch-enabled display panel. The fact that the band is priced at Rs 1,799 further puts it down on the value-for-money scale.

We strongly suggest you skip the Infinix Band 5 and hunt the market for other popular fitness bands in the price segment that offer a usable touch screen, and hence, more functionality.