Asus ZenBook 15 UX534 review- A laptop from the future

Great specs, 3D IR Face recognition, tiny bezels, Military-grade build and a secondary screen; the Asus UX534 has it all. 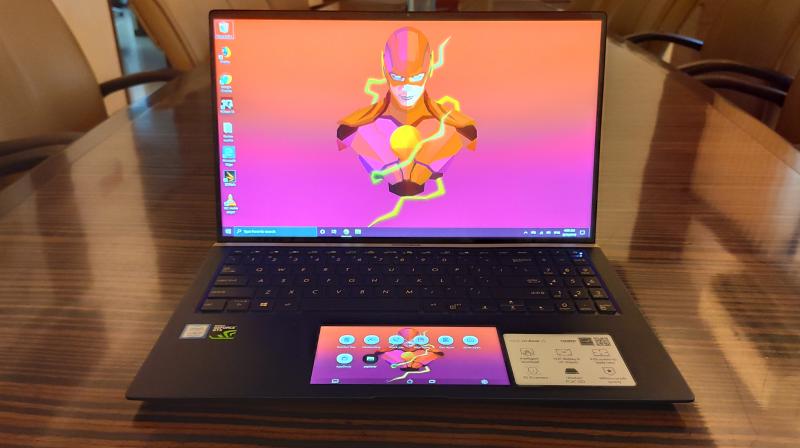 The Asus ZenBook UX534 fits a 15.6-inch screen in a 14-inch chassis, making it one of the world's smallest 15-inch laptops.
Rating:

Laptops, unfortunately, haven't had the same level of innovation over the years compared to smartphones, or even tablets. While phones have moved on from being simple touchscreen devices to pieces of technology that feature multiple cameras, bendable screens, moving camera parts and what not, laptops were, well, still laptops. Newer innovations in laptop systems would usually be under the hood- more RAM, newer processors, generous graphics, innovative cooling solutions and better battery were pretty much all the innovations we had seen in almost a decade, the only exception being perhaps a generation of laptops that could swivel out a full 360 degrees and turn into tablets with the touch screens that they used.

However the drought in design innovation for everyone's favourite "lappies" is coming to an end and the new Asus ZenBook series is a prime example of just that. The ZenBook 15 UX534 we have today, is an ordinary-looking laptop until you open it and that's where you notice what's different about this bad boy. The device features a great spec sheet, 3D IR Face Recognition, a touchpad that doubles up as a touch-enabled secondary screen, military-grade sturdiness, and if that's not enough, it also has bezels small enough to make it one of the world's smallest 15-inch laptop right now.

Here's a deep dive into this masterpiece where we explain what makes it so great.

The Asus ZenBook 15 manages to hit that sweet spot between looking great in both casual and professional environments. The laptop simply exudes cool. It comes in a compact 14-inch chassis but thanks to the super-thin NanoEdge bezels, the brand has near-magically managed to fit a 15.6-inch screen here, which is the biggest win of this device when it comes to the build. It is also light at just 1.67 kgs. 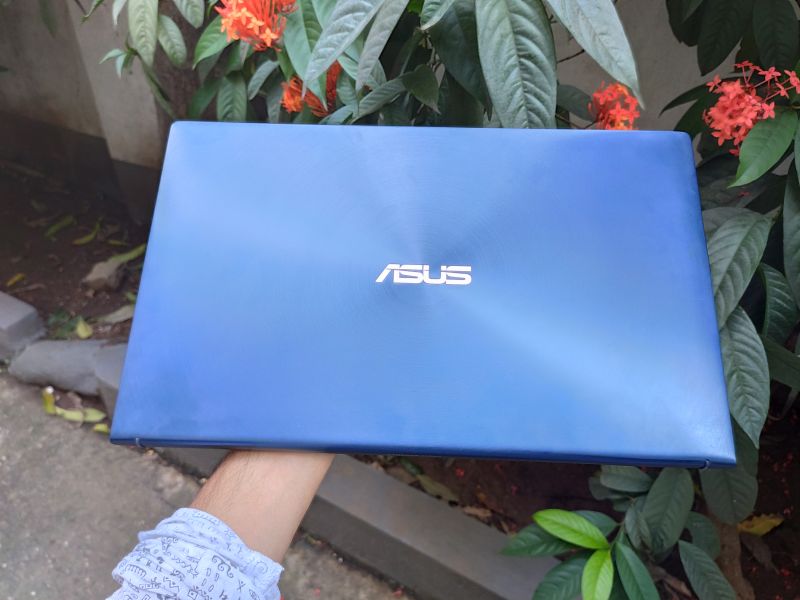 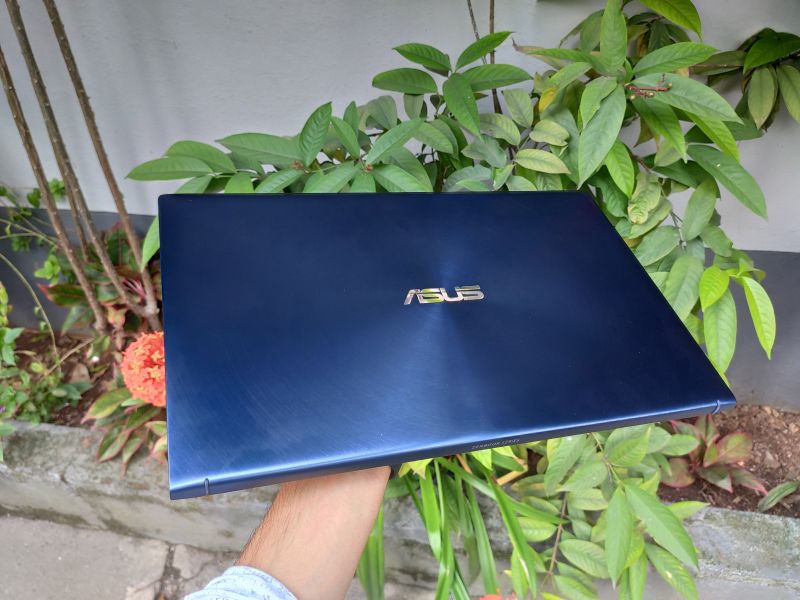 But that isn't all. The device looks super-classy with a matte blue finish with a concentric design on the lid, a feature that the ZenBooks are known for. The blue finish extends from the back of the lid all the way to the bottom of the laptop and the keyboard inside, making it feel like it’s been constructed out of a single piece of blue metal.

The only parts of the laptop that don't match the colour scheme are the two screens, one of which doubles up as the touchpad of the laptop. More on that later. 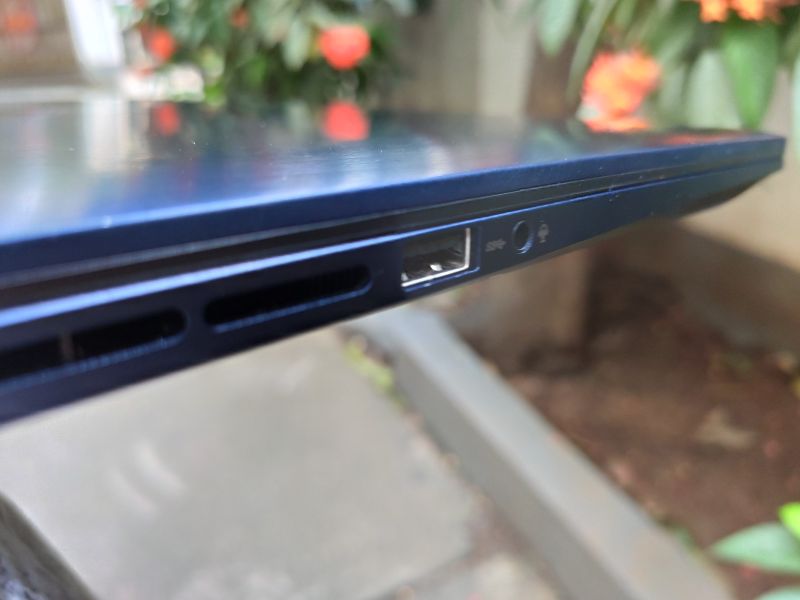 Along the left of the laptop are three air vents, a USB 3.0 port and a 3.5mm jack. On the right edge, you'll find the charging port, an HDMI port, a secondary USB port, a USB-C port that makes it future-proof, and the card-reader. There are two LEDs, one for charging and another for telling you what state the laptop is in (On/Off/Sleep). Above the screen, you will find a camera in the centre, with two IR sensors on either side that aid with the 3D Face recognition.

The laptop is MIL-STD-810G certified, meaning it can take the occasional beating provided by the elements on average usage. The hinge and keyboards are well-built with no creaking or wobbles. The sturdiness extends to the matte-finish lid which attracts the occasional fingerprints but is resistant to scratches. We expected no less in this high-end line of laptops by the brand and the build quality here doesn't disappoint.

The Asus ZenBook UX534 features a 1920 x 1080 display that is good enough for casual to professional use. This isn't the highest resolution panel out there, but then again that is a domain this particular model isn't focussing on. 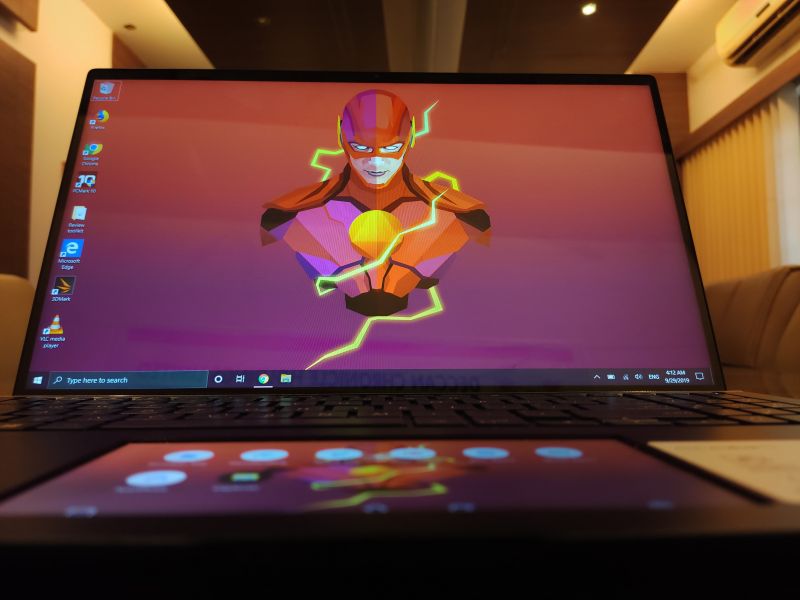 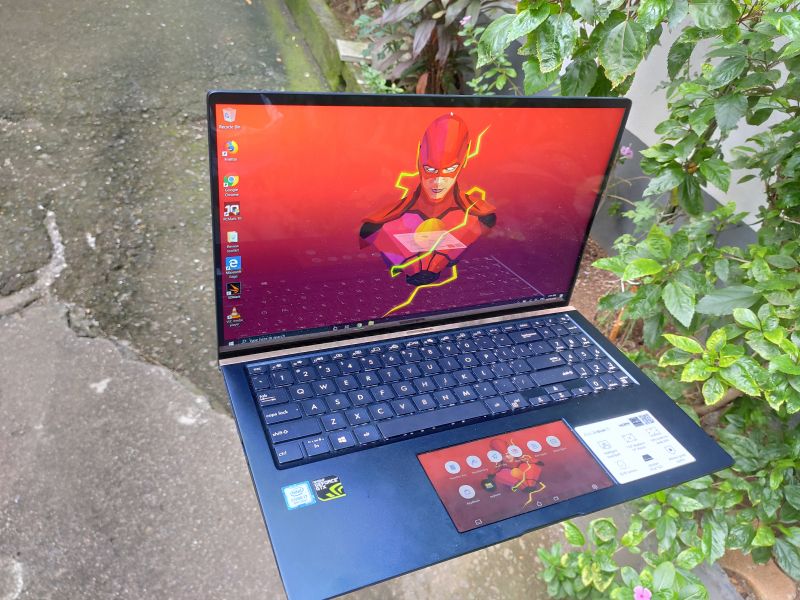 What you do get is a super-slim display panel and an insane 92 per cent screen-to-body ratio, a figure you'd usually associate with smartphones. The display gets decently vibrant and has pretty high brightness levels as well. The viewing angles here are good enough for you to forget you're looking at the screen from an angle.

The ScreenPad 2.0 sets the laptop apart from the competition and is the main highlight of the device. This Asus feature can be overwhelming to use at first, but you will quickly catch on the intuitive features it has. To help understand what this extra screen on the bottom can do, let us break it down in simpler parts.

The ScreenPad 2.0 tech basically means your touchpad transforms into a screen when you want. The secondary screen is basically a smartphone placed neatly where your touchpad was. The second screen is an extension of the main screen but also functions independently in some ways. 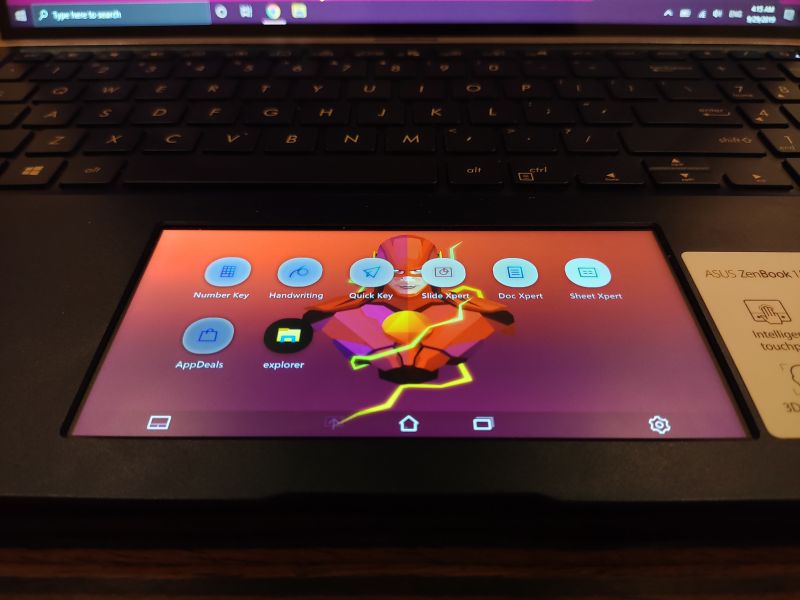 The 5.65-inch FHD+ (2160 x 1080) screen is operated by touches and support up to 4 fingers at a time. That’s right; it actually has a higher resolution than the main screen. You can set its brightness, refresh rate, turn on its battery saver mode, switch between two resolution options, and even change the wallpaper on it, all without affecting your main screen up top. 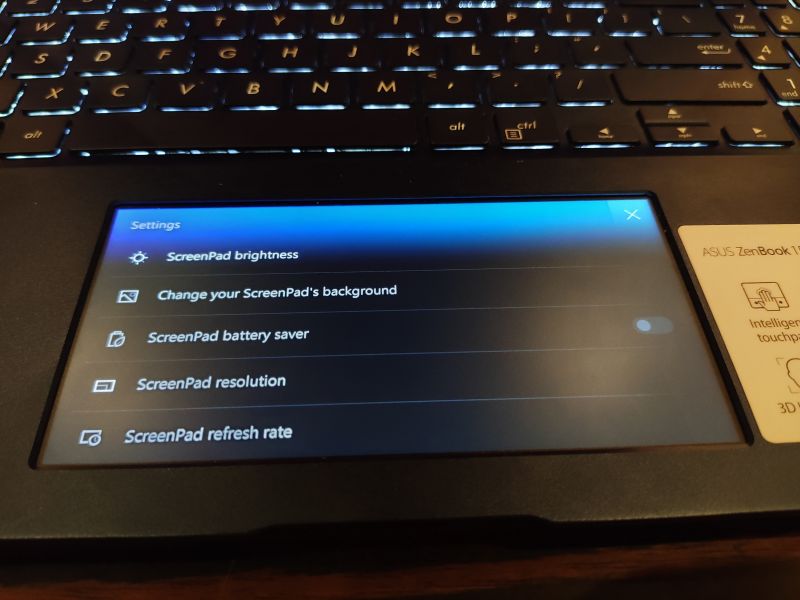 The interface has its very own taskbar with a home button, with a 'send-to-main-screen' button on the left and a recents menu switcher on the right. The far ends of the taskbar feature a touchpad enabler and a settings button. The home screen has quick shortcuts to some pre-selected apps and you can pin more apps here. Pinning apps to the ScreenPad allows you to quickly open the apps or programs, and whatever you open from pinned shortcuts will open up on the secondary screen.

What can it do?

We're glad you asked. The second screen offers quick shortcuts like a calculator, an accurate handwriting toggle that can send inputs in the form of entire sentences straight to the main screen, a 'quick-key' shortcut button where quick complex toggles like Ctrl+c, Ctrl+v, Ctrl+z, Win+i, etc can be opened up like Piano keys where you can trigger these actions in one touch. 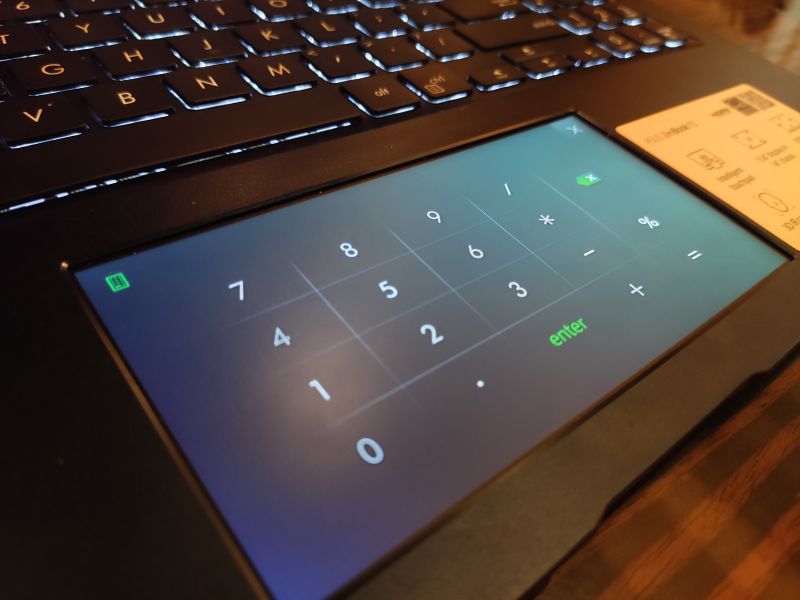 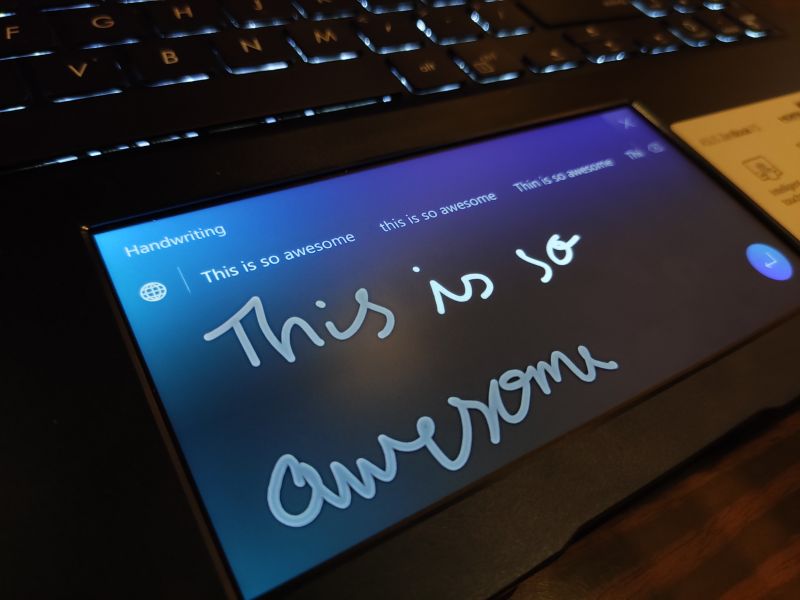 But that's just the beginning. The second screen can open up and run pretty much everything that your primary screen can, while the primary screen has other stuff open. So you basically get two screens, a main primary one and a secondary one you can use for quick operations. Open up a folder on it, a movie, a separate browser window, the possibilities here are endless. It basically is a second screen to your laptop that exists in the same amount of space.

How do you do that?

It’s easy, you toggle between a regular touchpad mode and the ScreenPad mode by pressing the F6 key. Once you’re in the ScreenPad mode for the first time, a tutorial lays everything out in steps for you so you can grasp it all quickly. While you will need some time to make the full use of the second screen, once you get it right, you’ll be flying through programs, multi-tasking like a boss.

Being a high-end choice, the Asus ZenBook UX534 features a full keyboard layout with a numeric keypad on the right. The keys are built rock solid and key-travel is 1.4mm which means fewer typos. The small press of the keys inside will help you attain blazing fast typing speeds once your hands get used to the keyboard. 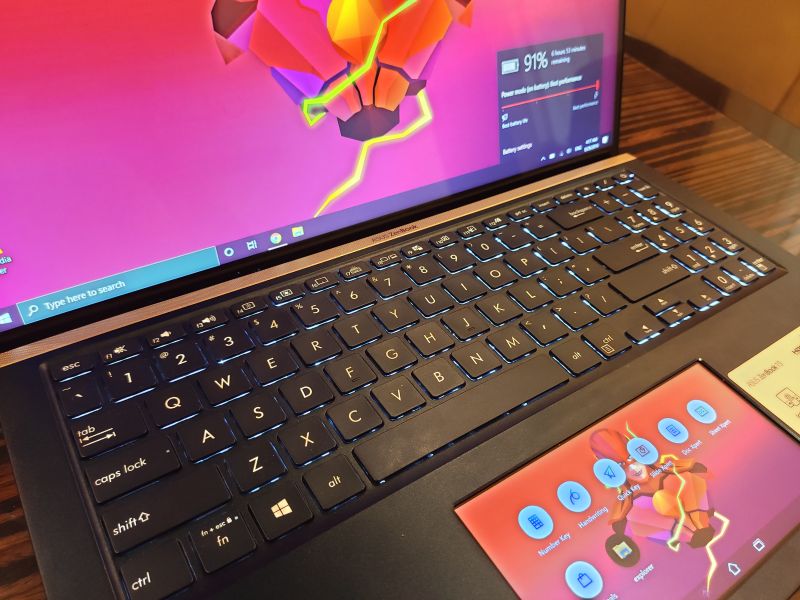 The top row of the keyboard features what the company calls Evolved Hotkeys. The Function keys (F1 to F12) have been allowed quick secondary functions. These include taking a screenshot, locking the laptop, disabling the camera and more, which can all be done with one tap.

This interesting feature allows the allocated secondary functions of the Function Keys (F1-F12) to act as the primary functions if you choose to do so. For example, pressing F5 will increase the screen brightness rather than refresh the screen, which is usually the primary function. However, if you do not like this feature, you can hit Fn+Esc to switch back to the regular mode where pressing the Function keys will execute their regular action and Fn+Function Keys will execute the secondary functions.

The keys here are also backlit in white and you can either set them to one of three brightness levels depending on what lighting conditions you are in or turned off when you don't need it.

The laptop is pretty good on the spec sheet. It’s powered by Intel’s core i7 8th Gen with 16GB RAM and 4GB dedicated CPU memory. There’s also 1TB SSD storage, built-in Windows 10 Home and NVIDIA GeForce GTX1650 MAX-Q GDDR5 4GB VRAM for graphics. The performance output you get is good, but not the absolute best for the price you pay. Don’t get us wrong, the laptop will blaze through daily use, even with heavy tasks. We put the laptop through its paces, watching a Blu-Ray movie while software installed in the background along with a download going on Wi-Fi. The laptop didn’t break a sweat. 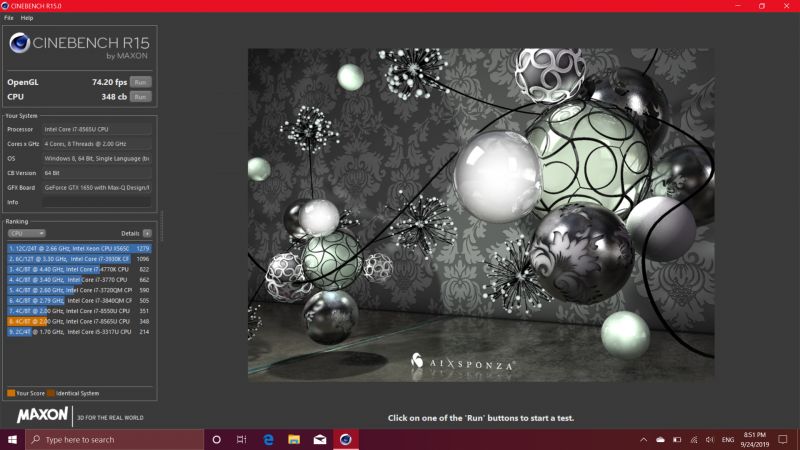 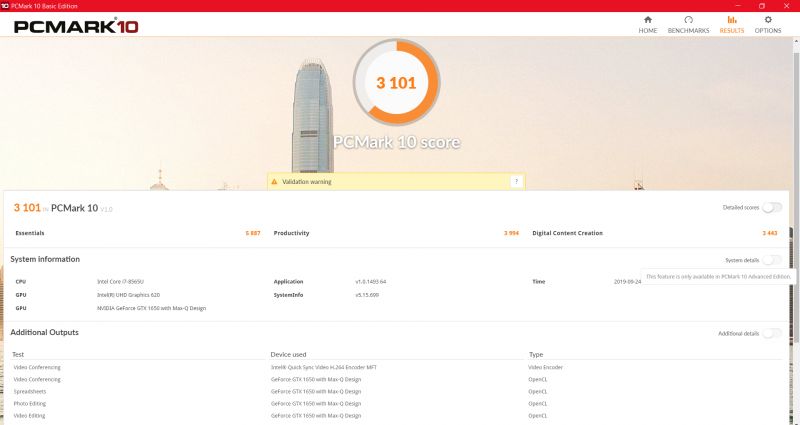 But that being said, the device doesn’t bag a monstrous benchmark score. The 16GB RAM used here is also LPDDR3 and not LPDDR4. While not slow in any way, there are better laptops out there that score more ‘raw performance’ points.

The Asus ZenBook UX534 comes with top of the line specs, so it wouldn’t be complete without a good battery to juice all the hardware up, including the second screen. There is a 71WHrs 8-cell lithium-polymer battery, that the company claims can power the UX534 for over 14.5 hours. We can back this up by saying battery life on the UX534 is excellent. You can easily go through hours of work or media without worrying about the laptop dying on you halfway through. 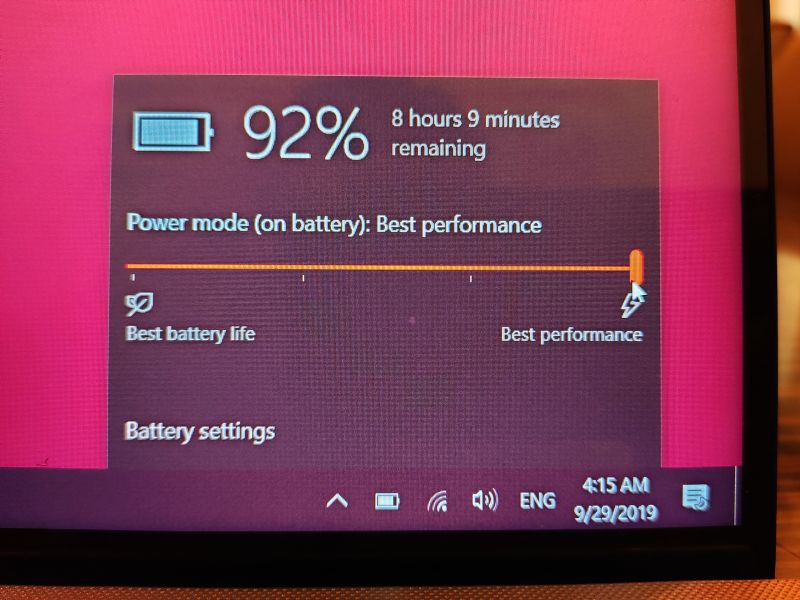 With the windows battery-saver turned on, it gets unreal. We started watching a 3-hour movie at around 80-90 per cent with battery saver turned on, and when the movie was done, we still had over 9 hours of screen-time left. That’s a lot of juice.

We wouldn’t be exaggerating in calling the ZenBook UX534 a laptop from the future. It is a fantastic piece of technology in a compact form factor that doesn’t look out of place irrespective of where you open it up. It’s got both style and substance. Both come at a price though, as the laptop currently costs roughly Rs 1,23,000 in India.

If you’re spending that money for pure performance or gaming, the UX534 can do that, and do it well. But there are better options for the price. However, if you’re looking for a more balanced option, that combines power with good aesthetics, and cool features that are really useful, the Asus ZenBook UX534 is a solid option.