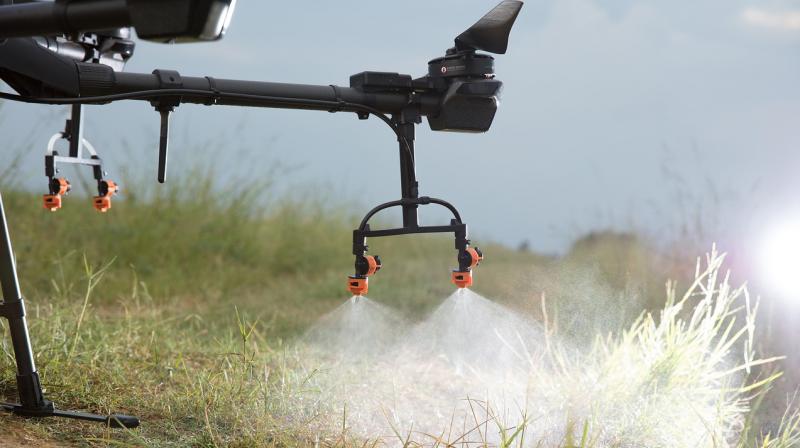 Drones have been in use in the agriculture for the spraying of pesticides. Similar drones will now be used for disinfecting cities. (Representative Image)

New Delhi: A group of students at the Indian Institute of Technology (IIT), Guwahati, has developed a drone with an automated sprayer to sanitise large areas including roads, parks and footpaths, to prevent the spread of coronavirus.

The student group, which has a start-up called "Racerfly", has approached the Assam and Uttarakhand governments offering to join the fight against the coronavirus pandemic with their sprayer system which they claim can accomplish a task in less than 15 minutes which would otherwise take a person 1.5 days of work.

In Tamil Nadu too, student engineers from Agni College of Technology and professionals from startup Garuda Aerospace fitted drones with disinfectant spraying mechanisms, which are now being used by the Chennai Corporation to sanitise large areas.

On March 23, a pilot operation was conducted to spray disinfectants in the area around Rajiv Gandhi Government General Hospital. Since then, Garuda Aerospace which has 300 drones has been getting enquiries from Uttar Pradesh, Odisha and Chhattisgarh among other states.

IIT Guwahati Civil engineering student Anant Mittal said their sprayer system can be deployed and operated by just one operator, eliminating the need for several cleaners manually spraying disinfectants. Also, these drones can be used to record videos.

“The drone which is crash proof, is equipped to adjust itself to terrain height and avoid obstacles,” Mittal said.

"The roads and areas can be selected on Google maps and the drone can be automated to perform the task within a signal range of 3 km. A drone can cover more than 1.2 hectare in one flight and more than 60 hectares a day," he added.

The five-member team said the drone can spray two to four litres of disinfectant per minute and can be filled twice for one charge.