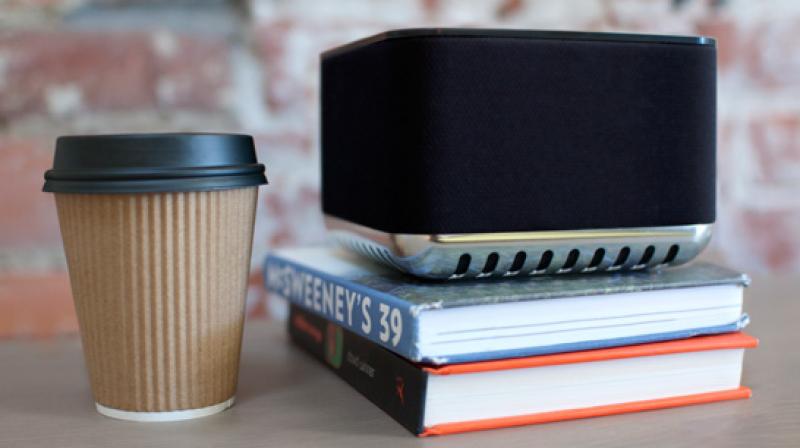 The Core measures just 6 inches in length and breadth and is just 4-inches tall with a weight of 1.5Kg.
Rating:

Wireless speakers are in abundance these days. Every tech company from China seems to be making one, and no doubt, they are doing great. With advancing technology and tech getting cheaper and better, there seems to be tough and healthy competition between brands out there. However, the most important factor when making an audio product, especially a speaker, is to know the physics behind the core element — air. When you manage to push air in the right proportion and direction, you can create audio that is pristine and music to the ears. So did the engineers at Mass Fidelity, a Canada-based company, manage to use their skills in tweaking the Core. 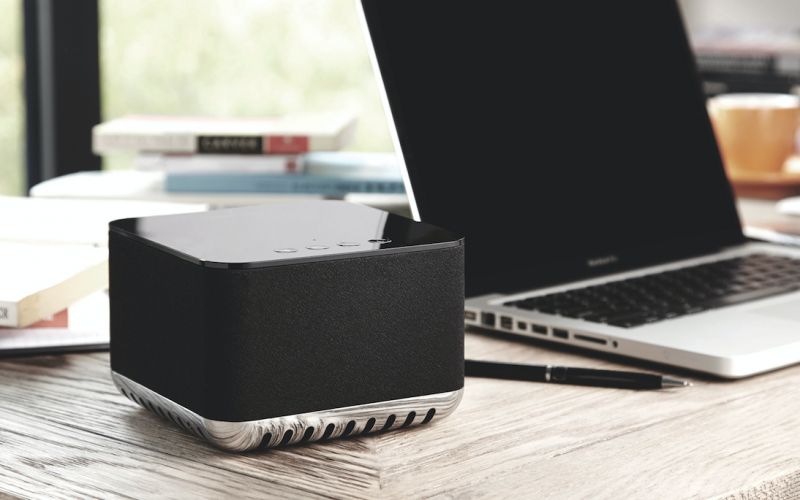 Core is a product from the stables at Mass Fidelity. As the name pronounces, Mass Fidelity is a startup that caters to audio products, with an aim to the masses, but with the quality for enthusiasts with one motto — functional design, revolutionary sound and freedom for the listener. Their first product, Core, has a rightly chosen name that spells as the core for the great audio performance that comes from a box that is as small as a lunch box. Core is a wireless speaker that runs on Bluetooth, can pair with multiple Cores around the house and can create a ‘hell-of-a-noise’ (pun intended). 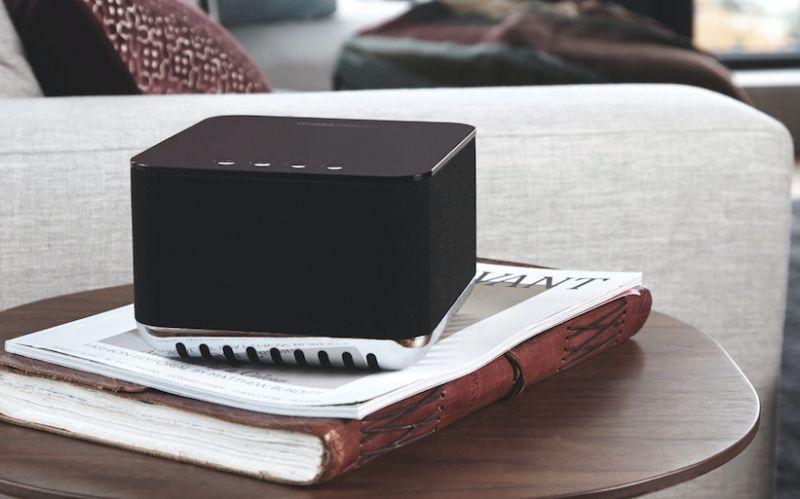 Core is a compact wireless speaker that produces pristine stereo music from a single unit itself. The company claims it is ‘better than stereo,’ and we would probably support that term too. It includes an impressive set of features which pronounce portability, multi-room functionality and crystal clear performance.  Core features a built-in adaptive wireless network that enables users to connect between two and eight units to create a multi-room system at home with the press of a single button – no wires or Wi-Fi required. With multiple inputs, Core allows for both digital and analog sources to be connected and also has a feature of an easy plug-in to the optical input. 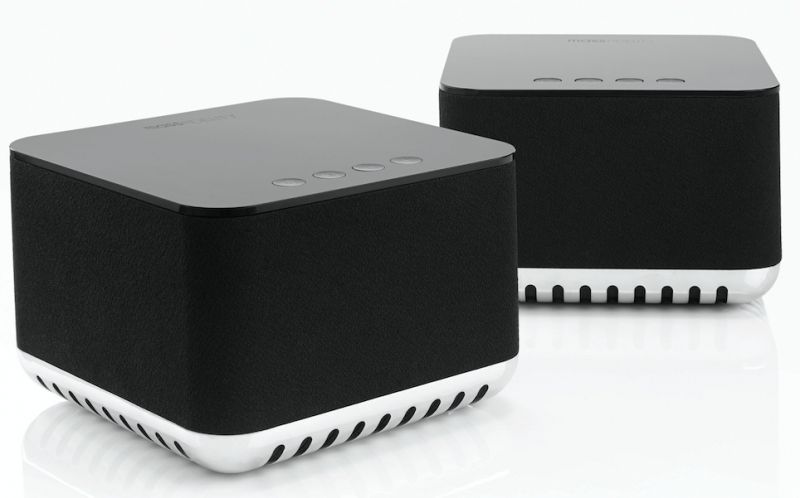 The Core measures just 6 inches in length and breadth and is just 4-inches tall with a weight of 1.5Kg. What impresses is that the tiny box holds five speakers or drivers and an amplifier that pumps out a whopping 120Watts in total. And what impresses us, even more, is that the tiny box has been cramped with a battery that can run the speakers for almost 12-hours on a full stomach, apart from also doubling up as a power bank to charge your smartphone or tablet. Surprisingly, it charges up to full tank in just 2 hours too. It is Bluetooth enabled (the usual 30ft range), NFC enabled for easy pairing, can pair up with almost eight more cores for a multi-room setup, and also has a possibility for IoT setups. Paired with a Subwoofer, the Core can create a miniature clubhouse at home. It sports inputs for aux, optical and control (IoT) apart from having a Subwoofer out port. Last but not least, the Bluetooth here has Qualcomm’s AptX support to ensure better audio transmission over the data channel. 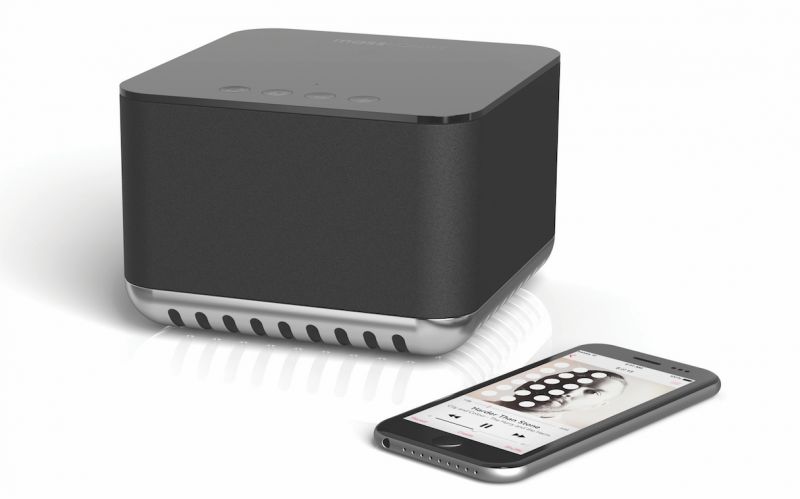 As for the build quality, the product is definitely built rock solid. It has a glossy acrylic top surface, a metal chassis and a chrome bottom that looks both simple and elegant. The grilles are covered with fabric and house a total of five custom designed high output speaker drivers, two up front, one on each side and a subwoofer which is downward facing. There is no bass reflex port here. The top surface incorporates an NFC chip in the centre for easy tap-and-connect for smartphones with NFC. Four buttons are available on top, two for volume, one for multi-room pairing and one for source selection. A simple multi-colour LED is also available for indicating a connection, source, power and charging. The rear panel is the business end and features a USB port for charging external devices, a power jack for the charger, a power button, S/PDIF optical and analog aux input. A subwoofer out and a control in for IoT smart home control is also available. Lastly, a small detachable card is also seen on the rear panel. This is the 5GHz wireless module for multi-room connectivity. Mass Fidelity has used 5GHz wireless networking for multi-room connectivity so that there is the least disturbance from other equipment that uses the 2.4GHz network. These include wireless routers, Bluetooth networks, Microwave ovens and other similar devices and peripherals within the house. Behind this card is a switch with channel numbers 1 2 3 and 4, that the user can select for pairing a group of speakers to each channel. 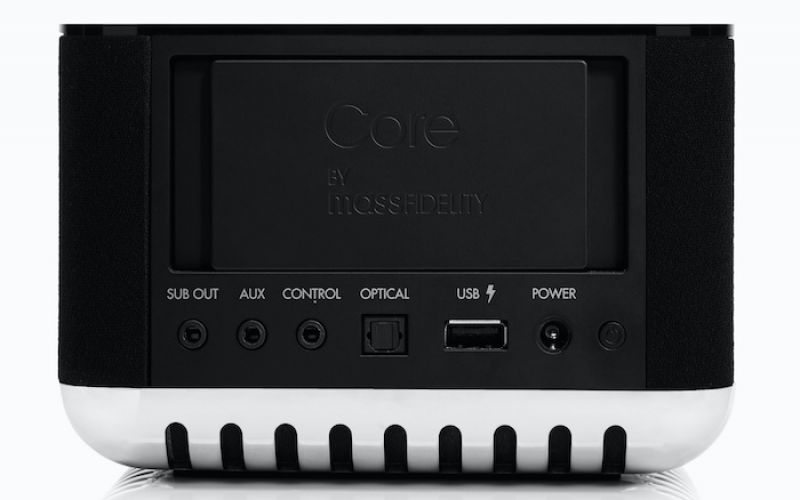 The Core also can be used as a handsfree for taking calls when connected to the smartphone. However, this is disabled by default and can be enabled by pushing the power and source buttons for a few seconds. Lastly, the Core can be controlled by an IR remote controller (bundled), which has the same buttons featured on the Core. However, the quality of the IR remote seems to be below average. The remote feels cheap to the touch. The same is the case with the quality of the cables and adapter bundled with the product. Compared to a product that will cost you Rs 33,999, the accessories with the product definitely need to be superior. 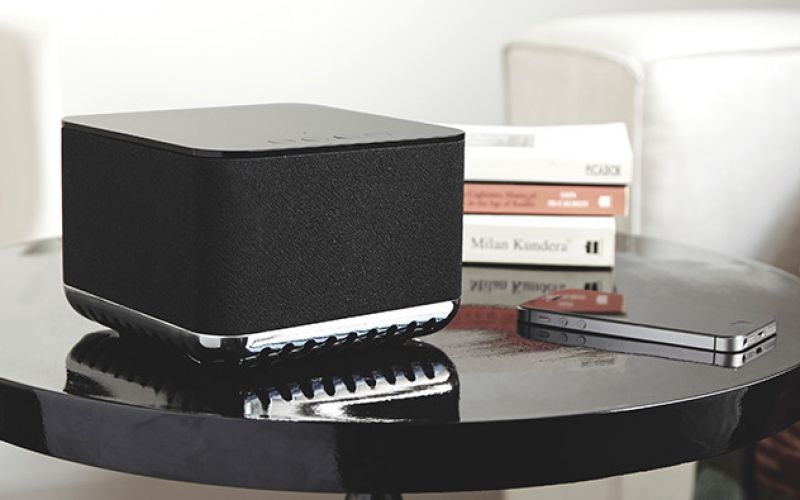 Core has the ability to produce acoustic holograms that can imitate or replicate what stereo speakers do. And trust us, the technology actually works and is not just a marketing gimmick. In case of physical stereo speakers, the two speakers (Left and Right channels) need to be placed apart from each other, thus eating up a valuable real estate in your living room. 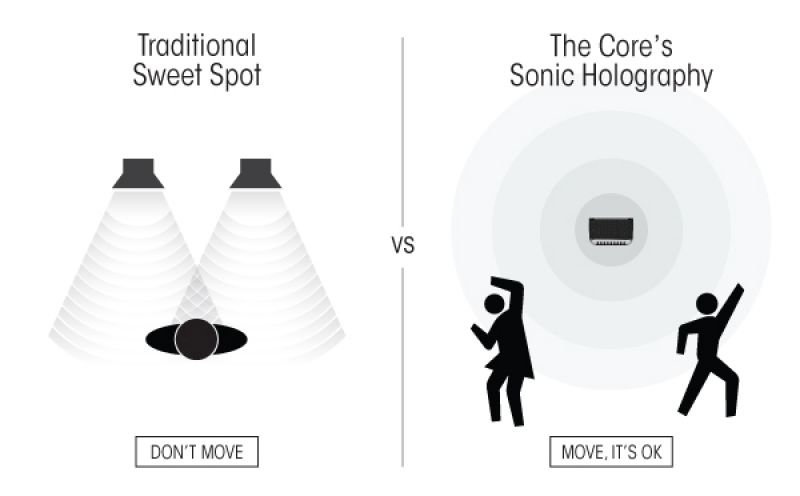 But in the case of Core, the acoustic hologram actually uses a technology to send the sound waves at a particular direction, behind the speaker itself that hits or reflects the wall and creates an imaginary stereo setup. This technology is called Wave Field Synthesis, where a set or group of speakers/drivers are clubbed together with a set of algorithms to bounce audio off neighbouring walls to create the stereo effect. Moreover, this effect is not directional or limited to distance. The listener can be in any part of the room and still experience pure stereo audio, unlike conventional stereo setups that need the user to be hearing it n a sweet spot between the two channels. 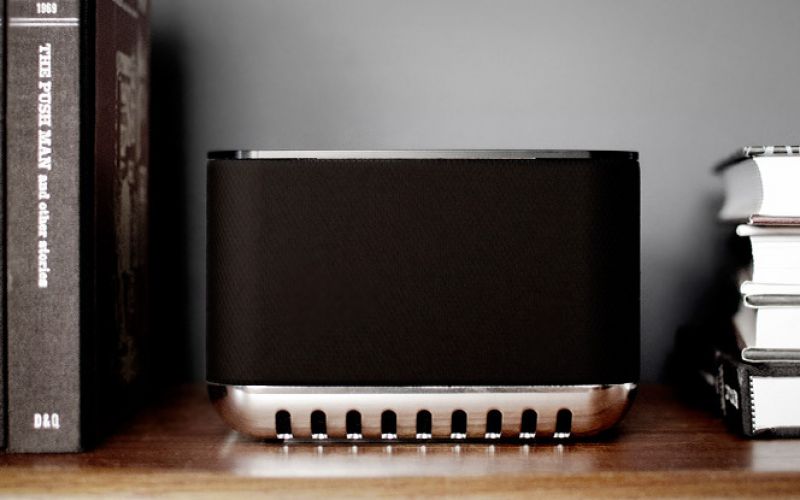 For the Core to perform at its best, you need to place it against a wall, at a slight distance, where it can get help from the walls to bounce off the stereo sound. We tested the same and were blown away by the claim that we could move anywhere around the room and still experience stereo. No doubt the effect does not claim to be 100 per cent working, it definitely is impressive that the single box in the centre can actually make it sound big and equal. This could be because of the way sound actually interacts with objects in its path. As stated earlier, the Core needs to be placed against a wall, and more importantly in the centre of the wall so that it can perform the best. It needs an equidistant space between the side walls so that the audio quality is the best and we don’t lose out on the stereo effect. Placing the Core in the centre of the room or against a corner still gives you the stereo effect, but not as expected. The Core could behave differently in different rooms, but nevertheless, you won’t be disappointed. Reason — the technology being used and the quality of the audio being pumped out. 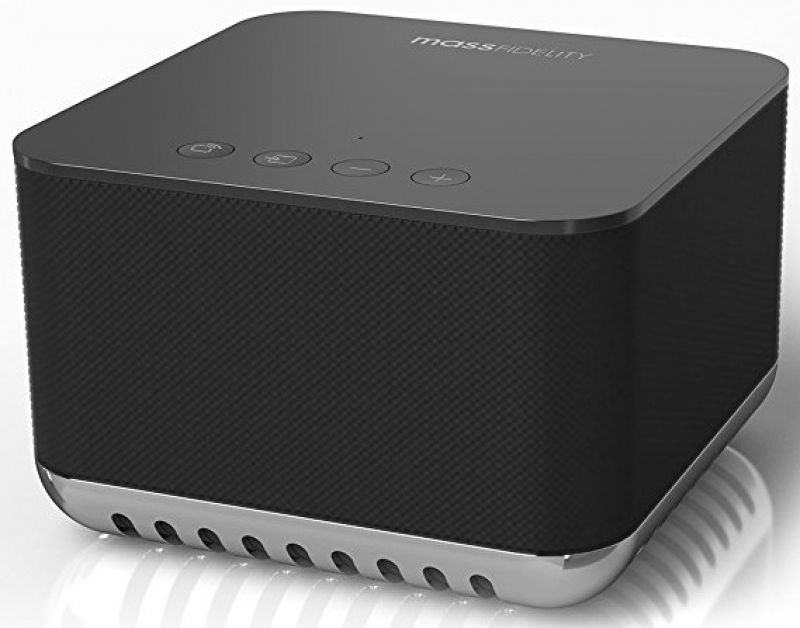 Audio quality delivered from the Core is simply great and we were trying our best to nitpick on any topic we could. We love bass heavy music, and the Core is not meant for that oomph — but we still did not manage to complain. We played a couple of too many audio tracks with multiple genres and enjoyed almost each and every one of them. The bass isn’t too thumpy but is not low either. We could say that the bass is sufficiently there for even those who enjoy deep bass. The bass driver inside the speaker is small and you can expect only a certain amount of bass from it. However, if you want a deeper bass with a stronger thump, Mass Fidelity’s subwoofer, the Core Sub, will give you all you want. Sadly, the Sub is not yet launched in India and we are eagerly waiting to get our hands dirty on the sub. We have heard it is something different. 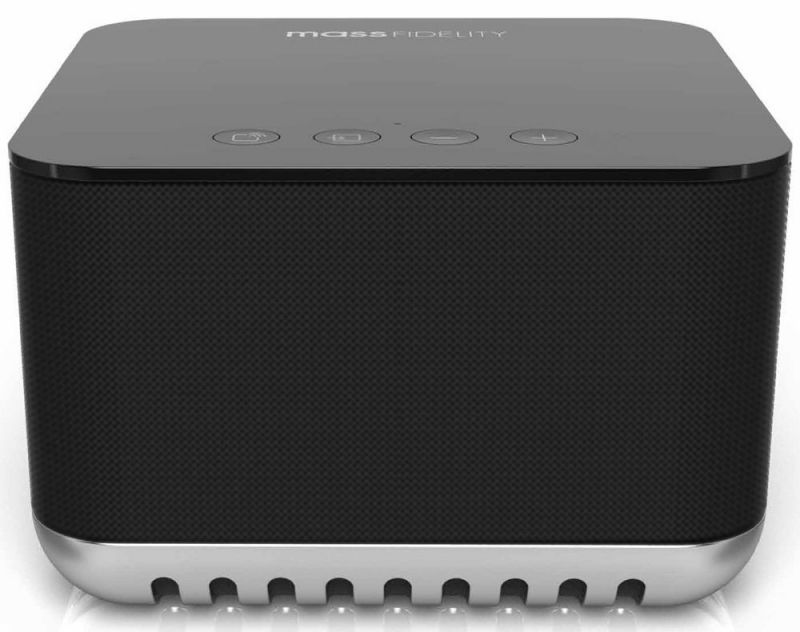 Back to the Core again, and we can state that the mids and highs are also equally good enough. We found absolutely no distortion at high levels, no mixing of sounds, almost nothing. Yes, at lower volumes, the bass isn’t prominent and tends to lose out.

Watching movies using the speaker was bliss. The vocals were crisp and clear, whilst still maintaining the highs and lows in the background. But if you are using this speaker with your television, refrain from using the Bluetooth mode (if your TV supports it) as the audio delay/lag will ruin your experience.

Since the Core is self-powered with a 12-hour long battery, and since it has a tiny form factor, the speaker can be highly portable too. It offers the convenience of using it outdoors with great ease. 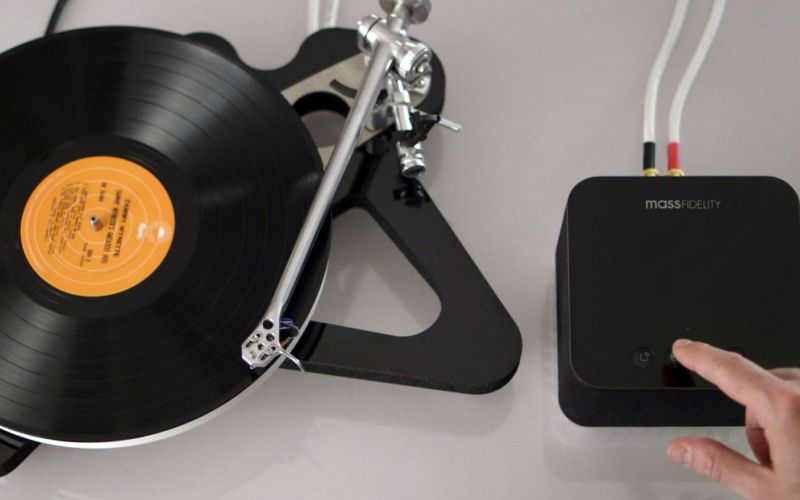 One may argue that there are better sounding speakers with a lower price tag. Though this may be true to an extent, we can presently vouch for the Core as we are listening to it in person. For the price of Rs 33,999, the Core is definitely not cheap, especially when you compare the price to the size of the speakers. Audio quality is completely subjective and the preference will differ from person to person. However, if you get a chance to have a personal demo with the Core, we would suggest that you don’t miss out the opportunity. Tiny speakers are no more at the bottom of the charts — they can equally rub shoulders with big guns in the industry. The Core is definitely expensive, but it would probably have to justify the price from the technology it incorporates and the hard work put in by the engineers. With a slick design and impressive audio performance with capabilities to play in multi-room groups, the Core is definitely a product we would love to take home — only wish the price was lower.