Metro Exodus is a wonderful game, one definitely worth trying if you like post apocalyptic settings and shooters. 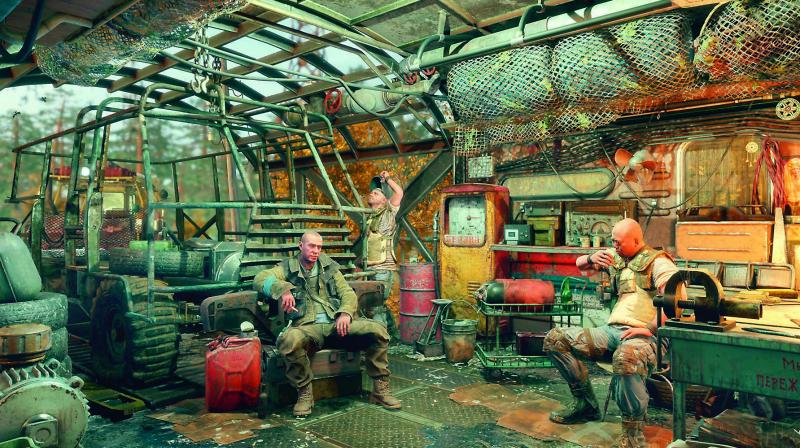 Metro Exodus gains and loses a bit by moving out from its setting in the Moscow underground. The thriving communities and quirky individuals from the underground are sorely missed, but you can get a slight taste of it as you explore the aurora while moving from area to area.

Metro Exodus finally takes the adventure in post apocalyptic Russia out of the sprawling underground tunnels of Moscow and into a rather stunning wasteland.

Soon after the start of the game you journey aboard an old Soviet stream train, the aurora as you make your way across Russia with stunning views of the Volga and a massive dessert in place of what used to be the Caspian Sea.

It’s a welcome shift from the somewhat linear experience Metro fans are used to with a good amount of freedom to explore areas, if not the whole map in one time. Most regions can be explored easily, but the beauty is in the detail of the world. Each location feels unique and you can see how much work has gone into making it a stunning experience.

The overall gameplay has some light survival elements with scavenging, worrying about gas masks and crafting ammunition, but you won’t find something in depth like Red Dead Redemption 2. The combat will excite you at the core of your Metro Exodus experience, but it’s not too well developed. While your backdrop and the stakes of each mission or stage of the game keep shifting, it ends up as one fire fight after another.

While that’s not necessarily a bad thing, I wish it would have been a slightly deeper experience.

The voice acting lets Metro down a little, while English isn’t perfect and there’s too much happening to be able to enjoy it in Russian.

Aside from combat and exploration, there are a few new features that complement the larger scale of Metro Exodus. Binoculars allow you to explore areas from vantage points and points of interest. There are ziplines as well to make travelling a little easier and some of the larger areas have vehicles as well, but don’t get used to them.

Metro Exodus gains and loses a bit by moving out from its setting in the Moscow underground. The thriving communities and quirky individuals from the underground are sorely missed, but you can get a slight taste of it as you explore the aurora while moving from area to area. Overall, it feels like a bit more standard post apocalyptic game with shanty towns, bandits and marauders and your list of weird mutated creatures out to eat you. Where Metro Exodus stands out is in creating a stunning world, freed from the shackles of its underground world. One that looks absolutely stunning with NVIDIA’s real time ray tracing on the newest RTX GPU’s; while it’s brilliant what they have achieved, it’s not the biggest selling point for anyone.

Overall, Metro Exodus is a wonderful game, one definitely worth trying if you like post apocalyptic settings and shooters. Don’t let the PC epic store exclusivity put you off, it’s worth playing regardless of the platform.