Amazon.com Inc is expanding its transportation prowess to do virtually everything short of building a car. 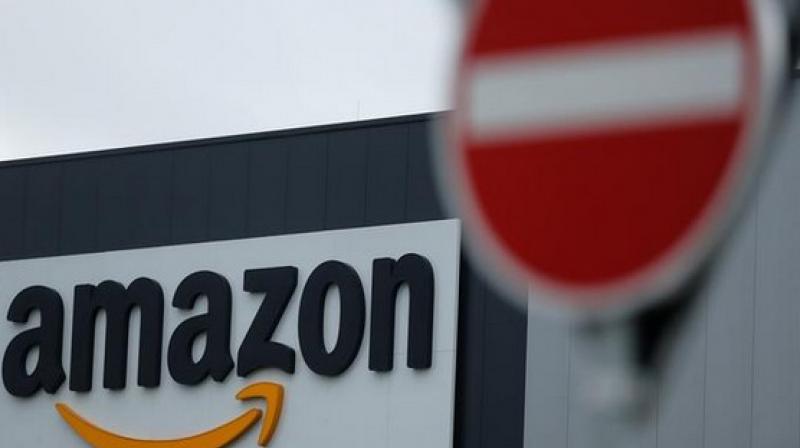 Amazon.com Inc is expanding its transportation prowess to do virtually everything short of building a car.

While Amazon founder and CEO Jeff Bezos has said little publicly about the company’s ambitions in the sector, the strategy is aimed at leveraging Amazon’s strengths in logistics, cloud computing and digital services together with new interests in related fields from robotics to manufacturing, according to more than two dozen people, including Amazon executives and industry executives familiar with the strategy, and a Reuters analysis of Amazon’s patent activity.

With these new investments and alliances up and down the auto supply chain - and by hiring key auto industry veterans and amassing a robust patent portfolio - Amazon is positioning itself to challenge corporate customers and partners ranging from United Parcel Service Inc to Uber Technologies Inc. 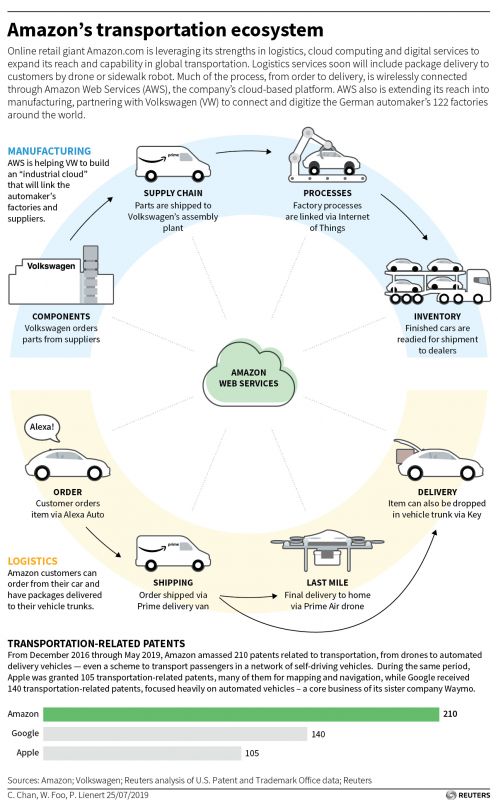 Businesses such as Amazon Web Services and Fulfillment by Amazon started as internal efforts to cut costs and improve efficiency in serving consumers, and later expanded to corporate customers. However, companies working closely with Amazon also risk losing business to the online retailer as its transportation expertise grows, according to some analysts and industry insiders.

Corporate customers “should be very scared” of Amazon’s move into the dashboard, said John Ellis, a transportation consultant and former global technologist at Ford Motor Co. As consumers pay less attention to horsepower and more to streaming content and services, he expects more consumers “won’t really care whether you’re in a Ford or a Chrysler or a Chevrolet or a BMW.”

Ned Curic, a former Toyota Motor Corp executive recruited by Amazon to oversee Alexa Auto in 2017, said in a written response to Reuters that the company is “always looking for ways to more closely integrate Amazon services if we think it’ll bring value to the customer.”

A Reuters analysis of more than 5,000 patents granted to Amazon from December 2016 through May 2019 by the US Patent and Trademark Office indicates at least 210 of those patents cover transportation-related topics from drones to automated ground vehicles. The auto-related patent push outpaced tech rivals Apple Inc and Alphabet Inc’s Google, whose sister company Waymo is a self-driving pioneer.

Amazon was granted several patents that involve the transport of passengers, including a 2017 patent to provide an on-demand transportation service through a network of self-driving vehicles - a potential competitor to Uber, Lyft Inc and Waymo, as well as major auto customers such as Volkswagen, Ford and General Motors Co.

Patents do not always evolve into specific businesses and processes, Amazon said.

“Like many companies, we file a number of forward-looking patent applications that explore the full possibilities of new technology. Patents take multiple years to receive and do not necessarily reflect current developments to products and services,” an Amazon spokesman said in a statement.

In the past two years, Amazon has built out its transportation ecosystem further with the acquisition of three startups — Dispatch, Canvas and Tapzo — while investing hundreds of millions of dollars in at least nine others, including Shuttl, an Indian company developing an app to help commuters find seats on buses.

Amazon’s business partners in the sector include automotive suppliers such as Aptiv, Panasonic Corp and Nvidia Corp, big transportation providers such as Uber and Avis, and self-driving heavy truck startups Embark and China’s TuSimple.

The company, through its USD 33 billion Amazon Web Services unit, also is rapidly expanding its business with corporate customers, notably through two major cloud-based initiatives this year with Ford and VW.

The strategic alliance with VW, which includes German supplier Siemens AG, aims to create an “industrial cloud” to digitally connect the automaker’s far-flung manufacturing operations - 122 plants worldwide - and up to 30,000 supplier factories, according to Jonathan Allen, head of professional services in AWS’ global automotive practice.

AWS has been one of Amazon’s fastest-growing, highest-margin businesses and provides a platform for corporate customers - from BMW and Toyota to Avis and Formula One - to manage, analyze and in some cases monetize data.

Gavin Sherry, CEO of Ford’s Autonomic web services subsidiary, said the No. 2 US automaker can learn a lot from Amazon, which is working with Autonomic and Ford to build a cloud-based platform for the transportation industry.

“They have the relationships, credibility and know-how that we will need in order to fulfill our vision,” he told Reuters.

Alexa, Amazon’s digital assistant, is taking a leading role in the company’s drive to get inside cars.

Amazon is collaborating with a number of automakers to embed Alexa in vehicles, and has made deals with GM, Ford, Volvo and Honda Motor Co Ltd to allow online orders to be delivered to owners’ cars.

“Our goal is to bring Alexa to as many vehicles as possible, either through direct integrations with automakers or through automotive accessories with Alexa built in,” Curic said.

“We have a lot of work to do,” Curic added, including “bringing Alexa to more vehicles and accessories, building new Alexa features for the car and launching our own automotive product, Echo Auto.”

Beyond Alexa Auto, much of Amazon’s focus has one clear theme: cutting the cost of transporting packages, mainly through the company’s Prime and Prime Air delivery and freight services.

It has strengthened those capabilities with the addition of Amazon delivery vans and cargo planes. Its investments in Rivian, which has designed a flexible electric truck architecture, and Aurora, which is developing a software “driver” for autonomous vehicles, point to eventual development of self-driving, electric delivery vehicles, analysts said.

Amazon, which spent more than USD 8 billion in shipping costs last quarter, is building out the entire logistics infrastructure through the automation of its warehouses, long-haul truck shipments and last-mile deliveries with Scout robots and aerial drones, according to public records.

Electric vehicles are also now a part of Amazon’s strategy for connecting homes to its network. Amazon is supplying home charging systems for Audi’s e-tron mid-sized electric SUV - a deal that could be a step toward managing vehicle fleets, said Roland Berger partner Stephan Keese.

One frequently mentioned concern - common to Amazon, Google and Apple - is the security and privacy of data collected from vehicles and their occupants.

Curic said voice data collected by Alexa from consumers is used by Amazon “to deliver and improve our services.”

Data gathered through Amazon Web Services “is absolutely secure and confidential,” said Curic. “No customer, including Amazon’s Consumer business, has access to any other AWS customer’s data.”

Allen told Reuters AWS is working with corporate customers to provide advanced data analytics and build services that could generate revenue from the data and enhance the customer experience.

“That’s going to lead to monetization” of data by those companies, Allen said.