Technology   In Other news  01 Aug 2020  Tech This Week | What we learned from the US antitrust inquiry
Technology, In Other news

Lawmakers seem to be catching up with technology and so will regulation, so Big Tech should not take things for granted. 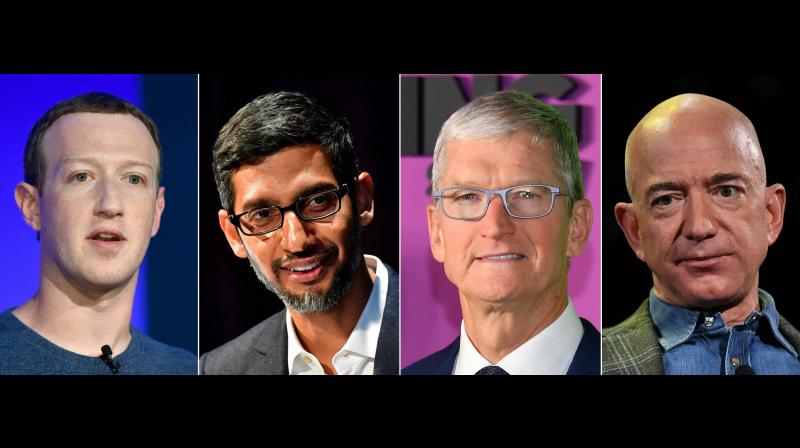 Pressure has been growing both from the right and the left—and sometimes internally—to do something about the overwhelming dominance of the internet platforms. In this photo, Mark Zuckerberg, Sundar Pichai, Tim Cook and Jeff Bezos. The four CEOs on Wednesday attended an antitrust hearing of the US House Judiciary Committee. (Photo | AFP)

This week gave us one of the most significant developments in antitrust that we have had in a long time. The CEOs of Google, Apple, Amazon, and Facebook publicly sat down for an antitrust inquiry. As a general principle, I try to stick to developments that can have the most significant impact in India. However, the issue with technology, and with events such as this, is that they can have ripple effects in how these companies operate around the world (including India).

Before the hearing began, two major points struck me. Firstly, it seemed a bit unfair that all four CEOs had to be questioned at the same time. Given how different the nature of each company is, it did not seem fair to address them all in six hours. Secondly, I predicted that going by an Apple commissioned report, the hearing might be an exercise in cross-talking.

To some extent, I was wrong on both fronts. To their credit, Congress covered a lot of ground in six hours. Yes, some points annoyed me. Specifically, when a number of congressmen/women did not seem to register that this was an antitrust hearing. They thought it okay to ask questions regarding conservative bias on platforms. This does not come under the ambit of antitrust. It not only wasted very valuable time but also accomplished absolutely nothing. At one point, someone raised the question to Mark Zuckerberg on why one of Donald Trump Jr’s Tweets was censored. I get that Twitter commands a considerable space in the political domain, but this was just not the platform to have any of this line of questioning.

However, all that aside, the subcommittee had over a million documents to process and got in a lot of substantive questions. It is a testament to that research that the antitrust law in the US might be changed to account for big tech. The most telling sign for me was the conclusion of the hearing itself. Chairman David Cicilline concluded by saying that, “…These companies, as it exists today, have monopoly power. Some need to be broken up, all of them need to be properly regulated”.

Also there was not a lot of cross-talking at the event, contrary to my prediction. Instead, there was some amount of deflection where the CEOs promised to not know about a particular incident or promised to get back on the matter once they knew more.

It is a long road to actual change in this area. The Congress in the United States has many powers but breaking up companies is not one of them. Instead, Congress will aim to change the law around this issue, updating it for the current era. If and when this will happen is anyone’s guess. For all of these companies, the future might be determined by who wins the upcoming presidential election.

One commonality that hit me during the hearings was how much the questions cantered around abuse of dominance. The argument was that being big in itself is not a crime; instead, the abuse of size is. And this manifested itself in the lack of platform neutrality everywhere, except for Facebook.

This tells me that there is a general consensus around the power these companies hold and concern on how this dominance is exercised. To some extent, this does not apply to Facebook as much. As Casey Newton pointed out in the Vergecast, Facebook’s antitrust problems mostly exist in the past. Such as, should they have been allowed to acquire Instagram (and unjustifiably to a lesser extent) WhatsApp. But since the deals were approved according to the standard of that time, it does not make sense to shift the goalposts and punish them for it now.

My broad takeaway from the hearing is that the Congress is learning more about big tech, and regulating platforms is becoming a bipartisan issue. It is a marked improvement from the previous hearing with Mark Zuckerberg. As a reminder, Congressmen at the time had asked how Facebook was able to sustain a business model where users did not have to pay for the product. To which Zuckerberg responded ‘Senator, we run ads’. The moment was so iconic that Facebook employees put that on a t-shirt. But this hearing is the most definite sign that regulation is beginning to catch up with developments in technology. Let us not take that for granted.