Google is doodling in the New Year in its traditional party animal style. 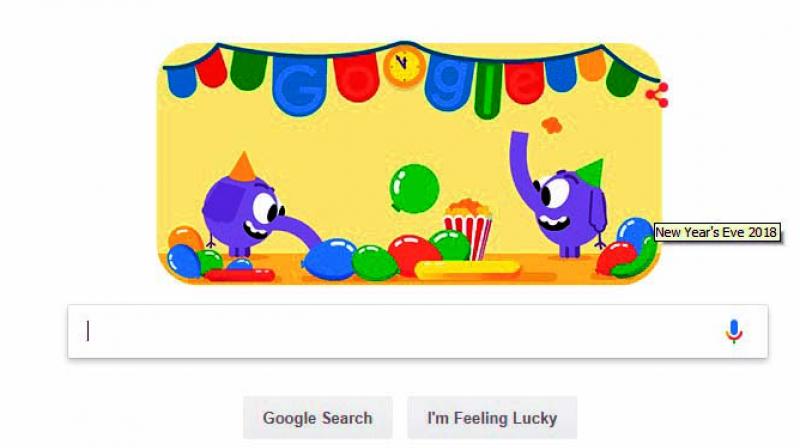 Google in years past has created New Year’s Eve Doodles that feature birds, but this year the search giant chooses baby elephants to welcome 2019.

Like writing, creativity too comes with its ‘writer’s block’. Coming up with something different and unique everyday is not an easy job. However, Google Doodle, with some of its finest designs and gorgeous illustrations, kept us in awe.

As 2018 draws to a close and the world is busy celebrating the New Year’s Eve, Google is doodling in the New Year in its traditional party animal style.

Google in years past has created New Year’s Eve Doodles that feature birds, but this year the search giant chooses baby elephants to welcome 2019.

Monday’s animated Doodle stars a pair of pachyderms happily using their trunks to prepare for their party — one blowing up a mammoth pile of colourful balloons, while the other enjoying a box of popcorns.

You are just a click away from all the places where people all across countries are waiting for New Year 2019. The doodle is at your service.

The Doodle aims to replicate the way most people bring in New Year’s Eve around the world, which can also be described as gathering of friends and family.

One of the coolest elements of this Google Doodle, marking the New Year’s Eve 2018, is the clock at the top that replaces the second ‘O’ in the Google brand name.
The clock is set to 11.59 pm and Google says, “At the stroke of midnight, it’s out with the old and in with the new” in the description for this Doodle.

If one chooses to look little closely at the purple baby elephants in hats, there are a few things just beyond the cute doodle — some unsaid messages and promises before we kick start a new year.

While we celebrate surviving another trip around the sun, it’s also important to survive this last day of the year, especially when we are a party animal too.
If we plan to drink, let’s plan not to drive.

We have options of either staying over a relative’s place or booking a cab to home, or just crashing on a nearby friend’s couch which is better than crashing on the road, any given day.

Last year, Google’s NYE Doodle featured a family of penguins and parrots ringing in the new year with sparklers.