Technology   In Other news  04 Jul 2018  Atos and the CEA place Tera 1000, the powerful European supercomputer
Technology, In Other news

Atos and the CEA place Tera 1000, the powerful European supercomputer

Tera 1000 thus becomes the most powerful European general-purpose supercomputer, with a computing power of 25 petaflops. 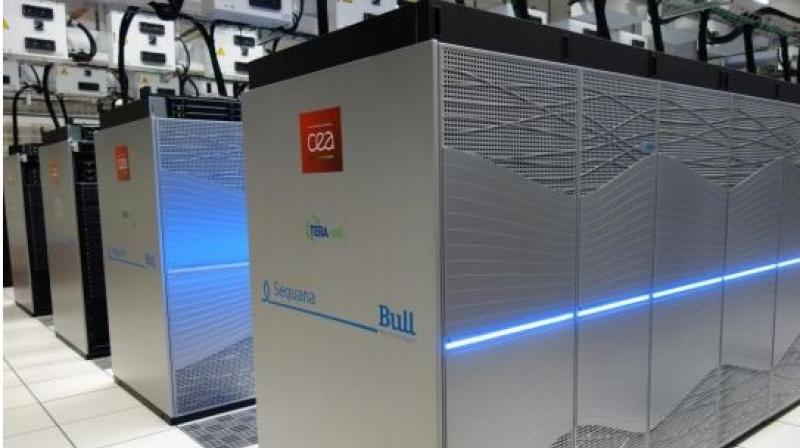 The Tera 1000 supercomputer, operating at the CEA/DAM Center in Bruyères-le-Châtel, Ile-de-France, France CEA.

Atos, an international leader in digital transformation, and the CEA (French Alternative Energies and Atomic Energy Commission)’s direction of defence applications (CEA/DAM) place Tera 1000 - a supercomputer they developed together for defence and nuclear deterrence uses - among the world’s 500 most powerful machines. Reaching the 14th position, Tera 1000 thus becomes the most powerful European general-purpose supercomputer, with a computing power of 25 petaflops and a very competitive power consumption of 4 MegaWatts.

This result crowns the expertise acquired by the CEA/DAM and Atos in High-Performance Computing (HPC) and the co-design strategy initiated some 18 years ago by the two partners, working together as top contenders in the international competition towards exascale capacities - reaching a billion calculations per second.

Developing an exaflop-class supercomputer by 2020 is a necessity for some of the defence programs implemented by the CEA/DAM. To reach this capacity, technological breakthroughs are needed - most notably to maintain low levels of energy consumption, one of the key challenges in the high- performance computing market, but also to ensure smooth information flows and process the significant volumes of data produced by increasingly precise simulations of multi-physical, multidimensional phenomena.

Deployed in two stages at the CEA centre in Bruyères-le-Châtel (Île-de-France), Tera 1000 has a 25- petaflop computing capacity and best-in-class energy efficiency for a large range of applications - an achievement made possible through the use of technologies developed by Atos for its line of BullSequana X supercomputers. BullSequana uses an innovative cooling technology, using streams of lukewarm water circulating in close proximity to processors. A single BullSequana module can deliver almost three-quarters of the computing power of the Tera 100, the supercomputer that was formerly in use at the CEA/DAM, with an energy efficiency improved by a factor of 25.

François Biletnikoff, the director of defence applications at the CEA, says: “Once again, the partnership between Atos and the CEA/DAM has allowed a major technological milestone in the power capacities of supercomputers. With the Tera 1000, we have very significantly increased the quality that digital simulations can attain for defence applications, but also for research and industry uses. This step opens the way to the exaflops in the coming decade.”

Pierre Barnabé, Chief Operating Officer of Atos’ Global Big Data & Security Division, adds: “Atos is very proud to help France and Europe gain international prominence in supercomputers and to provide the CEA with the computing power they need to develop quality innovative research. This spot in the top-500 ranking reflects the successful collaboration between Atos and the CEA, and is one of the best examples of Atos’ technological excellence in high-performance computing.”

The full ranking can be found at https://www.top500.org/

• The first one, relying on Intel Xeon V3 processors, has been in production since 2016

• The second one uses latest-generation BullSequana, based on Intel Xeon PhiTM Knight Landing processors connected with a very-high-performance Bull X Interconnect(BXI) network, a result of the R&D collaboration between the CEA/DAM and Atos

The second layer of Tera 1000 marks a breakthrough in the parallel setups used for its 540,000 computing cores. Its architecture prefigures those that will be used in the next CEA/DAM computer, EXA1, by 2020.