The new normal: Migrant workers and Kota students going on hunger strike to be sent home and online petitions circulated against fee hikes 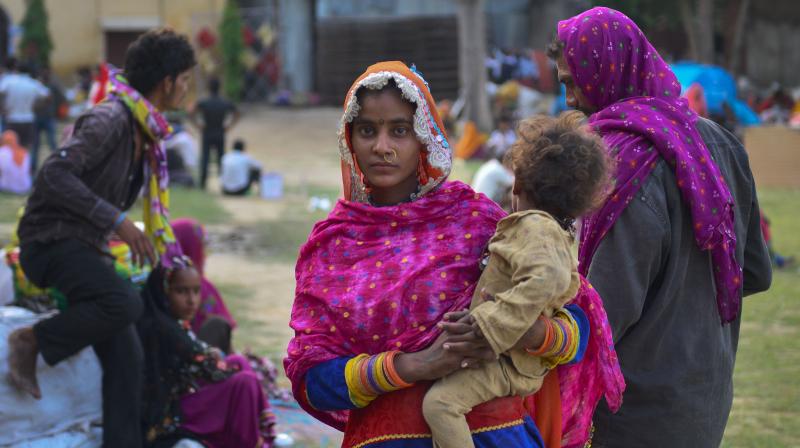 Over 1,200 workers from Jammu and Kashmir who had completed their 14-day quarantine period at various camps in Punjab's Pathankot district had gone on a hunger strike for three days, seeking to be sent to their home towns in the Union Territory. In this photograph, migrant labourers in Allahabad with their families rest at a temporary shelter after arriving from various districts while waiting to board specially arranged government buses to return to their homes on April 30, 2020. (Photo | AFP)

New Delhi: From at-home hunger strikes to sloganeering from terraces, trending hashtags to video campaigns and online petitions — protests in the country have adjusted to the lockdown by moving either indoors or to the virtual world.

Several protests and mass movements across Delhi and the country were at their peak when the coronavirus threat slowly crept in, throwing normal life out of gear and pushing everyone indoors to ensure social distancing.

However, voices still need to be raised against issues and injustice, say several protesters who have attempted to make their voice heard despite the lockdown imposed to combat COVID-19.

Innovative protest methods are being used not just by citizens and activists, but also politicians, who are experimenting with unique ways to target opponents, including observing fasts and hoisting the tricolour on rooftops.

In April, scores of students stuck in different hostels and paying guest accommodations in Rajasthan's coaching hub Kota protested from their respective terraces, demanding that they be sent home.

“We formed circles on terraces of our hostels or PGs and wearing masks we staged protests there ensuring social distancing. We held posters and shot videos of us raising slogans about our demands of being evacuated from here. And I must say the collective effort worked and the government did pay attention to our issue gradually,” Rishika Jain, an engineering aspirant who was stuck in Kota, told PTI.

Over 1,200 workers from Jammu and Kashmir who had completed their 14-day quarantine period at different camps in Punjab's Pathankot district also went on a hunger strike for three days, seeking to be sent to their home towns in the Union Territory.

JNU students, who are at the forefront of various protest movements, are continuing their momentum by taking their agitations and campaigns online.

“The need to object and fight for our rights cannot rest or be put on hold because of the lockdown. And it’s a lockdown only for citizens, police have been active in cracking down on activists, slapping sedition charges and other draconian acts,” a JNU student said.

The JNU Students Union chief Aishe Ghosh, said, "During this very lockdown, they confiscated the mobile phone of our colleague Kawalpreet Kaur, they arrested Jamia students. Rather than intensifying efforts to mitigate the humanitarian crisis that has emerged during the lockdown, the government is busy cracking down on activists.”

“We have launched an online campaign, where we are holding posters and the pictures are being uploaded on social media to trend a particular campaign and let our voices be heard,” she added.

The Left backed All India Students Association (AISA) has launched various campaigns, including 'Attack Corona not Activists', 'Stop Student Witchhunt', 'Drop UAPA' and a movement demanding the release of Safoora Zargar, a pregnant activist arrested for protesting against the violence targeting Muslims in Delhi in February over the country's contentious Citizenship (Amendment) Act.

Telugu Desam Party MLA Gadde Rammohan and his wife and party leader Gadde Anuradha went on a 12-hour hunger strike demanding that the government pay Rs 5,000 each to the families that have lost their livelihoods due to the lockdown.

On May 1, Punjab Congress leaders hoisted the tricolour on rooftops of their homes to protest the Centre's alleged discrimination against the state in extending fiscal support to fight the COVID-19 crisis.

The BJP's Punjab unit countered the Congress's spectacle, with its leaders and workers observing a fast claiming that the state government was not distributing foodgrains to the poor and the needy during the lockdown.

Several online petitions have been started by active citizens during the period, including against fee hike by schools, non-payment of salaries by employers and discrimination by landlords against tenants involved in essential services, among others.