Gamescom under the radar

While the world was occupied with the biggest publishers and franchises in gaming, Gamescom2018 provided a few gems that went under the radar. 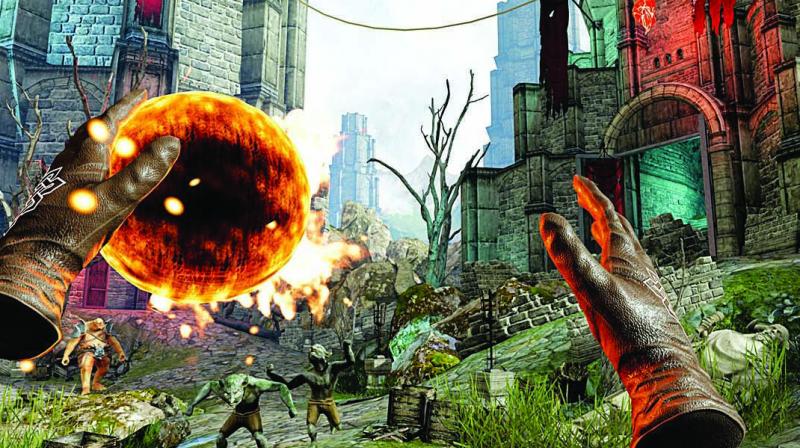 The Wizards is a VR game on PSVR.

Ride 3
At Gamescom, I got to play two tracks of Ride 3. I had a glimpse of the career mode, which was presented as a collection of magazines, with stars being awarded for your performance. I found Ride 3 to be punishing, as the game forced me to learn from my mistakes; but also rewarding for whenever I managed to make a good turn. The main game is supposed to have over 230 bikes to choose from and 30 tracks from all over the world.

The Elder Scrolls: Blades
I was pretty sceptical of The Elder Scrolls: Blades when it was first revealed at E3 but after playing it at Gamescom, some of my apprehensions were indeed lifted. It controls well for a mobile game and could be a fun way to pass time when you’re bored or while travelling. You move by tapping on the screen and upon initiating combat, you are taken to a battle screen of sorts where you can attack by holding that part of the screen until two circles intersect. I was pleasantly surprised by Blades and will definitely be checking it out upon release.

The Wizards
The Wizards is a VR game on PSVR. The game uses a teleportation button for movement and quick snap for changing your directions. I had no trouble in getting used to the controls as they were intuitive and well designed. I also did not feel motion sickness, even when I was quick teleporting during combat. In the demo, there were a couple of intense fights with three or more monsters that had me teleporting all over the place as I quickly changed directions and threw fireballs. It was a short yet fun experience.

World of Tanks AR
While AR is still some time away as the tech catches up, World of Tanks’ AR does a great job of showcasing not only the potential of AR tech, but also what the talented folks over at Wargaming are capable of! The demo was running on an iPad Pro with a makeshift wire arrangement, but worked wonders. It essentially allows you to spectate a World of Tanks replay file loaded onto the AR Spectate app for an amazing birds eye view of the battlefield with full high resolution images streamed from the host PC.

Tags: the elder scrolls, the wizards, world of tanks ar