Technology   In Other news  06 Apr 2020  Get quick bites of comedies, dramas on your phone, Quibi launches with 90-day free trial
Technology, In Other news

Get quick bites of comedies, dramas on your phone, Quibi launches with 90-day free trial

After the free period, it costs Rs 669 a month to access the made-for-mobile platform on which you get original content, not tiresome reruns 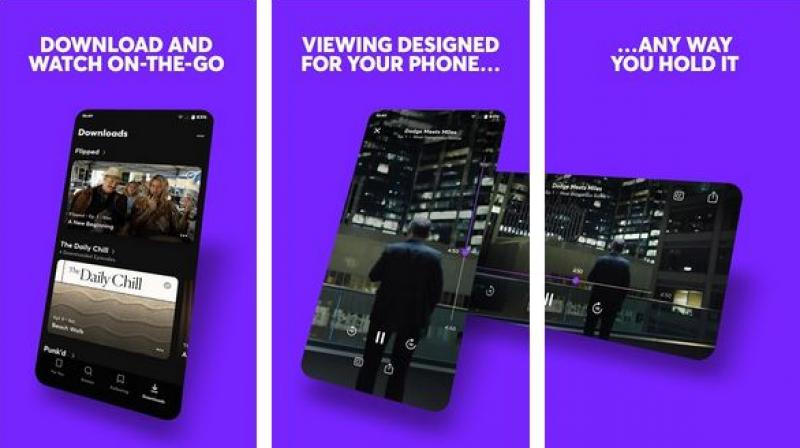 All content is available for download, and you can watch in portrait or landscape mode as Quibi is designed especially as a mobile streaming platform.

San Francisco: Quibi, the streaming platform that gives you (Qui)ck (Bi)tes of entertainment, has launched worldwide. After a long 90-day free trial, in India Quibi will be available for Rs 669 a month.

Perfect for our short attention span, Quibi began streaming short-form comedies, dramas and entertainment on Monday and is likely to appeal to those who like a punch packed in small packages—such as the award-winning and highly regarded Omeleto short films on YouTube.

Major studios have invested about USD 1 billion into Quibi, which has already attracted Hollywood names such as Steven Spielberg, Guillermo Del Toro and Jennifer Lopez.

Amid signs of a deepening economic slump, Quibi last month extended its two-week trial period to a 90-day offer. After that a monthly subscription will cost Rs 669 in India, NDTV reported. Executives promised that no more than 2.5 minutes of ads would be shown hourly.

Quibi was founded by Jeffrey Katzenberg, a longtime Disney executive and co-founder of DreamWorks SKG, and former eBay chief executive Meg Whitman, who is the CEO of the new service.

All Quibi content -- from comedies to documentaries, sports and news -- was original and being produced "by the biggest names in Hollywood," he said earlier this year.

With 50 shows available at launch, and 175 originals in the works, Quibi made the decision to stick with its launch plan.

Quibi will release one "chapter" per day of its key shows, with the aim to rekindle the "water-cooler moments" of traditional television.

Quibi is intended as a "personal service" so accounts are meant for individuals, not to be shared. All Quibi content can be downloaded for viewing offline, taking pressure off mobile data networks if users are shrewd enough to use Wi-Fi hotspots to get episodes.

Early access to Quibi showed a variety of offerings from news and comedy to thrillers and documentaries, giving recommendations based on viewing and inviting searches by genre or show names.