Technology   In Other news  06 May 2020  Trump supporters on Facebook spreading QAnon conspiracy theories kicked off social media platform
Technology, In Other news 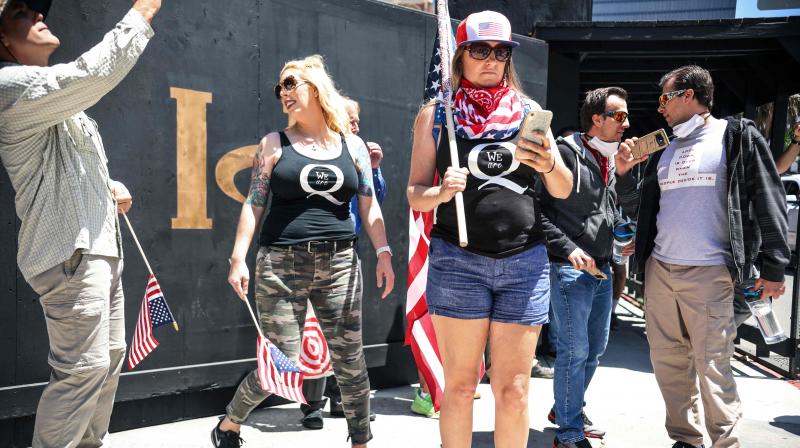 Conspiracy theorist QAnon demonstrators protest during a rally to re-open California and against Stay-At-Home directives on May 1, 2020 in San Diego, California. (Photo | AFP)

Oakland (California): Facebook says it has removed several groups, accounts and pages linked to QAnon, taking action for the first time against the far-right US conspiracy theory circulated among supporters of President Donald Trump.

The social-media giant made the announcement Tuesday as part of its monthly briefing on “coordinated inauthentic behavior” on its platforms. That’s Facebook’s term for fake accounts run with the intent of disrupting politics elections and society.

In addition to the QAnon accounts, Facebook also removed accounts linked to VDARE, a U.S. website known for posting anti-immigration content, as well as accounts in Russia, Iran, Mauritania, Myanmar and the country of Georgia.

QAnon is a right-wing conspiracy theory centered on the baseless belief that Trump is waging a secret campaign against enemies in the “deep state” and a child sex trafficking ring run by satanic pedophiles and cannibals. For more than two years, followers have pored over a tangled set of clues purportedly posted online by a high-ranking government official known only as “Q.”

The conspiracy theory first emerged in a dark corner of the internet but has been creeping into the mainstream political arena. Trump has retweeted QAnon-promoting accounts and its followers flock to the president’s rallies wearing clothes and hats with QAnon symbols and slogans.

Facebook says it found the QAnon activity as part of its investigations into suspected coordinated inauthentic behavior ahead of the 2020 presidential election.

“We are making progress rooting out this abuse, but as we’ve said before, it’s an ongoing effort,” the company said in its April report on coordinated activity. “That means building better technology, hiring more people and working more closely with law enforcement, security experts and other companies.”

Social media research firm Graphika, which receives funding from Facebook, said in a concurrent report Tuesday that the QAnon network promoted conspiracy theories and tried to sell merchandise, such as T-shirts, using Facebook. The network, Graphika said, appeared to be run by a small group of users who had both real and fake accounts.

The network focused primarily on the “Q” conspiracy theory, but dabbled in others _ around the 5G wireless network, the U.S. presidential elections, Bill Gates and the coronavirus, Graphika said.

The research firm found related activity on Twitter as well, but noted that in itself, such activity may not have violated Twitter’s rules. Twitter allows users to post under fake names. A representative for Twitter did not immediately respond to a message seeking comment.