Action taken over 'misinformation', but the American Academy of Pediatrics says children appear to transmit COVID-19 less than adults. 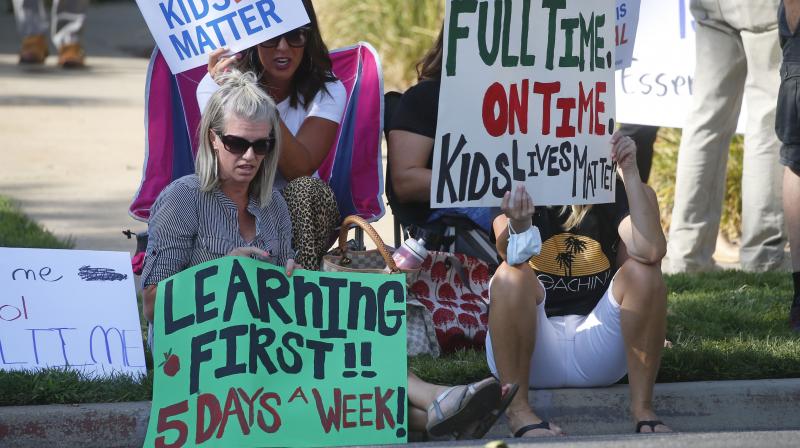 A group of children and parents protested the hybrid reopening of schools because they would prefer children to attend school five days a week, as before the pandemic. How likely children are to contract or spread the coronavirus has become a deeply contentious issue in the US, with reopening schools essential to enabling many parents to go back to work. Children are known to be far less likely to fall seriously ill or die from the virus: less than one percent of children who test positive for COVID-19 end up dying, according to a Europe-wide study released in June. (Photo | AP)

San Francisco: Facebook and Twitter took aim at US President Donald Trump and his campaign Wednesday over a video post in which he contended that children are “almost immune” to the coronavirus, a claim they said amounted to “misinformation.”

In an extraordinary move, Facebook removed the clip from the president’s account—the first time it has taken down one of his posts for violating its content rules.

The video—an excerpt from a Fox News interview—“includes false claims that a group of people is immune from COVID-19 which is a violation of our policies around harmful COVID misinformation,” a Facebook spokesperson told AFP.

Twitter meanwhile said it had blocked Trump’s official campaign account over a tweet containing the same video, in which Trump made the case for reopening US schools come September.

A spokesperson for the San Francisco-based service told AFP the tweet was “in violation of the Twitter rules on COVID-19 misinformation,” adding that the campaign would have to remove it before being allowed to tweet again.

Soon thereafter, the @TeamTrump account was active, suggesting the contested video had been taken down.

“Another day, another display of Silicon Valley’s flagrant bias against this president, where the rules are only enforced in one direction,” the Trump campaign’s deputy national press secretary Courtney Parella said in a statement.

“The president was stating a fact that children are less susceptible to the coronavirus,” she said. “Social media companies are not the arbiters of truth.”

Health officials have urged people of all age groups to protect themselves against exposure to the coronavirus.

Trump defended his comments about the virus’s effect on children when challenged during a White House press briefing earlier Wednesday.

“I’m talking about (being immune) from getting very sick,” Trump said.

“If you look at children I mean they are able to throw it off very easily.”

How likely children are to contract or spread the coronavirus has become a deeply contentious issue in the US, with reopening schools essential to enabling many parents to go back to work.

Trump has been calling for both businesses and schools to reopen as part of a push to revive the US economy, whose health will play a major factor in the coming presidential election.

A growing number of US school districts have opted however against in-person classes come September, opting to remain online-only until the pandemic has abated.

The American Academy of Pediatrics has concluded that children appear to transmit COVID-19 less than adults, and that many schools could re-open in the months ahead provided they take precautions such as social distancing and tracking local transmission rates.

Children are known to be far less likely to fall seriously ill or die from the virus: less than one percent of children who test positive for COVID-19 end up dying, according to a Europe-wide study released in June.

The study authors said the true percentage is likely much lower still, since many children with mild or no symptoms would not have been tested at all.

Facebook’s move came as it faces intense pressure to clamp down on misinformation—which has flourished during the pandemic—including from world leaders, until recently protected by its hands-off policy on political speech.

A coalition of activists has pressed Facebook to be more aggressive in removing hateful content and misinformation—with 1,000 advertisers joining a boycott aiming to ramp up the pressure.

The social media giant had placed a disclaimer last month on a post from Trump claiming mail-in voting would lead to a “corrupt” election, and in June it removed ads by Trump’s campaign containing a symbol used by Nazi Germany.

Trump has been repeatedly accused of spreading misinformation about the coronavirus pandemic—which has killed more than 150,000 Americans—including the now-infamous musing that virus victims could perhaps be injected with disinfectant.

Twitter last week took the rare step of removing clips tweeted by Trump from a video—earlier deleted by Facebook—in which the doctor-preacher Stella Immanuel and a group of doctors proclaimed that masks are unnecessary and that hydroxychloroquine can defeat the coronavirus.