These 3D-printed Wi-Fi enabled objects do not require power

The new 3D-printed plastic objects can pass on information through Wi-Fi eliminating the need of batteries or electronics. 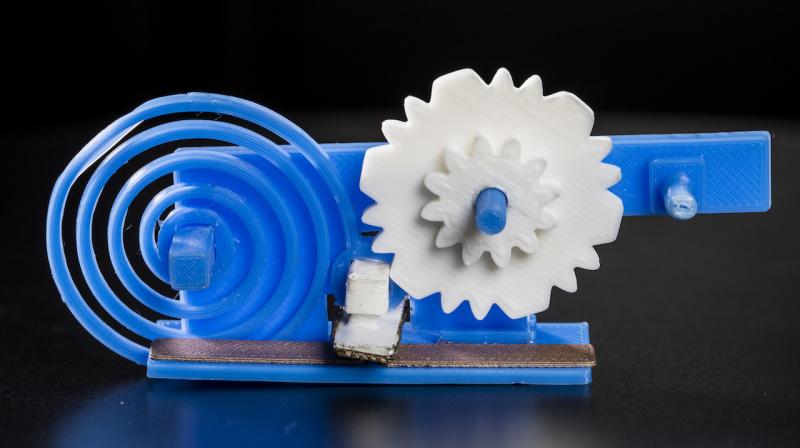 The team developed an anemometer that measures wind speed, and attached it to a gear. When the gear spins, the teeth connect with an antenna incorporated within the object and the antenna then reflects ambient Wi-Fi signal, which is then decoded by a Wi-Fi receiver. (Image: Mark Stone/University of Washington)

Researchers at the University of Washington have developed a new way for 3D-printed plastic objects to pass on information through Wi-Fi eliminating the need of batteries or electronics. They demonstrated how it can be done with commercially available plastics and Wi-Fi receivers.

"Our goal was to create something that just comes out of your 3D printer at home and can send useful information to other devices," says Vikram Iyer, a graduate student on the project. "But the big challenge is how do you communicate wirelessly with WiFi using only plastic? That's something that no one has been able to do before."

To make this thing work, the team assembled things like 3D-printed gears, switches and springs that could be used translate motion into antenna-transmitted information. The team developed an anemometer that measures wind speed, and attached it to a gear. When the gear spins, the teeth connect with an antenna incorporated within the object and the antenna then reflects ambient Wi-Fi signal, which is then decoded by a Wi-Fi receiver.

The signal transmission is dependent on the speed of the wind, the faster the gear spins and the more rapid signals are transmitted. The team also deployed a scale and a flowmeter to measure the speed of the water.

Additionally, three widgets — a button, a knob and a slider, that work similarly and can be used to connect with other smart devices. The researchers also created two smart objects — a detergent bottle with an attached flowmeter to track the amount of remaining detergent and a test tube holder that can measure the amount of liquid.

Lastly, the team developed a way to print iron into 3D objects, which when read using a magnetometer through a smart device, can be used to transmit information about that specific object

"It looks like a regular 3D-printed object but there's invisible information inside that can be read with your smartphone," said Justin Chan, another student on the project.

This team of researchers is making their 3D-printed models available for public so everyone can utilise the new object in their households.