Technology   In Other news  07 May 2020  Wanna find out what this Bitcoin business is all about? Everything you need to know explained here
Technology, In Other news

Wanna find out what this Bitcoin business is all about? Everything you need to know explained here

Bitcoin miners will soon get only half the bitcoins for validating transactions. Find out what that means and how it all works. 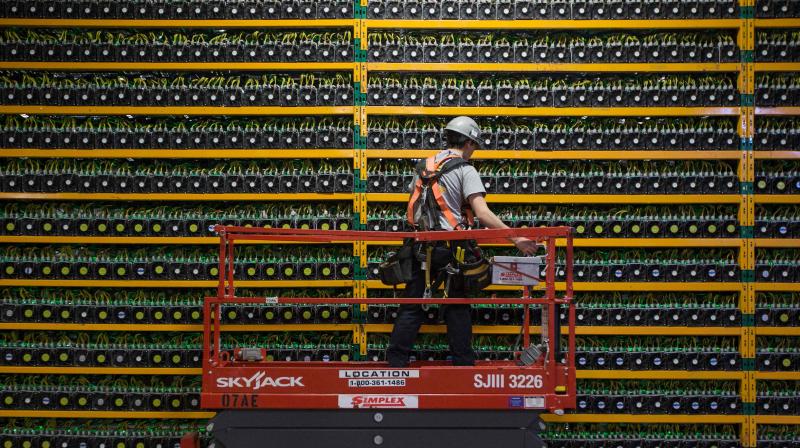 In this file photo taken on March 19, 2018 a technician inspects bitcoin mining at Bitfarms in Saint Hyacinthe, Quebec. (Photo | AFP)

London: Bitcoin miners, whose computer processors enable the running of the world’s most popular virtual currency, will soon face an event that takes place every four years and alters the profitability of the hi-tech industry.

So-called halving is when cryptocurrency-mining companies and individuals find out the reduced payment that they will receive in return for their contribution to the system’s smooth operation.

Bitcoin was created in 2008 by a person or group writing under the pseudonym Satoshi Nakamoto as a peer-to-peer decentralised electronic cash system.

The virtual unit was once the preserve of internet geeks and hobbyists but it has since exploded in popularity, with mining performed by huge banks of computers.

How does mining work

Bitcoins are traded via a decentralised registry system known as a blockchain.

That power is provided by miners, who do so in the hope they will receive new bitcoins for validating transaction data.

The system poses a complex computer puzzle to decide which miner wins the privilege to validate the block and thus receive the reward.

“To understand halving, it is important to remember the role of miners, who are basically responsible for the bitcoin network security,” ThinkMarkets analyst Fawad Razaqzada told AFP.

“Each time a block of bitcoin transaction takes place, they need to be verified by miners. The miner that verifies each block gets a reward for its work with more, newly created, bitcoins.”

This occurs every four years and basically involves the halving of the reward from bitcoin mining.

The cryptocurrency’s first “halving” occurred in November 2012, and the second in July 2016. The third is widely expected to take place around next Tuesday.

“Halving will impact profitability of mining bitcoin because work and resources will need to double in order to achieve the same reward as before,” added Razaqzada.

“However, if the value of bitcoin appreciates significantly then this will offset some of the costs.”

Commercial mining operations often occupy huge hangers or warehouses, and consume large amounts of electricity to power and cool the computers, which is a considerable cost in addition to equipment.

Why reduce the reward?

The reward was originally set at 50 bitcoins but it was subsequently reduced to 12.5 and will likely reach just 6.25 next week.

The amount has been trimmed over time in order to implement an overall global limit of 21 million bitcoins.

“With the supply of bitcoins mandated to eventually reach the limit of 21 million, the creator(s) of the digital currency had decided that these rewards must decay exponentially, otherwise supply will not be controlled,” added Razaqzada.

“So, the network is programmed to cut the reward every 210,000 blocks, or about every four years,” he said, noting that the halving date depended on mining activity.

What is bitcoin worth?

“February and March were rough months for bitcoin like other risk assets, but the digital currency has staged the most impressive recovery,” said Razaqzada.

“This is partly due to the fact some investors consider bitcoin to be a safe-haven asset, while some have undoubtedly bought speculatively ahead of the so-called ‘halving’ event in anticipation (that) we may see the value of the cryptocurrency appreciate.”