Qualcomm ready to move on without Apple

Qualcomm spokesman further alleges that “Apple isn't making the best use of its Qualcomm modems,and makes it slower to match intel's chip 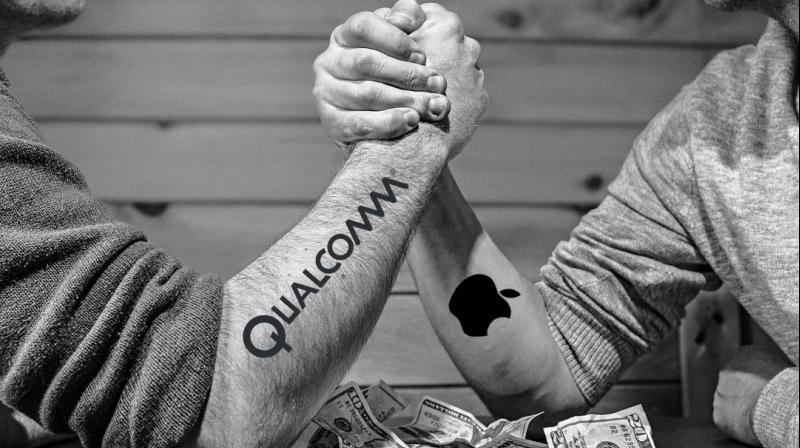 The dispute between Apple and Qualcomm over patents is part of a wide-ranging legal war between the two companies.

Apple’s fight with one of its biggest supplier Qualcomm is in the news for a while and is getting messier day by day. Despite the mutual dependency on each other, there is no solution in sight for the tech giants. According to reports, Apple is even in the process of designing the 2018 iPhone models without using Qualcomm's modem chips.

However, Cristiano Amon, the president of Qualcomm CDMA Technologies (QCT), seems rather relaxed on the whole scenario

"Yes, there's one big OEM that we will continue to work hard to supply some of their volume, but in addition to that, we have seen tremendous growth in China, we have seen tremendous growth in the other customers with Samsung, and then we've seen growth outside the phone space. And on top of that, 5G is coming with a lot of new attributes," Amon told PCMag in an interview at Qualcomm's Snapdragon Summit.

Qualcomm's stock price has gone down amidst the legal tussle with Apple and it is even facing a hostile takeover bid from Broadcom. Previously Apple exclusively used Qualcomm modem chips from the iPhone 4s through 6s generations, the Cupertino giant has now split its business between Qualcomm and Intel for two cycles and may be preparing to go all-Intel in 2018.

"We've been very public in QCT. In early '16 we said, we're modeling our business assuming that a very large OEM is always going to [embrace] multi sourcing, and even multi tiering," Amon said. "It was probably surprising to a lot of people that now that we have a full year of a dual source on that OEM, we saw QCT continue to grow. Just on non-phone business, we probably grew $3 billion."

The bad omens don’t end here for Qualcomm. Samsung and Huawei are also developing in-house modem chips and processors, which mean that world’s top 3 phone makers, may shift the business from Qualcomm in near future, but that's a challenge Qualcomm has faced before, Amon pointed out.

"We may have a different scale now given the amount of concentration we have. No question there's a concentration in the industry on the OEM side. But we always had it. In the early days of even 2G, with Qualcomm CDMA, you had companies like Samsung which had their own CDMA chips, you had Motorola with their own CDMA chip. If you have enough scale that you can afford the R&D in the scale of a semiconductor business you do it. Nokia did it, everybody did it, we always had that."

The phone maker landscape is changing, Amon argued. The rise of Xiaomi, Oppo, and Vivo has opened up new markets for Qualcomm where there were none before, he said.  Qualcomm is also looking far beyond phones. The company's big announcement on the first day of its Snapdragon Summit was a trio of Snapdragon-powered Windows laptops, and the company is currently trying to buy chipmaker NXP to improve its position in cars.

"You can't really predict with any precision that the OEM landscape is going to be like that forever. And when you get to a new generation, like 5G, you may create an entry point for many OEMs in the market. It appears a bigger issue because the market is concentrated, but we will only really be worried if the decision of the market is that there's no more innovation in the phone space. If that's not the case, it's a very dynamic market," Amon said.

Amon further alleged that “Apple isn't making the best use of its Qualcomm modems, anyway. Talking to various experts here, I'm more and more convinced that Apple not only crippled its Snapdragon X16 modems by deciding not to turn on 4x4 MIMO but also tuned the X16 down to match the Intel XMM7480 modem's lesser performance. Our exclusive study of the Qualcomm and Intel iPhone X models found the two devices much closer in modem performance than we saw last year.”

We may or may not see Apple devices continue with Qualcomm components but Amon’s comments do suggest that Qualcomm is ready to embrace the departure.